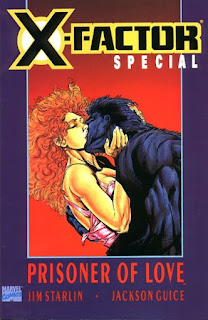 In a Nutshell
A morose Beast gets enchanted by a beautiful alien woman.

Plot
Beast, morose over his monstrous appearance relative to other mutants, is walking the streets of New York when he encounters a beautiful young woman being attacked by muggers. He attempts to save her, but grows weak and falls unconscious. He wakes up in the woman's apartment, and she introduces herself as Synthia Naip, explaining that she took care of the muggers herself. Entranced, Beast is seduced by Synthia, and the pair make love. Hours pass, and Beast becomes weaker even as he is more drawn to Synthia, who won't explain anything about herself beyond admitting that she's not entirely human. That night, Beast dreams of an evil Dark One stalking Synthia, and later, of slaying monstrous forms of his X-Factor teammates to prove his love to Synthia. 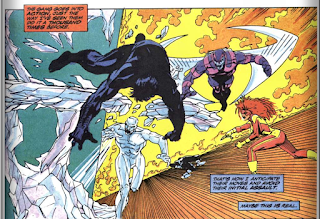 Weeks pass as Beast stays with Synthia, growing weaker, and she eventually reveals that she is an alien being, part of a species that once filled the cosmos but have been hunted to extinction by the Dark Ones. One such being has been pursuing Synthia, forcing her to disguise herself as a female human and drain energy from others to survive, until she met Beast and learned about mutants. As such, he can help her in her battle against the Dark One, as he won't be able to detect Beast. Shortly thereafter the Dark One attacks, and Beast provides enough of a distraction to give Synthia an opening to destroy her foe, revealing in the process her true crystalline form. She thanks Beast for saving her life, and then Beast suddenly finds himself back at the site of the muggers' attack on Synthia, and realizes no time has passed. He wonders if it was all a dream, but then he notices marks left on his hand by Synthia, giving him confidence the experiences were real.

Firsts and Other Notables
This is a prestige format, square bound one shot, written by Jim Starlin, most well-known for being the creator of Thanos and for his trippy, cosmic stories involving Adam Warlock in the 70s and the various "Infinity" series (Infinity Gauntlet, Infinity War, etc.) in the 90s, and with art from Jackson Guice, who helped launch X-Factor with Bob Layton. I assume there's some kind of story behind this issue, as far as whether or not Marvel solicited or if Starlin and/or Guice pitched it, why it was a prestige format one-shot, etc., but if there is, I have no idea what it is.

This is my first time reading this issue, and as a result, I spent many years confusing it with the Beauty and the Beast limited series and assuming that the woman in this story (whom I only ever knew from the cover) was somehow Dazzler.

The female lead of the story is, in fact, Synthia Naip, an alien who came to Earth and took the form of a human woman to seek out help in her battle  with the Dark One. Synthia makes one additional appearance in a Silver Surfer annual (according to the Internet), but that's about it for her or her species. 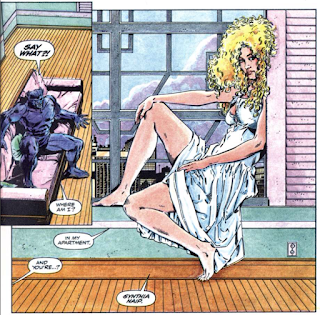 The Chronology Corner
This issue takes place between issues #58 and #59 and X-Factor.

A Work in Progress
Beast references training in the Danger Room prior to a training session with Archangel and Iceman, though of course, they aren't training in the actual Danger Room, which is back beneath the rubble of the X-Mansion (the narration isn't clear on this).

Teebore's Take
Well, that was pretty pointless. Aside from the fact that it has no bearing whatsoever on the development of any characters or plotlines being featured at the time (which probably accounts for the fact that I've been able to go this long without ever reading it and not feel like I'm missing something), I really have no idea what Starlin is even trying to say in this story. Beast's malaise at being a freak kinda plays into his current arc in X-Factor (and is certainly a staple of the character, though his stint in the Avengers years ago more or less brought an end to his "I'm a monster" angst), but most of that current misanthropy stems from his dissatisfaction at Trish's reporting involving mutants (and what that says about their relationship), which of course isn't brought up at all in this story of Beast getting psychically roofied by a random alien.

Plus, the events of this story are called into question by the ending, which goes for the not-all-that-shocking twist of no time having passed during Beast's seemingly-weeks long tryst with Synthia, leaving it open ended whether anything that happened actually happened and thus negating any possible ramifications of the story on the character. Of course, these events did happen, as the final panels assert almost immediately after teasing the idea of it all being a dream, but even then, so what? Any ramifications of the events are unclear; does getting sexually hoodwinked by a crystal alien dressed up like a woman make Beast feel better about his image? Does he acquire a new feeling of heroic purpose via his efforts to help Synthia defeat the oh-so-cleverly-named Dark One? Does he feel at all used by her, or did he just enjoy the sex? The answers put forth by the issue seems to be ">shrug<." The story, specifically its ending, in an effort to appear deep and adult, never bothers to addresses any of those questions. It doesn't care about them, so its hard for readers to care about them.

The highlight of the issue is probably Jackson Guice's art, looking much more polished and dynamic than his earlier work on the series (or even his more recent work on Fantastic Four Annual #23), probably thanks, in part, to the higher quality paper, though his Beast remains off-model, both in terms of previous depictions, and page-to-page continuity within the story. But nice though the Guice art may be, it still isn't enough to elevate the mundane story the way the work of an Alan Davis or Art Adams could. Ultimately, it's hard to fathom why anyone heard this pitch (or requested it) and said, "That sounds awesome! And let's make that a prestige format one-shot!". Certainly, little about it lives up to that format.

Next Issue
Next week, Rogue returns in Uncanny X-Men #269, Cable battles Wolverine in New Mutants #94, and X-Factor gets the "quiet issue" treatment in X-Factor #59.