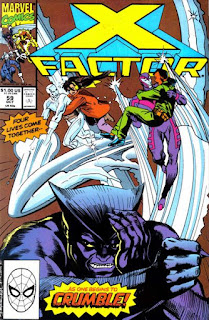 Plot
Archangel is brooding, perched atop a cable line for the Roosevelt Island tram, when he is interrupted by a group of reporters crammed into one of the cars. Two of the reporters fall out, prompting Archangel to sweep down and rescue them, but when they pepper him with questions about Charlotte, he drops them in the river. The whole thing is picked up by Trish Tilby and her cameraman, and Trish laments that while the reporters deserved it, the public will only see a mutant attacking two humans, and starts to come around to Hank's side of their argument. Archangel proceeds to Charlotte Jones apartment, where he meets her son and her mother-in-law before joining her for coffee. Inside Ship, the rest of X-Factor runs some tests on Christopher's force field, after which Bobby leaves for a date with Opal after helping Hank realize he owes Trish an apology. At the TV station, Trish laments her inability to cut the footage to present Archangel in a positive light to her boss and ex-husband, Paul. 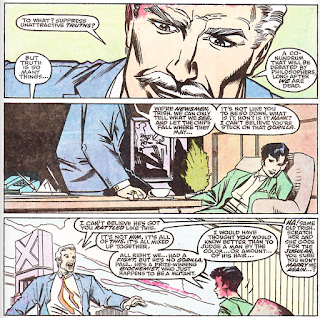 Paul proceeds to send her on special assignment to India. Just then, Hank arrives outside the window and spots them parting amicably. Believing she still has feelings for Paul and that she's better off with him than Hank, he leaves without saying anything. Later, Archangel flies Charlotte to work, and she tells him how her husband died, leading to her becoming a police officer. Hoping to lighten the mood, he then buzzes Iceman and Opal, racing past on an ice slide, and Iceman is shocked to see Archangel laughing. Later, Opal checks her mail, and finds an ominous letter, while Archangel lands before the reporters gathered at the base of Ship, his time with Charlotte giving him the confidence to embrace the more Warren Worthington elements of his personality. But as he proceeds to schmooze the press, a figure watches from the shadows, declaring he will soon destroy Archangel, as Archangel destroyed him! 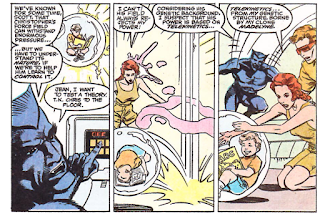 In the wake of their encounter with Ahab in "Days of Future Present", Scott and Jean agree to put Scott's botched proposal from issue #53 behind them and go back to the way things were. Jean also says that, next time, it may be her that proposes to Scott; in fact, when the pair do eventually marry, Jean is the one who pops the question. 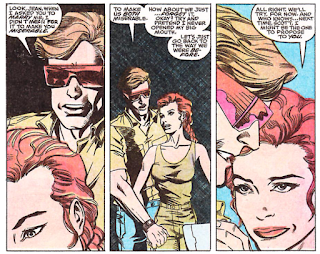 Hank and Bobby joke that about hearing wedding bells in reaction to Scott & Jean's re-found relationship; at the time, this was probably meant to tease the Scott/Jean wedding that incoming penciller/co-plotter Whilce Portacio had planned for issue #66. As detailed here, Tom DeFalco eventually stepped in and said that something like Scott and Jean getting married should happen in X-Men (especially since X-Factor was soon going to be rejoining that team), and thus put the wedding on hold, leading to Portacio (and Claremont) to rework that story into the one which ran in issues #65-68.

Opal receives a mysterious letter this issue, setting up the story in issues #63-64. 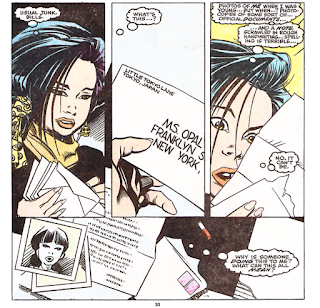 The final panel once again (somewhat obviously) teases Hodge as the villain behind "X-Tinction Agenda", though the next issue box humorously calls it the "X-Termination Agenda" by mistake (perhaps an indication of just how thrown together the crossover actually was).

The Chronology Corner
"Days of Future Present" occurs between last issue and this one.

A Work in Progress
This issue reveals a lot about Charlotte Jones, including the fact that her son Timmy was crippled in a gang attack that also killed her police officer husband, and that event led her to quit being a nurse and become a cop instead. 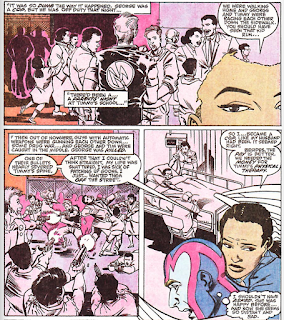 Archangel notes that the memories of Charlotte's he acquired last issue are fading.

By the end of the issue, he's made peace with who he is, and greets reporters while channeling his old Warren Worthington III charm. 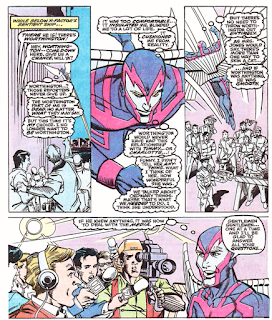 The Grim 'n' Gritty 90s
The flat-topped Timmy cries out "Kawabunga [sic]" at the sight of Archangel. 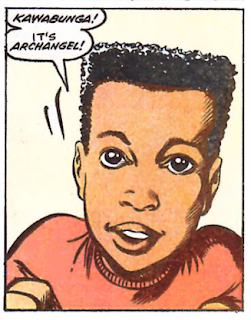 Young Love
Beast decides he owes Trish an apology for his recent behavior, but when he goes to her office, he observes her with her ex-husband and boss, jumps to conclusions, and runs off without saying anything. 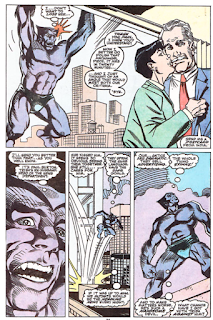 As Archangel flies Charlotte to work, he buzzes Opal and Iceman. 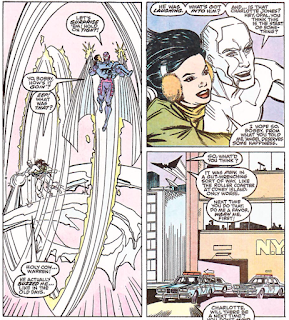 Teebore's Take
Though there's no official storyline or title to connect them, this issue feels very much like a bookend to issue #51, and in the same way that issue, in retrospect, reads like the start of a new era (albeit a brief and less-than-cohesive one), this one reads like the finale to that same era. Both heavily feature Warren trying to deal with the circumstances of his life as Archangel following a protracted absence from the team during which he wasn't entirely himself (his drugged state as a captive during "Judgment War", his time hallucinating and then hoodwinked by Crimson), and where issue #51 ended with him flying away from reporters in a rage, this one ends with him embracing the media and the part of himself that was once good at dealing with them, an indication of just how far he's come over the course of the last nine issues.

Additionally, just as issue #51 laid the groundwork for the expansion of the supporting cast with the introductions of Charlotte Jones and Opal Tanaka, this issue shows just how integral to the series they've become, with the pair (and their respective X-Factor beaus) almost double dating at one point, with the background info on Charlotte presented here helping her become a more fully realized character, while an Opal-centric plot gets teased. Even Scott & Jean, so often the focal point of the series but relegated, for the most part, to the background during this era, complete an arc of sorts, coming to terms with Scott's ill-timed proposal in issue #53 and agreeing to more or less go back to the way things were (left out of all this romance, meanwhile, is poor Beast, whose relationship with Trish is on the rocks and threatening to get rockier. It's a shame that Prisoner of Love seems so disconnected from narrative of this series, as with a little fine-tuning, it would make for a great companion piece to what he's going through in this series at the moment).

Adding to the end-of-the-era feel of this issue is the knowledge that, after the upcoming crossover (which, while centered on a chiefly-X-Factor villain, takes the team far afield of its usual trappings for three issues), Whilce Portacio comes aboard, giving the team a new look and bringing more narrative cohesion (relative to this run of issues), at least for a brief time. The characterization and new characters developed during this run won't be thrown out the window, but the book post-"X-Tinction Agenda" is very different from this one (and before long, it will be an altogether different book entirely). But even without the knowledge of what's to come, this issue still serves as an effective conclusion to this weird little stretch of issues, filled with seemingly-random artists and loose form storylines, retro inter-connectivity between X-titles and a focus on the supporting cast. It's not the flashiest or most consistent of runs, but it has its charms and mostly succeeds at being entertaining, and this issue brings it to a satisfying close.

Next Issue
Next week, we look at the original set of Marvel Universe trading cards, in the first installment of "Unstacking the Deck".