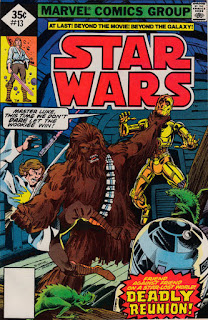 In a Nutshell
The Star Warriors get caught in the middle of a war on Drexel.

Plot
On Drexel, Artoo repairs a hydra-skimmer to prove his value to Governor Quarg, after which Luke is required to take the skimmer for a test flight to check his work. During the flight, he's attacked by the Master Machinesmith whose job Artoo is taking, but Luke manages to fight him off and complete the test, earning Luke and the droids a place with Quarg's men. Later, Quarg tells Luke of how he and his men came to be on Drexel, then shows him the sonic jammers he used to crash Luke's ship, just as another vessel appears in orbit around the planet: Crimson Jack's Star Destroyer. Quarg turns the jammers on the ship, but its massive size helps it resist. The attack, however, creates an opportunity for Han, Leia and Chewbacca to reach the Millennium Falcon and escape from Jack. 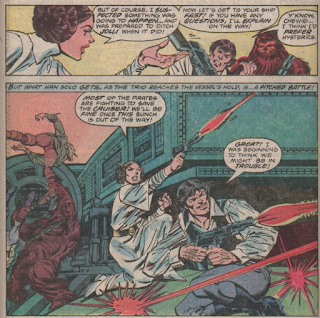 On Drexel, Quarg is informed that the Dragon Lords are mounting an attack, and he orders Luke to command a gunship, telling him if he doesn't fight well, the droids will be destroyed. Luke flies out with the rest of Quarg's forces just as the Falcon lands nearby. Luke spots a skimmer attacking the ship, and destroys it in turn, but when Luke reaches the Falcon, an enraged Chewbacca, seeing only the pilot of a craft just like the one that tried to destroy them, attacks Luke. Just then, the Falcon takes another hit, and Luke is knocked out. When he wakes up, he finds himself in a cell along with Chewbacca, Artoo and Threepio, waiting for a death sentence to be carried out.

Firsts and Other Notables
This issue lays out the background for the situation on Drexel: Governor Quarg's father was once the governor of the system, and used sonic jammers to destroy ships and sell off the parts for scrap, but eventually the Old Republic sent Jedi to put a stop to him, and his ships ended up crashing onto the planet. Later, the technicians that were part of his crew defected to become the Dragon Lords, using their sonic technology to control the creatures, creating the war that the Star Warriors now find themselves in the midst of.

There are a ton of references to Star Wars in this issue: Luke mentions Beggars Canyon, Artoo and Threepio get an oil bath (albeit one made of fish oil), Leia takes charge of her own rescue from Han, and the deaths of both Ben Kenobi and Luke's aunt and uncle are mentioned.

X-Men artist John Byrne provides the cover to this issue.

A Work in Progress
Quarg's tale of his father's past includes a run-in with a Jedi Knight in the days of the Old Republic.

It's also revealed why Luke's ship crashed on the planet, as it was brought down by the sonic wrecking equipment Quarg has adapted from his father's technology. 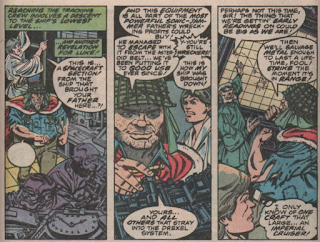 It's established that the Falcon can float.

Um, Actually
Luke is colored with brown hair on the cover.

Threepio refers to Artoo and himself as both robots and droids.

Young Love
Leia's suggests to Jolli that old chestnut about how hating someone might just be cover for loving them, though in hindsight, this advice could apply to Leia as well when it comes to Han. 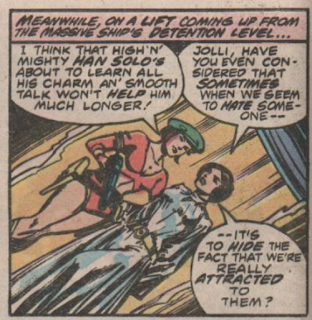 Teebore's Take
Another issue split between Luke and the droids on Drexel and Han, Leia & Chewie aboard Crimson Jack's ship, this issue does inch everyone closer to a reunion (and, thankfully, gets half the group free of Jack's clutches, for now), but for the most part, this is the exposition issue, the one which provides the context of the mysterious world on which the heroes find themselves and the conflict in which they've become embroiled. Thankfully, Goodwin & Infantino are old pros at this stuff, and manage to weave in enough action to keep the exposition from dragging things down. Luke remains the standout character, striking the right balance between effectiveness and aw-shucks naivete, but Leia also gets a chance to do something other than practice dubious gender politics, blasting her, Han and Chewie's way off Jack's ship in a scene reminiscent of her taking charge of her own rescue in A New Hope. The issue-ending cliffhanger involving a mad Chewbacca attacking Luke fails to rise above the fact that it's a flimsy story beat put in due to the genre conventions of the time, but otherwise, this issue does an effective job of raising the stakes and moving the plot along, even if it pushes off a proper reunion between the main characters for another issue.

Next Issue
Reunion on Drexel!