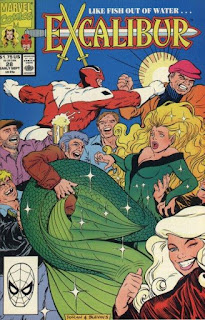 "The Night They Tore Down the Gilded Lady"
Late September 1990

In a Nutshell
Captain Britain & Meggan find their night out interrupted by a pair of con artists.

Plot
Brian and Meggan are excited to have snuck out of the lighthouse for a date night. Together, they fly to the Gilded Lady, a pub in London which Brian frequented during his college days, and which is slated to be torn down the next day. They get a table and order drinks, though the alcoholic Brian gets some flak for ordering lemonade instead of beer. However, Meggan draw attention away from him by mimicking his form and posing as his twin, matching the crowd drink for drink. Just then a woman named Cooter and her cousin Bash enter the bar. They set about fleecing the patrons, using Cooter's power to trick them into thinking they're buying gold on the cheap, when in fact they're just buying ordinary pebbles. Meggan and Brian, however, are unaffected by Cooter's power, and their attempts to stop the pair lead to a barfight that destroys the Gilded Lady. Eventually, the police arrive, and Brian & Meggan turn Cooter & Bash over to them before flying off. But Cooter uses her power to trick the police into seeing the bar's rubble as gold, and she & Bash drive off into the night, contemplating a trip to America.

Firsts and Other Notables
This is another fill-in/inventory issue, written by former X-Men inker Terry Austin, with pencils from Colleen Doran (who drew the never-released second Fallen Angels miniseries) and inks by former New Mutants penciler Bret Blevins.

The villains of the story are the unfortunately-named Cooter, a woman with the ability to creature illusions, and her companion Bash, a typical super-strong bruiser type. I believe this issue marks their first and only appearances. 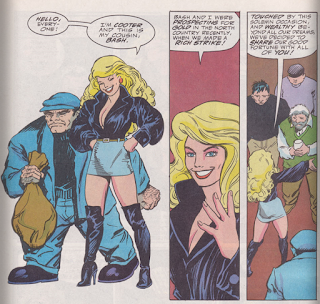 A Work in Progress
Brian begs off drinking while at the Gilded Lilly, citing his alcoholism. While Brian's drinking problem has been mentioned before in the series, I don't remember ever being told or shown that he's acknowledged the problem to the point of admitting he's an alcoholic and refusing to drink as a result. 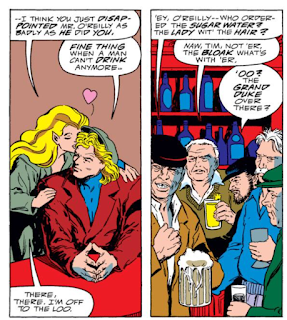 Cooter's power involves playing on people's greed to make them see false images, though people who are exceedingly honest or that lack imagination are immune. Meggan is said to be the former, while Brian the latter. 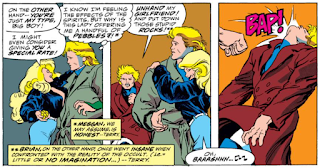 Young Love
When Cooter focuses her power on Meggan, she sees Brian as Nightcrawler. 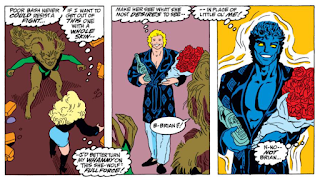 Teebore's Take
Yet another fill-in issue/inventory story, but as Excalibur fill-ins go, this isn't too bad. It's entirely inconsequential, doing some light character work with Captain Britain and Meggan, but otherwise not tying in with the series' larger narrative arcs (or any other characters) in any way. But the art from Colleen Doran & Bret Blevins is  a standout element, fun, lighthearted and suitable for the kind of story Terry Austin is telling (frankly, given the general tone of Excalibur relative to the rest of the X-books, Doran & Blevins would make pretty good regular artists for the series). But most importantly, this issue doesn't try to do too much by showcasing a significant plot development that is better left to the regular creative team or creating wonky continuity problems by featuring characters and settings that conflict with one another. If that sounds like damning with faint praise, it probably is, but at this point in the book's run, a character-driven fill-in issue with strong, effective art that tells its story but doesn't cause any other narrative problems is downright refreshing and, somewhat sadly, accounts for one of the series' better offerings of late.