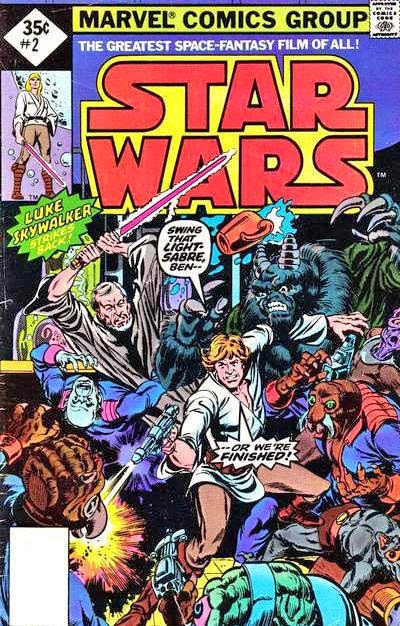 In a Nutshell
Luke meets Ben Kenobi, Han Solo and Chewbacca, then blasts off Tatooine.

Plot
Luke is rescued from the Sand People by Ben Kenobi, who admits to having once been Obi-Wan Kenobi. He takes Luke and the droids to his home, where Artoo plays Princess Leia's message, urging Ben to deliver the droid to Alderaan for the sake of the Rebel Alliance. Ben proceeds to tell Luke of the Force and the real history of his father, a Jedi Knight. He gives Luke his father's lightsaber, and tells him he will learn the ways of the Force and come with him to Alderaan, but Luke balks, insisting it's all too far away. Meanwhile, aboard the Death Star, Darth Vader tortures Princess Leia for the location of the Rebel's hidden base. On Tatooine, Luke and Ben come across the Jawas who sold the droids to Luke's uncle, killed by Stormtroopers. Realizing they're after Artoo, Luke races home to find it smoldering, his aunt and uncle dead. Returning to Ben, he declares he wants to become a Jedi. Meanwhile, Governor Tarkin orders the Death Star to set course for Alderaan. 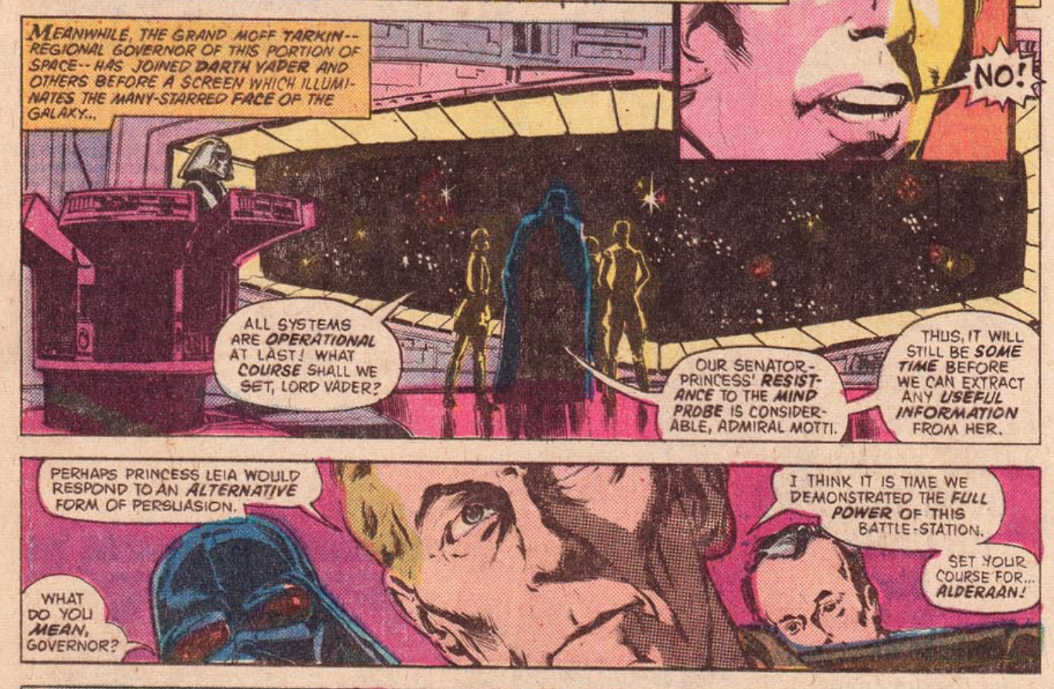 On Tatooine, Luke, Ben and the droids arrive in Mos Eisley, hoping to find transport to Alderaan. Inside a cantina, Luke runs afoul of two toughs, forcing Ben to use his own lightsaber in defense of the boy. Then they meet Han Solo and Chewbacca, a pair of smugglers, and book passage aboard their ship, the Millennium Falcon. After they leave, Han is accosted by a bounty hunter working for Jabba, but he shoots the hunter. As Luke and Ben sell Luke's landspeeder, Han is confronted by Jabba himself. Han promises to pay him back what he owes, plus a little extra, with the money he's making on his next job. Jabba lets him go, but promises a huge bounty on his head if he disappoints him again. Later, Luke, Ben and the droids board the Falcon just as the Stormtroopers catch up to them. Han and Chewbacca blast off the planet, only to find a trio of Star Destroyers waiting. Just as the ships close in, however, the Falcon jumps to lightspeed, and safety.

Firsts and Other Notables
A bunch more significant characters make their first comic appearance in this issue, including Han Solo, a more ape-like Chewbacca, Obi-Wan Kenobi, and blaster-fodder bounty hunter Greedo (who is unnamed in the comic). 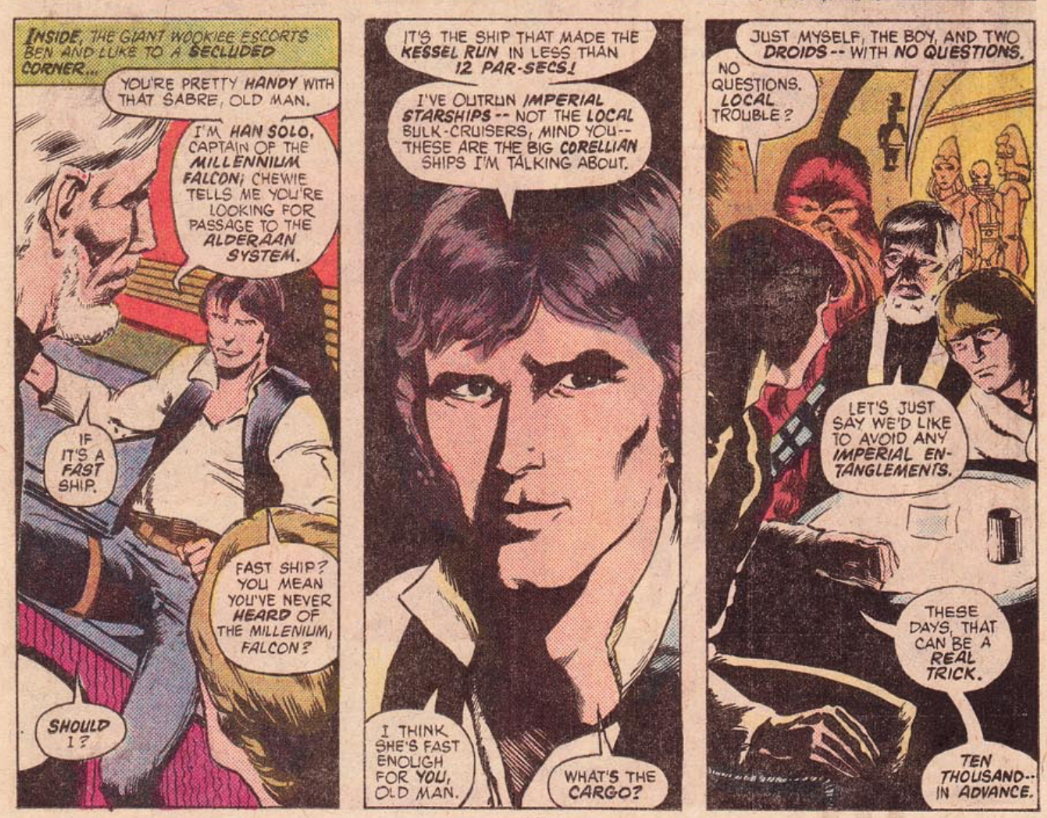 Jabba the Hutt also makes his first appearance in the comics, the confrontation between him and Han prior to the Millennium Falcon's blast-off from Tatooine that was famously cut from the film then re-added to the New Hope special edition having not been excised yet from the draft Thomas and Chaykin were given. Jabba, of course, looks nothing like either the stand-in actor seen in stills from the original cut scene nor the Jabba who eventually appears in Return of the Jedi and the special edition scene. 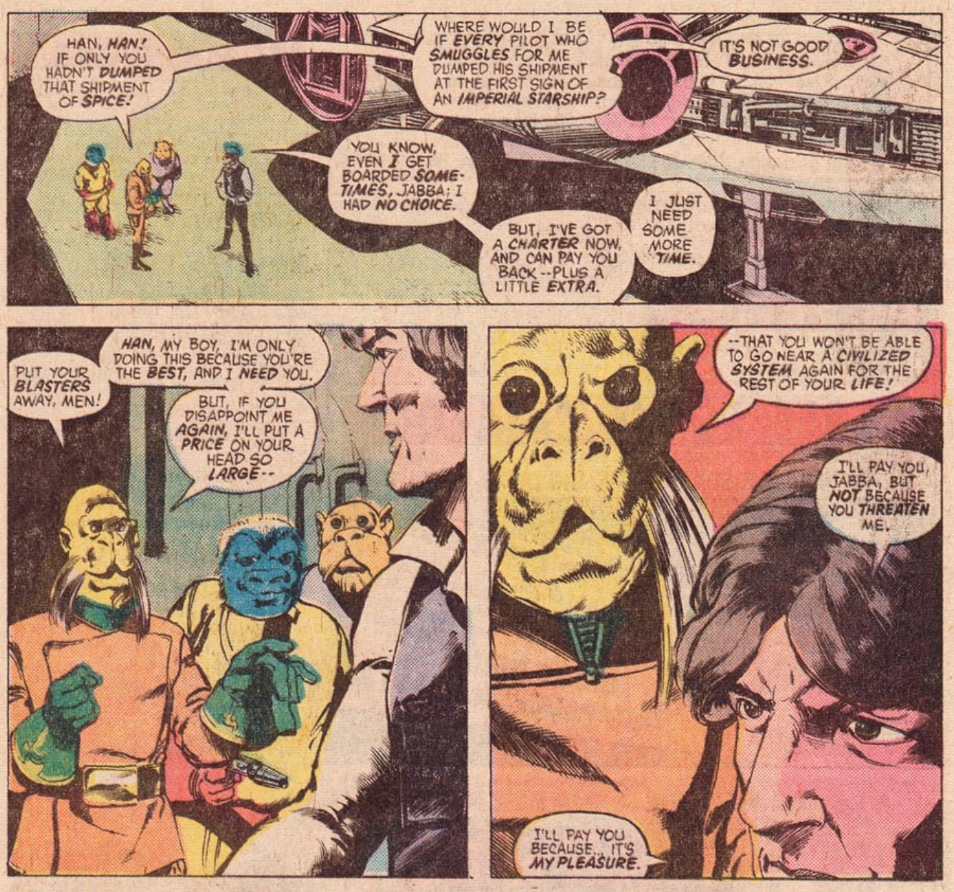 Steve Leialoha, longtime artist on Fables and, as readers of my X-aminations posts know, a regular, albeit infrequent, contributor to various X-books through the years, comes aboard as the new series inker, with Chaykin providing only layouts due to getting crunched by deadlines.

Tom Orzechchowski, who had a lengthy run as the letterer on Uncanny X-Men, does the lettering for this issue.

A Work in Progress
The cover blurb on this issue has a nice bit of coincidental foreshadowing, given the title of the next film in the series.

Lightsaber is spelled "lightsabre" throughout this issue, while Thomas has stopped putting "cosmic" before "the Force" (but he's still sticking quotes around it).

The Chaykin/Leialoha Chewbacca is much more ape-like than his movie counterpart. 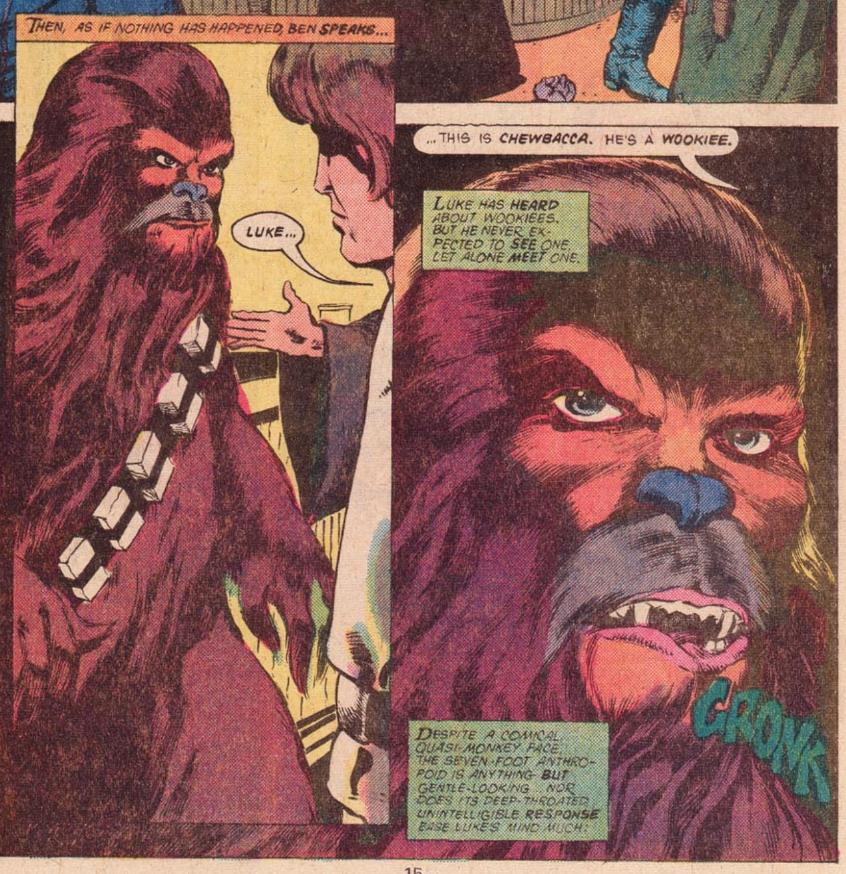 Um, Actually
Leia says that her father is Bail Antilles, not Organa. Bail Antilles, a different character entirely, is mentioned in Phantom Menace as one of the candidates to replace Chancellor Valorum, because apparently "Antilles" is the Star Wars galaxy's equivalent of "Smith".

Uncle Owen believes that Luke's father should have stayed on Tatooine, which, I suppose, is technically true, even in light of the prequels. 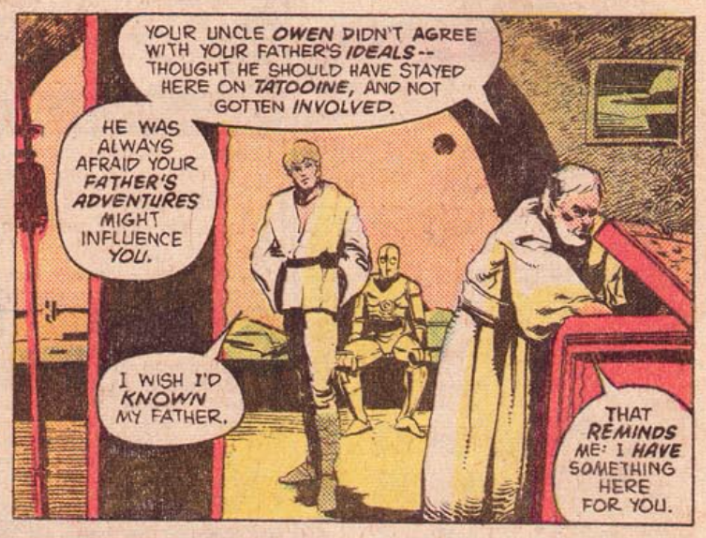 None of the aliens appearing in the cantina match the ones which appear in the film, not surprisingly, given that neither Thomas nor Chaykin had seen any footage of the film when creating this issue, and thus were left to their own devices to populate the scene. 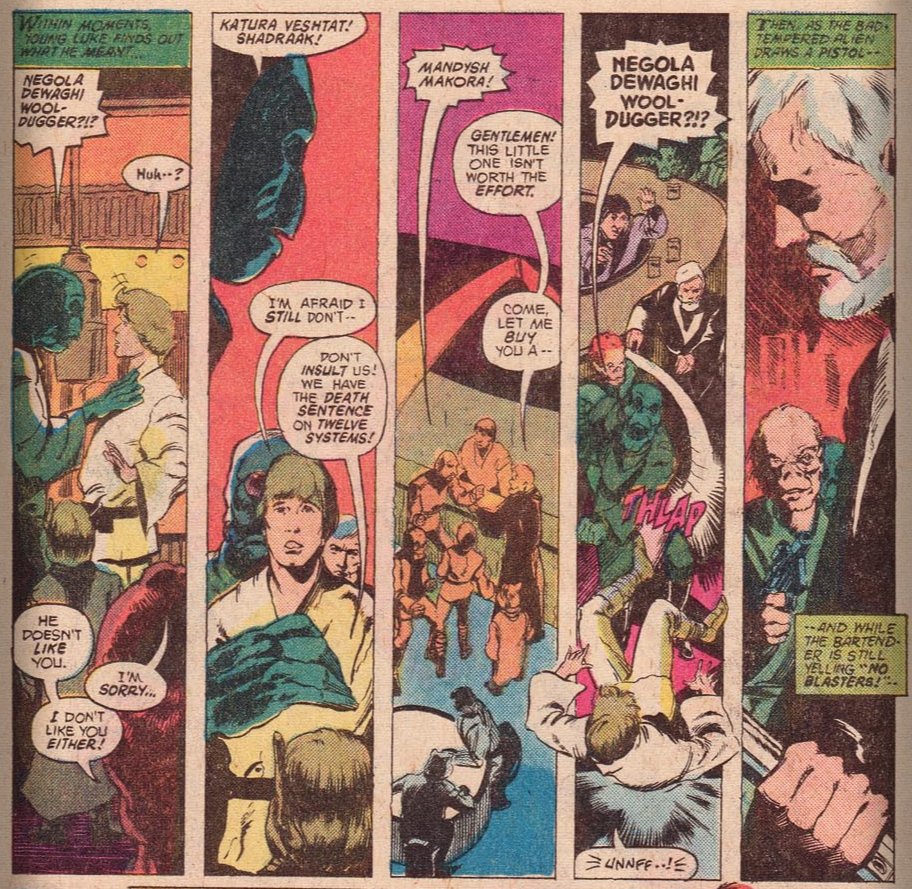 Similarly, the Imperial spy trailing Luke and Ben in Mos Eisley is just a cloaked figure, and not the long-snouted alien of the movie.

During their infamous conversation in the cantina, Han and Greedo speak English (or Basic, if you prefer), as opposed to Basic/Huttese. And, to the unending joy of a certain angry segment of Star Wars fandom, Han does indeed shoot first. 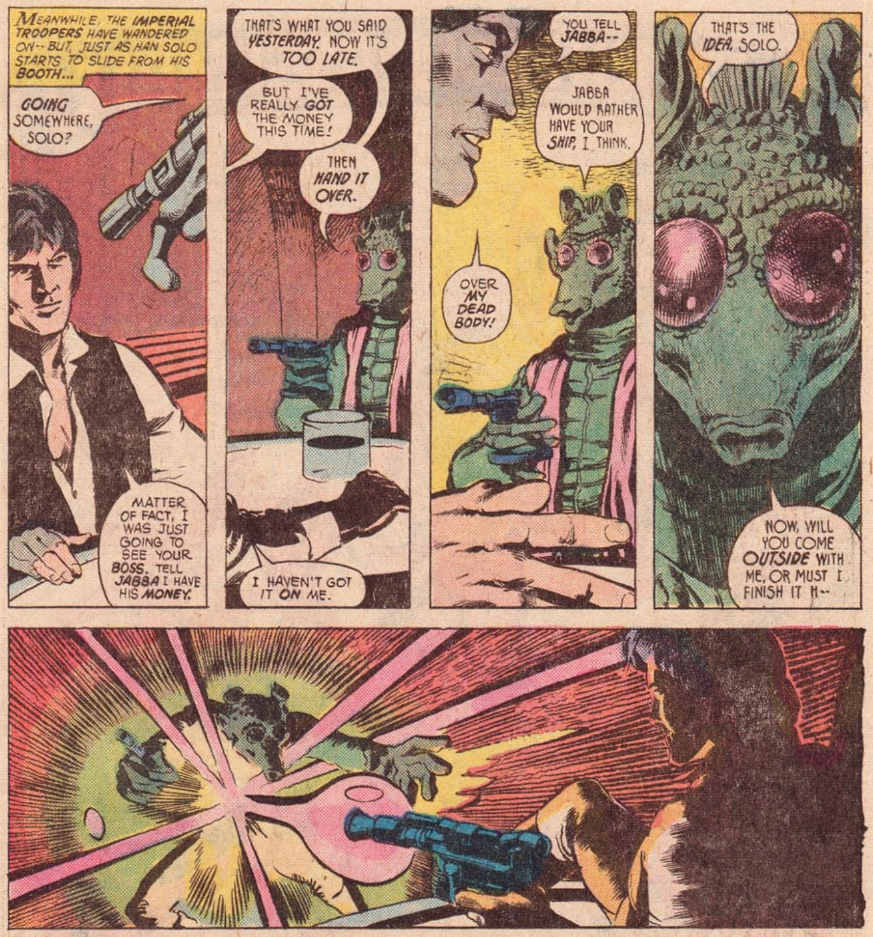 Teebore's Take
I've always gotten a kick out of the cover to this issue. It's so deliciously comic book-y in the way it casts Luke in the role of a traditional action hero, and is thus rather dissonant tonally with the actual story that unfolds beneath the cover. It's easy to imagine how any comic book artist, told that Luke is the main character of the story and that the central action set piece of of the issue is a bar fight involving a laser sword, would churn out a cover like this (especially back in the 70s, when there was more of an onus on covers to sell an issue than to accurately represent the contents of the story), yet it's totally at odds with where Luke's at as a character at this point in the story, still a farm boy taking his first bumbling steps into a larger world, needing to be saved by Ben after quickly getting in over his head. Even in the film, Luke doesn't really start acting with much agency until he gets aboard the Death Star, and even by the end of the movie, he's still not the cocksure action hero of this cover. Yet there's still some charm to it, inaccurate it may be, as both a representation of this time in comic history and a look at the process of adaptation.

Next Issue
The Death Star does its thing.