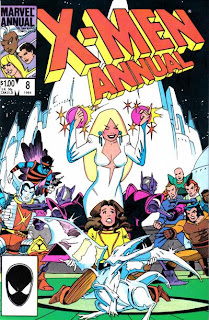 In a Nutshell
Illyana tells a sci-fi story starring Kitty and Lockheed.

Plot
The X-Men and New Mutants are telling stories around a campfire. As the hour grows late, Illyana, hoping to cheer up Kitty, offers one last story: when the starship Chicago is attacked by the evil White Queen, young Kitty is captured. Using her nascent phasing power, she escapes. Just then, the White Queen's ship is boarded by a group of pirates led by Lockheed. The White Queen kills Kitty's parents, but Lockheed, Wolverine and Nightcrawler rescue the girl, and offer her a place on their ship. Years pass, and Kitty grows up a member of Lockheed's crew. One day, they are invited to help celebrate the jubilee of Charles Xavier. Landing at the imperial palace, they meet Xavier and Lilandra, rulers of the Shi'ar Empire, and Kitty notices a cute imperial guardsmen named Peter Rasputin. As the party begins, Lockheed receives a strange summons. Wolverine follows him, and watches as a group of dragons ambushes and disappears with Lockheed. Just then, the White Queen appears and captures Wolverine. She sends Kitty a message, making her believe she's killed Lockheed, and telling her to turn herself over to the White Queen or she'll destroy Wolverine.

Enraged, Kitty and Nightcrawler, joined by Peter, track an extra-dimensional energy signature found at the site of Lockheed's kidnapping, but they are unknowingly followed by the White Queen. The trail leads into a black hole, and Kitty must convince a reluctant Storm, once the best pilot in the galaxy, to fly their ship into it. Lockheed's crew emerges from the black hole to discover a crystal planet, along with Lockheed, alive, surrounded by female dragons. Just then, the White Queen attacks. The crew fights back as Kitty and Lockheed phase aboard the White Queen's vessel, freeing Wolverine. They escape to the planet, then destroy the White Queen's ship. Kitty and the White Queen engage in a battle of will power, with Kitty emerging the victor, leaving the White Queen to the mercy of the dragons. Lockheed is offered a place on the planet repopulating his species, and the rest of his crew depart on their repaired ship. Kitty is sad over Lockheed's absence until it's revealed that he's decided to remain with his crew. As Illyana finishes her story, Kitty and Colossus are moved to discuss their break-up. They agree to try and remain friends, and Kitty thanks her best friend for the story.

Firsts and Other Notables
This issue serves as a sequel of sorts to "Kitty's Fairy Tale", from Uncanny X-Men #153, with Illyana returning the favor to Kitty and telling her own story featuring Kitty as a swashbuckling adventurer. This time, the fantasy trappings of the first story are replaced by sci-fi ones, with Kitty and the other X-Men cast as space pirates akin to the Starjammers.

Storm, after being derailed in her first attempt to leave the team and go to Africa for a time, resolves to do so once more. Issue #193 will reveal that she was more successful in her second attempt; as a result, she is considered to have left the X-Men as of this issue.

As a result of Illyana's story, Kitty and Colossus are able to talk about their break-up (Kitty learns Zsaji's name in the process), come to speaking terms with one another, and agree to try and remain friends. 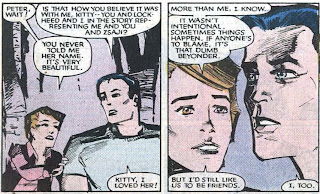 At one point in the story, Kitty tries on a series of outfits while aboard Lockheed's ship; a footnote says the  designs are all courtesy of comic artist and writer Trina Robbins, who was one of the first underground comics artists of the 60s (she co-created Vampirella). I have no idea how she ended up contributing a handful of fashion designs to a random X-Men annual. 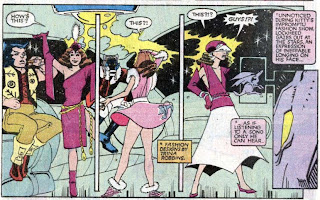 In a 100% unintentional bit of foreshadowing, the White Queen in Illyana's story can transform things into crystal, which is reminiscent of her secondary mutation to transform herself into diamond, which will be established during Grant Morrison's run in the 2000s.

The Chronology Corner
This issue was on sale at the same time as Uncanny X-Men #188 and New Mutants #23, but the events depicted are considered to occur during issue #192, in the gap of time before the attack on Xavier at the end of that issue.

A Work in Progress
As the issue opens, Kitty and Wolverine's adventure in Japan is referenced, as are Storm's efforts to come to terms with the lose of her powers and the state of Kitty and Colossus' relationship (now that they're hanging out together for the first time since they broke up).

Stevie Hunter pops up, attending the cookout with the X-Men and New Mutants.

Illyana cites her adventure in New Mutants #21 as an inspiration for her story, though we (the readers) still haven't learned the details of that adventure.

The characters in Illyana's story compare some mountains to the Himalayas, which seems an odd point of reference for star-faring characters who aren't from Earth. 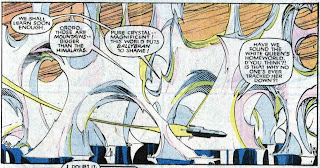 Wolverine abbreivates the word "polite" as "p'lite" in his thoughts, the first (and I believe, hopefully, the only) time any has ever abbreviated the word in that manner, ever.

Young Love
Kitty is attracted to Colossus when she first meets him on Xavier's planet.

The end of the Illyana's story (and the issue itself) suggests a romantic relationship between Lockheed and Kitty, which is...yeah. 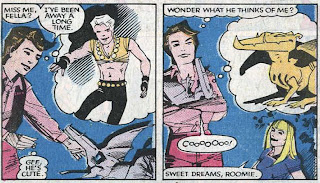 Teebore's Take
I've gone on record as not being the world's biggest "Kitty's Fairy Tale" fan, but I think most of us can agree that the law of diminishing returns is already setting in with this annual. Where "Kitty's Fairy Tale" was a relatively fast-paced story set within the confines of a single issue, this one is ponderous and stretched out to fill a double-sized annual. "Kitty's Fairy Tale" also succeeded in part by presenting various X-Men in clever ways that played up a specific aspect of their personality (Nightcrawler as a goofy horndog, Wolverine as a monosyllabic brute), whereas this story does little to reinterpret or tweak the characters: Space Pirate Wolverine, Nightcrawler and Kitty are pretty much exactly the same as their regular counterparts, and the biggest twist this issue puts on the characters is the suggestion of a creepy romantic attraction between Kitty and Lockheed (who physically is no different in the story than ever).

"Kitty's Fairy Tale" also offered up a "happy ending" version of "The Dark Phoenix Saga", whereas this story...kinda represents Kitty's history with the White Queen, and tries to speak to both Storm's power lose and the Kitty/Colossus break-up, albeit in the most direct and obvious way possible. Finally, while the art from Steve Leialoha is serviceable, and even pretty good in places (there's a Mike Mignola-esque quality to it that serves the story well), it lacks the fun, whimsical energy that Dave Cockrum brought to his story, an energy that really helped elevate that story. So in the end, the trend of annuals featuring dragged out, largely inconsequential stories unfortunately continues.

Next Issue
Tomorrow, we look at the Beauty and the Beast limited series, and next week tackle a pair of X-Men guest appearances in one post, Alpha Flight #17 and Dazzler #38.
Newer Post Older Post Home
Posted by Austin Gorton at 10:30 AM