In a Nutshell
The X-Babies enlist Kitty's help saving them from Mojo.

Plot
On Mojoworld, Ricochet Rita and the X-Babies run from Mojo's troops. They're chased into a massive building housing the entrance to the Forbidden Zone, and the ensuing fight collapses the structure, seemingly killing them, much to Mojo's dismay. However, Major Domo realizes the X-Babies have merely been dimensionally displaced, and Mojo tasks the Agent with retrieving them and forcibly signing them to long-term contracts. Meanwhile, Kitty Pryde is aboard a train bound for London, having attended a concert in Edinburgh, when the X-Babies suddenly appear. They introduce themselves and explain they've fled Mojoworld for Earth, but need Kitty's help finding Rita. Kitty realizes the best way to do that is to call on Excalibur, so they go to a local police station to call her teammates. However, Kitty discovers the phone lines are out, and when Psylocke signs a document offered by the officer on duty, the officer transforms into the Agent, absorbing Psylocke and adding her power to his own. Kitty and the X-Babies escape by stealing a car and head for London, losing Havok to the Agent along the way. In London, the Agent manages to absorb  more of the X-Babies, until only Storm and Longshot are left with Kitty. 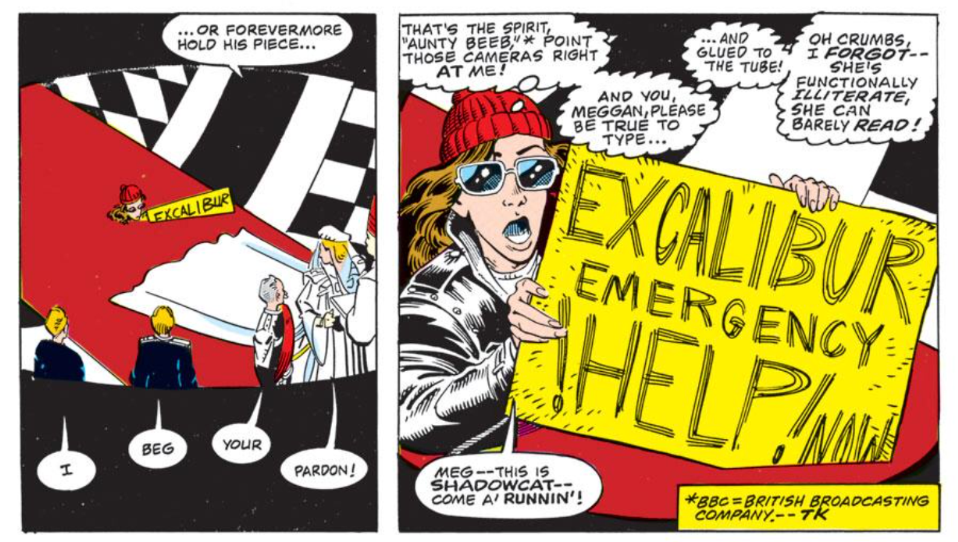 Still unable to reach Excalibur telepathically or by phone, Kitty, Storm and Longshot crash a televised royal wedding Kitty knows Meggan would be watching, hoping to attract Excalibur's attention. However, the priest turns out to be the Agent in disguise, and attacks the remaining X-Babies. Just then, Excalibur and WHO arrive and intervene. During the battle, Longshot and Storm manage to get a hold of the contracts the Agent tricked the other X-Babies into signing, and when Kitty phases their signatures off the documents, the Agent loses their powers, restoring the X-Babies. In the aftermath, the Agent is revealed to be a mind-controlled Rita in disguise,. Mojo appears, saying that while the X-Babies are free, Rita remains under his contract. The X-Babies agree to return and work for Mojo in exchange for Rita's freedom. However, Rita refuses to abandon the kids, and returns to Mojoworld with them. Captain Britain is dismayed that the villain seemingly won the day, but Kitty points out that while Mojo got the kids, he also got the kids, and on Mojoworld, an increasingly distraught Mojo is faced with a relentless stream of requests from the X-Babies.

Firsts and Other Notables
After debuting as their own entity (and not just the X-Men transformed into little kids) in X-Men Annual #12, the X-Babies return in this issue, picking up where they left off in that story (running from Mojo, with Ricochet Rita, Longshot's one-time love interest from his miniseries, in tow).

Judith Rassendyll, the Manhattanite-turned-royal whom Nightcrawler rescued from Arcade in Uncanny X-Men #204, thereby helping ease his existential crisis triggered by his encounter with the Beyonder, makes a brief appearance this issue, as she is the subject of the royal wedding Meggan is excited to watch and which Excalibur crashes at the climax of the story. Claremont originally had larger plans for the character, involving Nightcrawler's origins, which were ultimately scuttled, but this at least affords the character some closure after her earlier appearances. 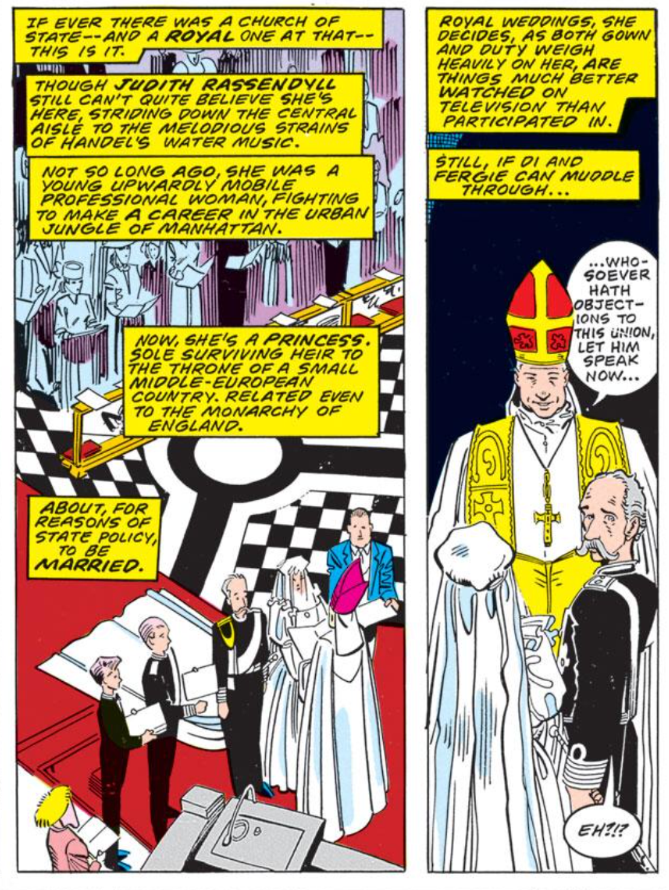 Kitty is revealed to be a fan of the band Cats Laughing, which is a real Minneapolis-based folk rock band from the late 80s and early 90s (they previously appeared as Murderworld simulacrums in issue #5). Amongst its members are best-selling sci-fi/fantasy authors Emma Bull and Steven Brust, both of whom I've had the pleasure to meet at 4th Street Fantasy, an annual sci-fi/fantasy writing conference in the Twin Cities. Presumably, Claremont is a fan. 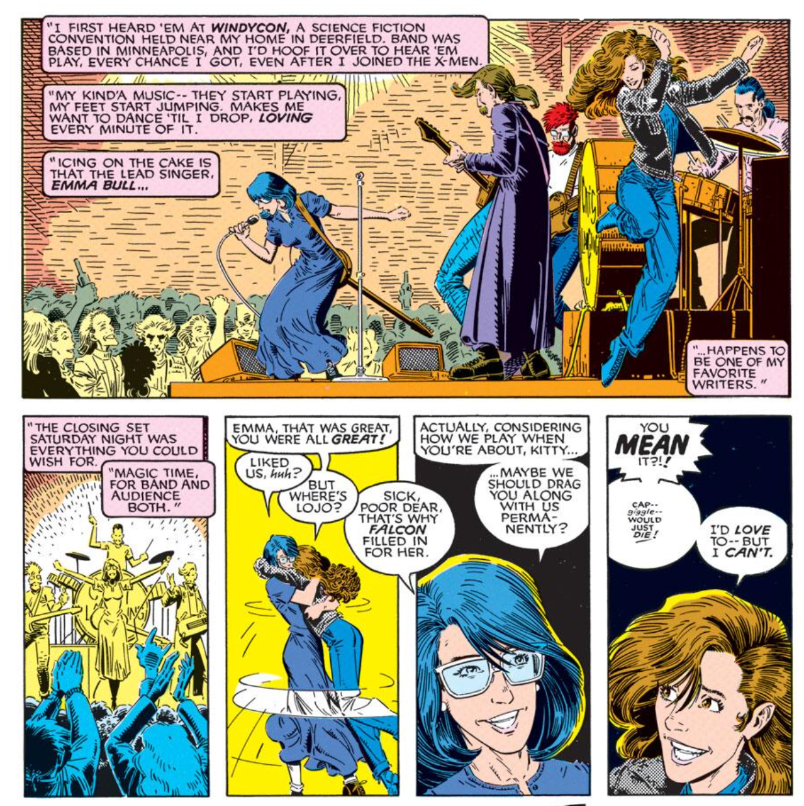 This issue is the first (and, I believe, only) appearance of Major Domo's counterpart, Minor Domo, as well as the Agent. 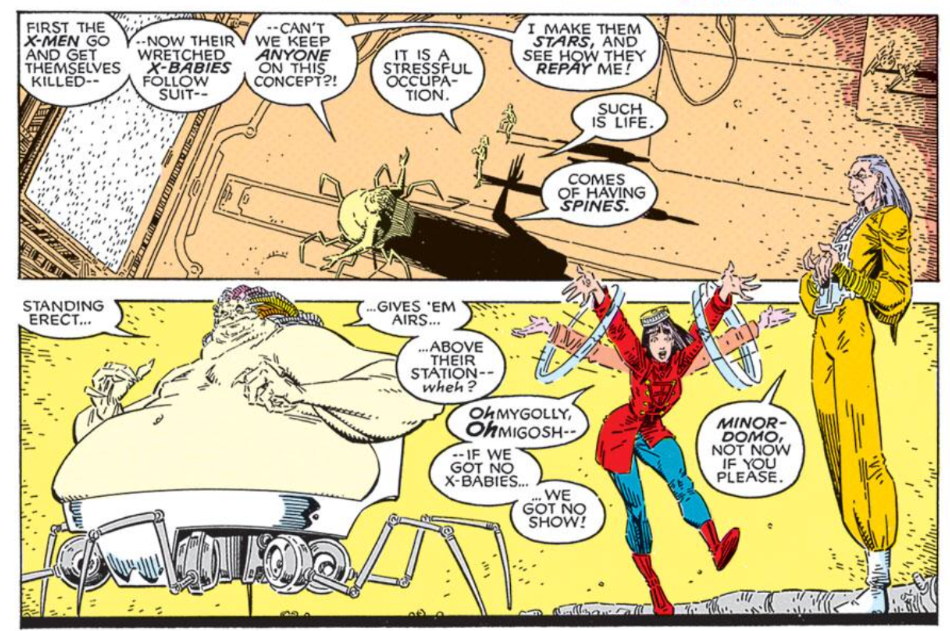 This is a square-bound, prestige format one-shot, similar to the Excalibur Special Edition that launched the series. It is essentially the series' annual for 1989, as for both Excalibur and Wolverine, the two prestige X-titles (in terms of format), Marvel released these kind of square-bound "bookshelf" issues annually for a number of years in lieu of the traditional extra-sized annuals, printed on regular paper, the other series received.

Art Adams provides the pencils for this issue, which is presumably why he didn't draw X-Men Annual #13.

The Chronology Corner
A footnote places this issue as occurring in and around the events of issues #10 and #11, though Captain Britain appears in it in full costume, despite his recent woes in that department (which Jason No-Prized away in a comment to an earlier Excalibur post as being the result of image inducer he's using to protect his image on national TV).

A Work in Progress
The troops chasing the X-Babies at the beginning of the story are carrying branding rods with a "tm" at the end, which is a nice touch.

Entering the Forbidden Zone, the X-Babies costumes change to reflect the current looks of their relative inspirations. 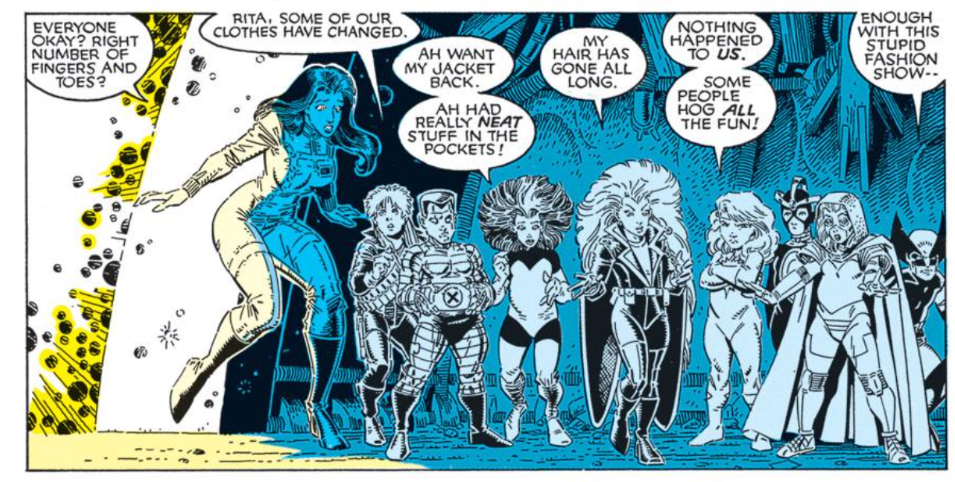 The train Kitty rides on this issue is the Highland Flyer, which is the same train that was sent to the alternate Nazi universe by Widget. We also see that Kitty has a Lila Cheney jacket.

She says she's figured out how to sleep like Wolverine. 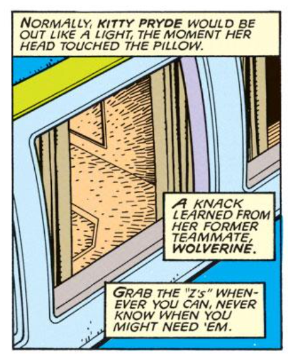 Which begs the question (which has been asked before), now that Kitty is phased unless she concentrates, how does she sleep? Ordinarily, we can ignore such a question, but this issue has her in bed, ready to sleep at the same time she's noting that she has to concentrate to stay solid, and later, shows her getting kicked off the train when she phases and the train races past her, which is presumably what would have happened once she falls asleep and loses concentration. 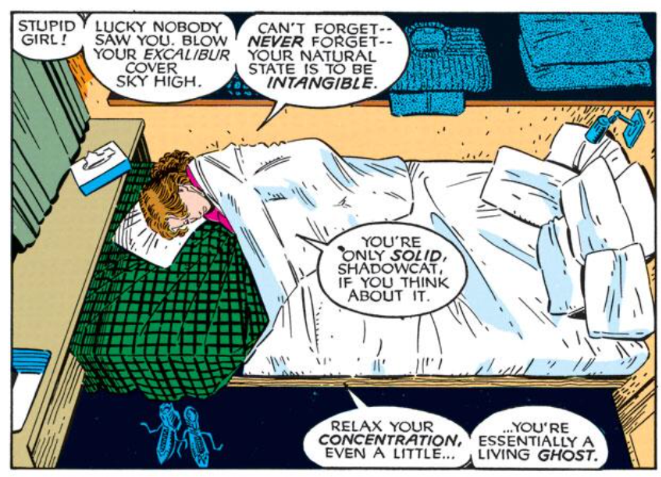 She also says she has to be careful when she sneezes for fear of blasting herself apart to the point that she can't pull herself back together. 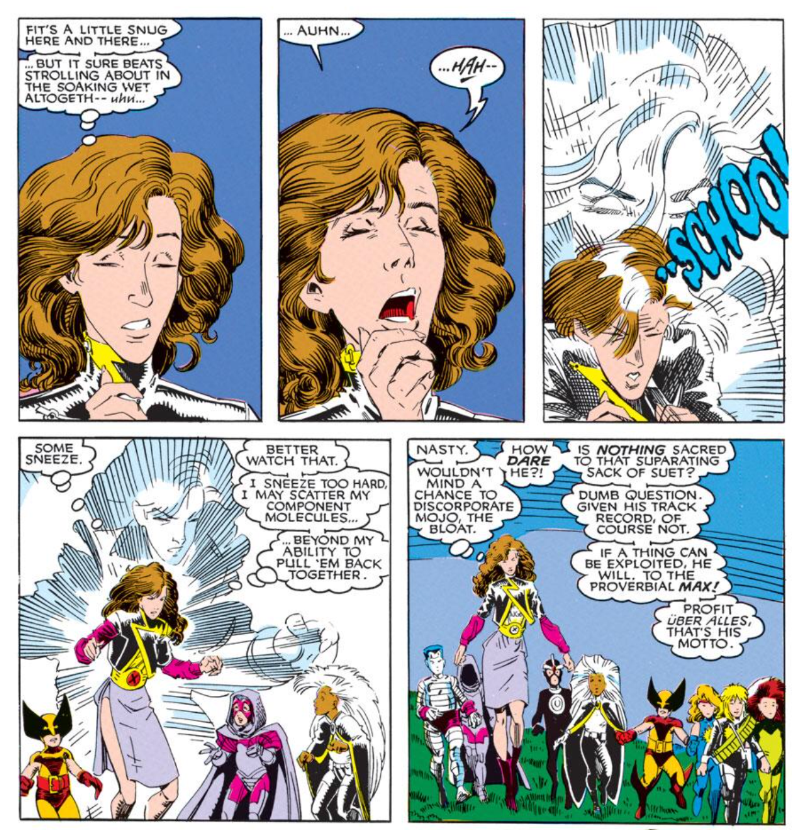 Hinted at in issue #10, it's revealed that Kitty has taken Widget back to the lighthouse, but is having a hard time repairing him.
Kitty has a hard time driving at night without her glasses, and mentions she's considered getting contacts but worries that sometime they may not phase with her. 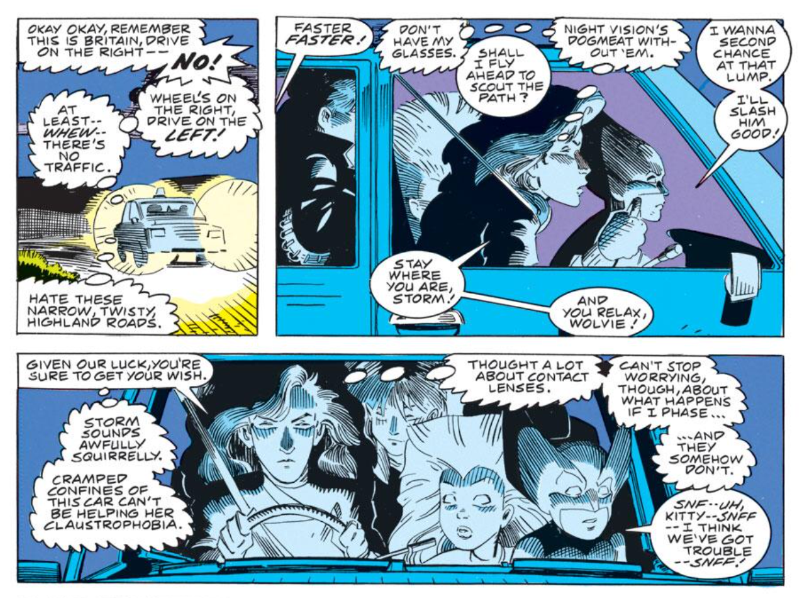 Kitty is able to phase the X-Babies signatures off the documents they signed. That's either an absolutely brilliant or stupid use of her power. I can't decide. 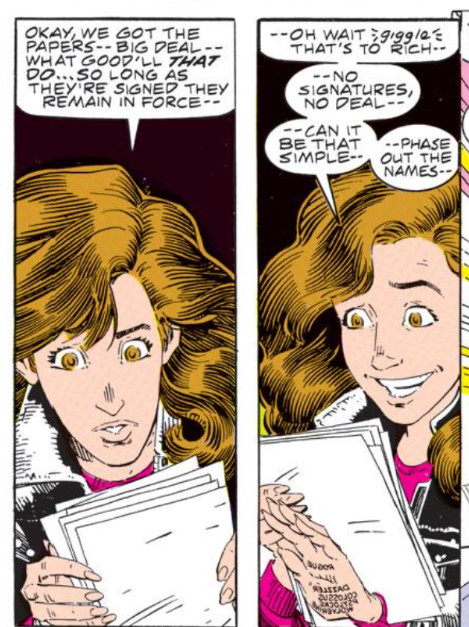 I Love the 80s
Kitty is reading an Anne Rice novel, The Mummy, which was published in 1989.

Somewhat unsettlingly, the still-underage Kitty once again spends a chunk of this issue running around in her underwear, though it's at least not presented as titillating and makes a relative amount of sense, as she is in bed when the X-Babies find her. 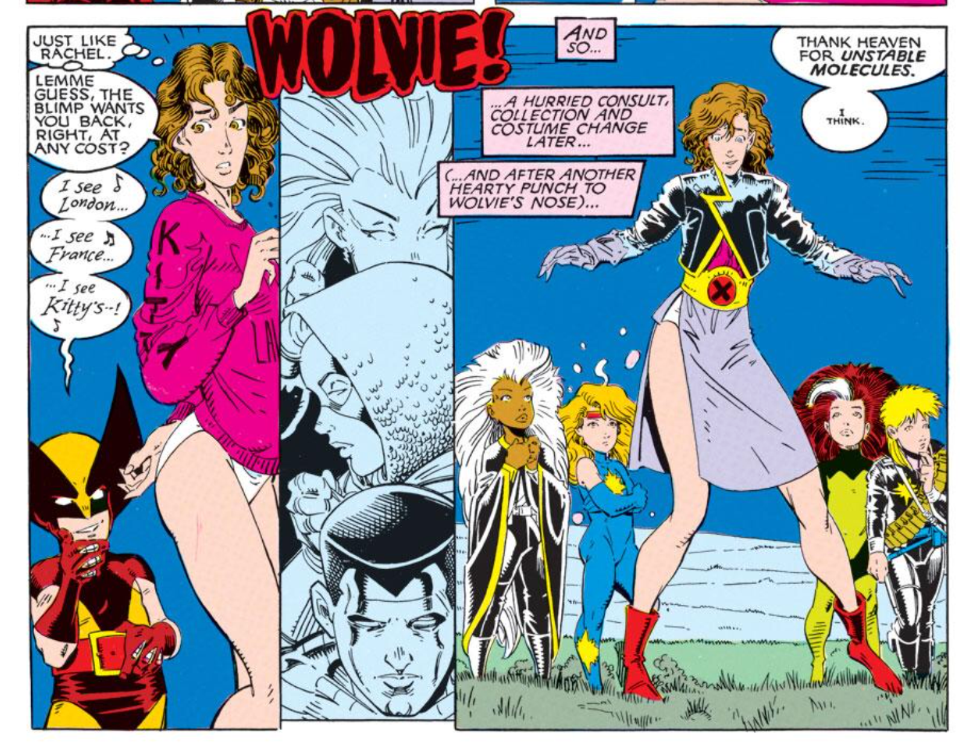 Kitty and the X-Babies commandeer a car filled with comic creators heading to a signing, including Chris Claremont, John Bolton, Ann Nocenti and Mike Lake. 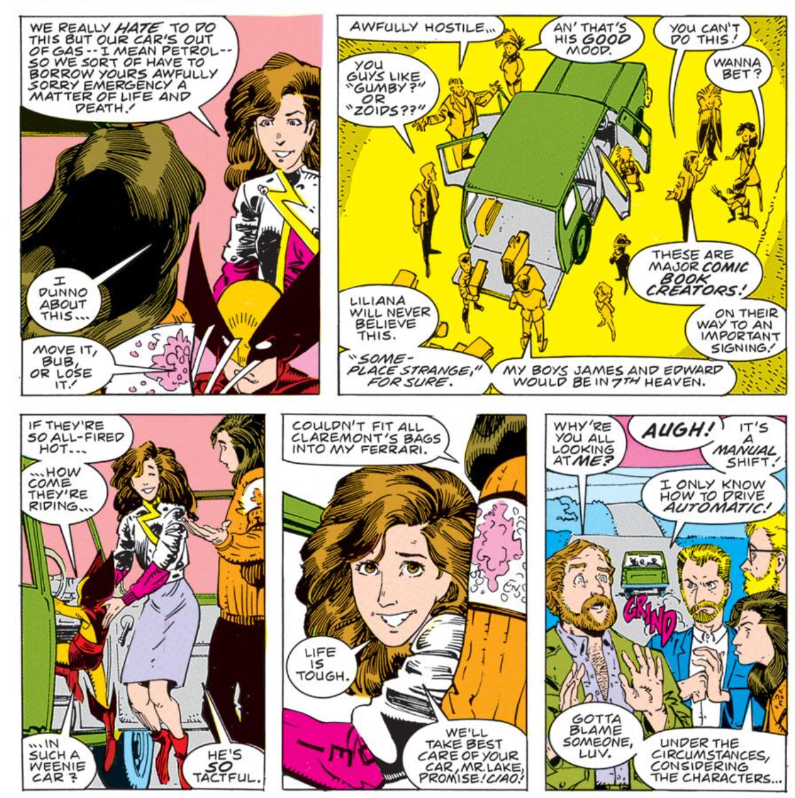 The Reference Section
The entrance to the Forbidden Zone is a massive structure comprised of physical representations of Marvel and DC crossover events; nearby is a crumbling house, with a sign saying "House of Ideas", the common nickname for Marvel. 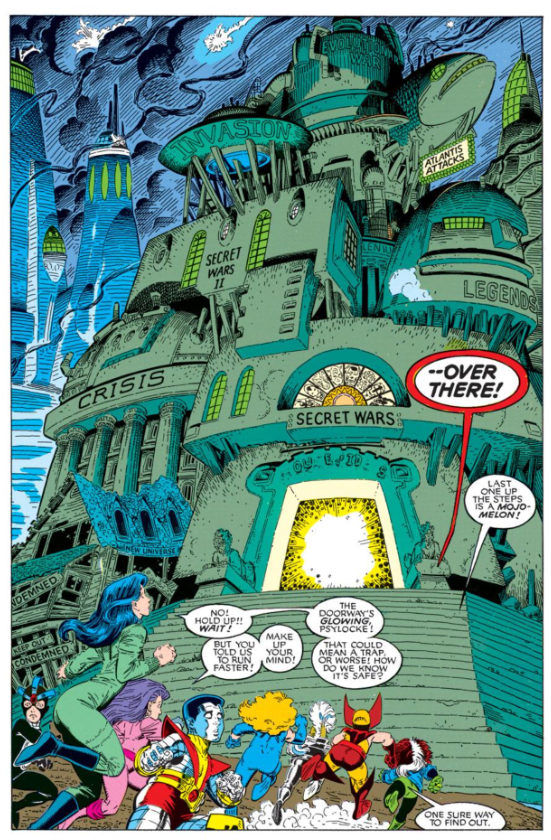 Inside, the entire structure is revealed to be entirely supported by a smaller structure, the House of Stan (Lee) and Jack (Kirby).

Artistic Achievements
I probably don't pay as much attention to the lettering as I should, but the point at which Orz gives way to Moede in this issue is noticeably jarring. 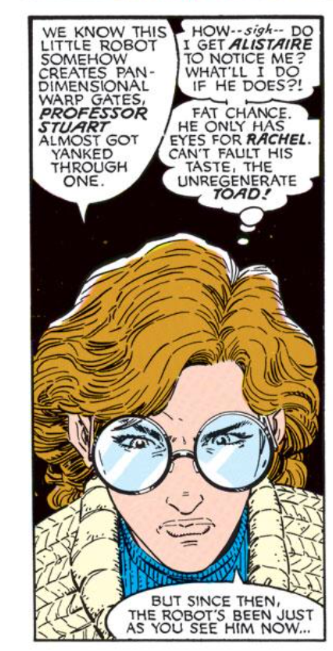 Teebore's Take
You know what, I kinda enjoyed this one. Having never read it before, given the title, I was frankly dreading it, as a little Mojo tends to go a long way, and the title implied a lot of time spent with the big glob of ranting flesh. Thankfully, Claremont seems to realize this, as Mojo himself isn't in this any more than he was the backup story in X-Men Annual #12. The X-Babies themselves are still bearable, and work well in this story, essentially creating an opportunity for Kitty to mourn the loss of the X-Men as she fights to protect pint-sized versions of them. Even though the "death" of the X-Men is the thing upon which Excalibur is built, that's a notion that the series itself hasn't really taken much time to explore, so using it as the emotional backdrop for this story is both effective and appreciated.

Of course, this is still a story featuring Mojo and the X-Babies, so, not surprisingly, it's also pretty whacky and a bit ridiculous. As is the case when Mojo is around, there's the usual bits of satire and industry commentary, from the House of Ideas to Mojo's efforts to lock the X-Babies into a contract, to Claremont himself appearing in the story. But like Arcade, Mojo and Mojoverse characters probably fit the more whimsical tone of Excalibur better than they do X-Men (plus, Excalibur having been formed when Rachel escaped from Mojo gives them a historical connection to the villain as well), and that, along with the emotional backdrop of the X-Babies helping Kitty mourn the X-Men (along with Art Adams' art, of course) help prevent this from being the hot mess I feared it would be.