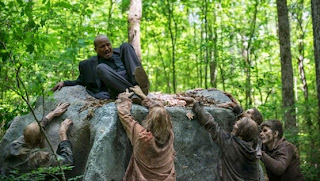 You can read my fellow Gentleman of Leisure Austin's X-aminations to find out all about the “Claremont quiet issue.” "Strangers" certainly had that feel. This episode came after a big climatic episode and, instead of non-stop action (like the preceding episode), it dealt with the characters and their interactions with each other. But that's not to say there weren't some big moments.

I suppose the most notable moment is the introduction of a new character. Father Gabriel Stokes is a priest who seems more-or-less unphased by the zombie apocalypse. However, he's obviously a coward which makes you wonder how he survived in this world for so long. They've made it very clear that Father Stokes is hiding something. I'm fairly sure I know what that something is but I should keep my mouth shut since I've read some of the comics.

I suppose the other big revelation is that some of the citizens of Terminus are still out there (including Martin whom I thought was killed by Tyreese) and they're stalking the group. They got to Bob, who was walking by himself while being upset about something. And while it was disturbing seeing them eat Bob's leg in front him at least Rick can make good on his promise to kill Gareth with his machete.

Another moment was Sergeant Abraham making an impassioned plea for the group to head to Washington DC. Rick agrees to this seemingly without much debate. To me that makes sense. Perhaps Washington DC is the key to stopping the zombie apocalypse or perhaps Eugene is full of BS. To Rick, does it really matter? Heading towards Washington DC is as good of a plan as doing anything else.

Last week I ranted about Carol and how much The Walking Dead loves her. I noted that while I think it is Carol who should be on the road to redemption the show seems to feel it's Rick who needs to be redeemed for exiling Carol. This week confirmed what I thought as Rick formally asked Carol if he and the group could join her. I would complain but maybe I should just get over it and move on.

Actually, getting over it and moving on seemed to be a bit of a theme for this episode. Some dirty laundry was aired and the general reaction was, “eh, whatever.” Tyreese wanted to make sure everyone was OK (like he is) with what Carol did which may or may not have happened off camera. Also, both Rick and Maggie decided that they were OK with Tara despite her coming from the Governor's camp with very little fanfare.

I'm not sure all of character's reactions, especially Maggie's, were realistic. However, it did put everyone's past behind them and gave the group a clean slate. If the end result is that the group is harmonious (at least for a little bit) and agree to a common goal then I'm all for it.

Other Thoughts:
At the beginning, when Daryl hears and/or senses something, all I saw was darkness. Should I have seen something else?

I'm surprised the show made a point to say that Sam was one of the people slaughtered at the beginning of the last episode.

Michonne without a sword is like Daryl without a crossbow.

I understand being careful (and, overall, I have no problems with the precautions the group took with him) but the group could have acted a little less dickish to Father Gabriel.

It seems odd that Carl is suddenly the trusting, ethical voice of the group. Where did that come from?

When Rick and company were dealing with the zombies in the water I feel like they could've easily killed the zombies from behind the food shelf instead of toppling it over onto the zombies.

I'm not convinced that someone could be as good with a sword as Michonne by just grabbing one and swinging it a lot.

Where was Carol heading to? Where did the car she was near come from?

So why was Bob crying? Is his seemingly eternal optimism simply a facade or did that zombie in the water get a bite on him? If so, did the Terminus crew inadvertently save Bob's life by amputating it?

It seems a bit silly that the Terminus group are able to sneak up and hunt Rick's group. Nothing from what we know of Terminus' origin and what caused them to turn to cannibalism indicates they'd be good at tracking and killing "in the wild."

I know I'm more approving of pacifism on this show than most but I was all for Rick's idea of killing all of the Terminus citizens last episode. They're cannibals and don't deserve to live. In fact, leaving some alive was utterly selfish since it meant they were free to kill other innocents. And now it has come back to bite them in the ass. But I'm not sure if killing the Terminus cannibals is more on the Shane side or Dale side of the spectrum. (I certainly hope that the lesson to be learned here isn't "kill everyone without discrimination.")
Newer Post Older Post Home
Posted by Dr. Bitz at 2:00 AM