Retro Review: The Boy Who Knew Too Much 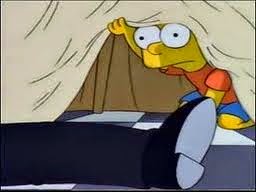 Or the One Where
Bart witnesses a crime while skipping school, then must decide whether or not to come forward in defense of the accused.

The Setup
On a particularly gorgeous day, Bart skips school but is pursued by Principal Skinner, only escaping him when he sneaks into the Quimby Compound.

Notable Notes
The Quimby/Kennedy connection really gets hammered home in this episode as Bart visits the Quimby compound, introduces himself as "Bart-Bart" to Mayor Quimby, then interacts with Arnold Schwarzenegger stand-in Rainier Wolfcastle, whose wife, like actual Kennedy Maria Shriver, Schwarzenegger's wife at the time, is named Maria.

This episode includes two very much "of its time" references, one to the Schwarzenegger flop Last Action Hero, and another to the dog from Frasier riding the dolphin from seaQuest DSV.

My mind forever associates Free Willy with this episode. "Oh no, Willy didn't make it! And he crushed our boy." Marge's bit about Bart's crazy uncle, specifically "shoot 'em all and let God sort 'em out" as always stuck with me as well. 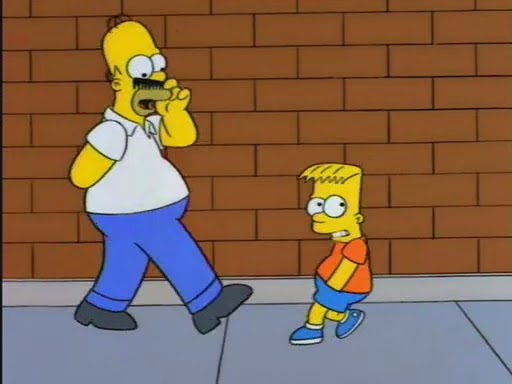 Quotable Quotes
Bart: Look, if I was under seventeen, I'd be in school, right?
Ticket Boy: Yeah, I guess you're right. Enjoy "Boobarama", sir.

Lisa: If you testify, Skinner will know you skipped school. Well, if Freddy Quimby didn't do it, I'm sure he'll be found innocent by a fair and impartial jury.
Homer: Aw, jury duty? I'll see that Quimby kid hanged for this!
Bart: Oh...
Lisa: I knew it was a bad idea to watch him open the mail.

Skinner: Justice is not a frivolous thing, Simpson.  It has little if anything to do with a disobedient whale. Now let's vote!
Homer: Uh, how are the rest of you voting?
Everyone: Guilty.
Homer: OK, fine. How many S's in "innocent"?
Everyone: Aw.
Homer: I'm only doing what I think is right. I believe Freddy Quimby should walk out of here a free hotel.

Bart: Mom, what if there's a really bad crummy guy who's going to jail but I know he's innocent?
Marge: Well, Bart, your uncle Arthur used to have a saying: "Shoot 'em all and let God sort 'em out." Unfortunately, one day put his theory into practice. It took 75 federal marshalls to bring him down. Now let's never speak of him again.
Bart: Mom. Mom...Mom!
Marge: Huh?
Bart: What if I can get this guy off the hook?  Should -- should I do it?
Marge: Honey, you should listen to your heart, and not the voices in your head like a certain uncle did, one gray December morn. 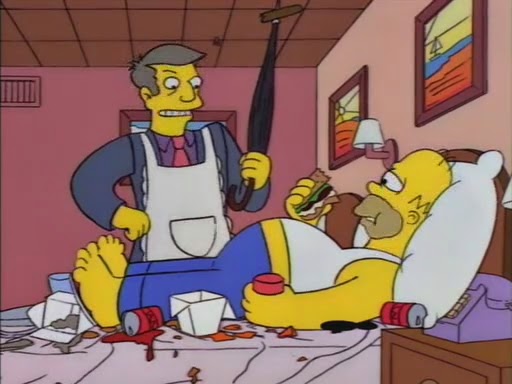 Teebore's Take
This is one of the all time great "put the moral screws to Bart" episodes, as he's forced to decide between letting an innocent man go to jail and getting punished for skipping school. Beyond that and some skewering of celebrity trials, this is just a really funny episode that gets the most out of its premise. It's also helped along by a wisp of a Homer B-plot, which is light on story but big on laughs as Homer intentionally deadlocks the jury in order to get the most out of being sequestered at a swanky hotel ("a free room, free food, free swimming pool, free HBO -- Ooh!  Free Willy!") followed by one of the show's great aural gags at the end, as Homer tries to use his "I'm awake" gag glasses on Marge not once, not twice, but three times. Together, it's a strong showing for the two characters firmly entrenched at this point as the stars of the series.

A solid Bart episode that's also one of the season's outright funniest. 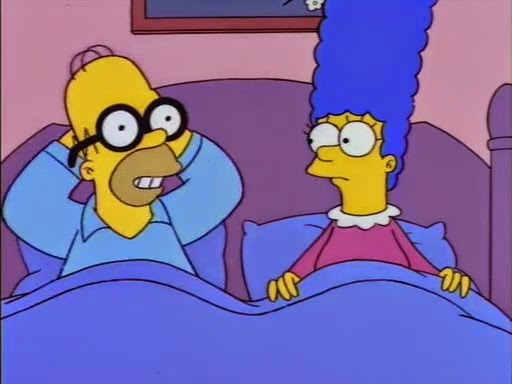