The Walking Dead 5x01: No Sanctuary 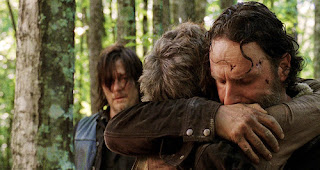 Hey, I'm back after a summer filled with me thinking about things I'd like to write about but never actually getting around to it. But, the summer vacation is over and The Walking Dead is back. So now I get to dive right back into that joy-filled world!

So...The Walking Dead really loves itself some Carol, huh? She single handedly navigated a zombie hoard to Terminus, took down the walls and most everybody inside (including using one of the most unrealistic ways of igniting a propane tank I have ever seen) and saved the entire group! After all that she was welcomed back to the group with open arms.

I would call this a redemption episode for Carol but I don't think that's how the show sees it. I think The Walking Dead sees this as a redemption episode for Rick. He finally gets a mean streak, realizes the “error of his ways” for “foolishly” banishing Carol and lets her back into the fold. Finally Rick has come back to his senses! At least, I think that's what they want me to think.

I probably spend way too much time trying to find the moral core to this show. Searching for ethics in a nihilistic presentation like this is probably a fool's errand. But even if a television show depicts a world where good deeds go unrewarded and bad guys win (under the thought that that's more realistic) doesn't mean the show has to be devoid of morals. Nihilism simply describes the universe a show exists in not how characters should act within that universe. So how does The Walking Dead have their characters act and what does that say about how the show thinks we should act under similar circumstances?

Right now I feel like The Walking Dead is holding up the Shanes and Carols of this world in high regard. That living in a post-apocalyptic world means you have to make tough decisions and making tough decisions means you kill anybody who is any hint of a threat and knowing the lives of multiple strangers isn't close to the worth of the life of a friend. The show seems to say the only thing keeping humans from being murderers, rapists and thieves are modern day conveniences. Thus, you must become a murderer and thief to combat that. Survival at any cost is the most valuable attribute. I could rail against these philosophies but there's only so much time we have. So let's just say that I disagree.

There were two bright spots in this episode regarding the nihilistic philosophy. First was when the group, escaping from Terminus, came across a boxcar with someone in it. Rick, becoming more and more like Shane all the time, had half of a mind to leave him. Glenn then said they needed to save the people because “that's still who we are, it's gotta be.” Of course, this sentiment is undercut by the fact that the person in the boxcar turned out to be crazy, evil (we would find this out later) and is immediately eaten by a zombie.

The second bright spot is when Carol came across her thematic darker self in Mary, the leader of Terminus. She went over the sad history of Terminus. It was supposed to be a sanctuary but an evil gang took it over. The original citizens eventually regained control and apparently decided that eating them (and then everyone else they came in contact with) was the best revenge.

Mary then said she and Carol were alike. Carol killed Mary vowing to never be like her. Mary is obviously one possible end to the path Carol is going down. Obviously I never believed that Carol would end up eating people but it's nice to see the show acknowledge that Carol needs to be careful with the path she's traveling and she needs to not cross the line. Even if I would argue she already has before.

This is just the season premier and I have no idea what the season arc will be. Maybe they will close in on morals I can agree with. But all indications are quite the opposite. I should note I can be OK watching a show where simply being a good person doesn't mean good things will happen to you. But I do wish that this didn't mean people stopped being good.

Other Thoughts:
So yeah, I probably spent too much time (in this post and many others) discussing the morals of the show as a whole instead of talking about what happened. But really, not a lot did happen. Terminus fell and the group reunited. That's about it. The episode was pretty much one big action sequence and I will say that in terms of an action episode it was entertaining and fun.

It was very nice of the "butchers" to stop killing people right when they got to the main characters. (And it was convenient they went from right to left.)

Speaking of the people getting slaughtered, the first person to die was Sam (the hippy from Indifference). He's played by Robin Lord Taylor who is the Penguin on Gotham.

So the guy with Tyreese (Martin?) asks why Tyreese kept him alive. It's a valid question. But why is Martin trying so hard to convince Tyreese to kill him?

Also, how did Martin get out of his wrist bindings?

I hinted at it above, but Carol showed impeccable aim lighting the propane tank with that rocket/mortar.

Why couldn't that guy who was crawling backwards away from the zombies get back up...or, you know, roll?

So am I to assume that candle room was a memorial to the original Terminus people who fell victim to that evil gang?

How appropriate that Mary is undone by someone with mud on their face.

I'm not sure leaving the dead Terminus butchers to turn is the right call. Why would you want to deal with MORE zombies?

It's kind of weird how one part of this episode's happy ending is Tyreese becoming comfortable with killing people.

So Morgan is back and he seems to be in good health! I have no idea where that is going.

Naturally, on the Talking Dead, executive producers Greg Nicotero and Scott M. Gimple talked about how Rick is slowly becoming what Shane wanted him to be. And of course they were excited about this. This is why I fear for the direction of the show.
Newer Post Older Post Home
Posted by Dr. Bitz at 1:13 AM