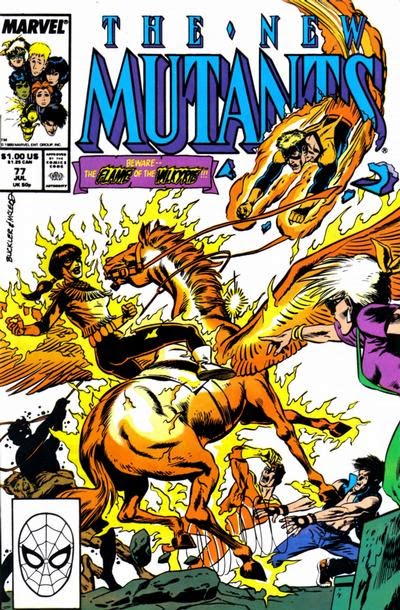 In a Nutshell
The New Mutants battle a possessed Dani with help from Dr. Strange.

Plot
In Hel, Hela plots to regain lost power, using Dani. In Russia, the New Mutants return Illyana to her parents. Suddenly, Dani sees a vision of death coming for her, then collapses along with Brightwind, burning up with fever. The New Mutants rush back to Ship, who scans Dani and determines her illness is not physical but mystical in nature. He suggests the New Mutants check with Dr. Strange. Later, they arrive outside Strange's Greenwich Village home, but they are greeted by his housekeeper Wong, who tells them Dr. Strange is dead. Dr. Strange, however, is not dead, and senses something evil about Dani's illness. Just then, Dani cries out in pain as she and Brightwind burst into flame and begin attacking the New Mutants. Via his astral form, Dr. Strange intervenes, drawing Dani's astral form from her body. But this just allows the monster in control of her body to attack even more viciously than before. 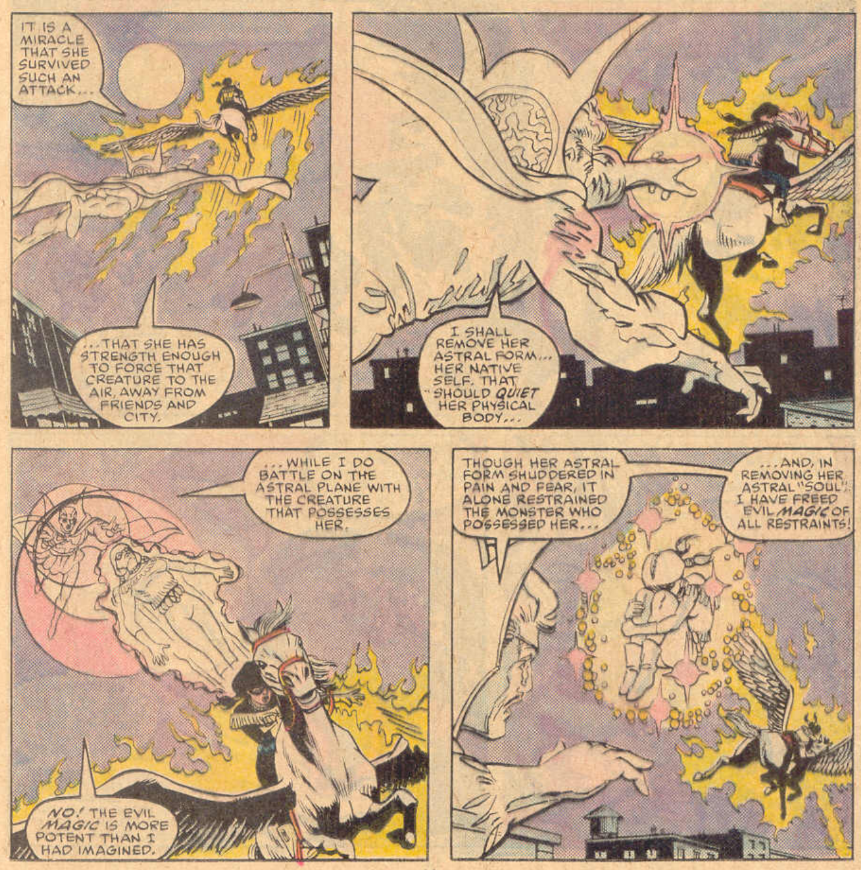 As the New Mutants do their best to protect themselves and limit the damage done by their possessed teammate, Dr. Strange urges Dani's astral self to resume control of her body. She is reluctant to do so, however, due to the extreme pain she feels inside her body, until Rahne is injured saving a small child. Dani returns to her body, and takes control long enough to use her power to generate an enormous machine capable of generating enough ice to quell her and Brightwind's flames, locking them in a block of ice. The New Mutants take the frozen Dani back to Ship, while Hela watches from afar. Though Dani failed to kill the New Mutants and send them to Hela's realm, Hela declares she is not yet finished, and her revenge is just beginning.

Firsts and Other Notables
Dr. Strange guests stars in this issue, though for reasons known only to those who have read his series, he currently wants the world to believe him to be dead (and he's earing an eyepatch), so he doesn't interact directly with the New Mutants, instead helping Dani via his astral form and later talking to the New Mutants in his guise as Dr. Stephen Sanders. 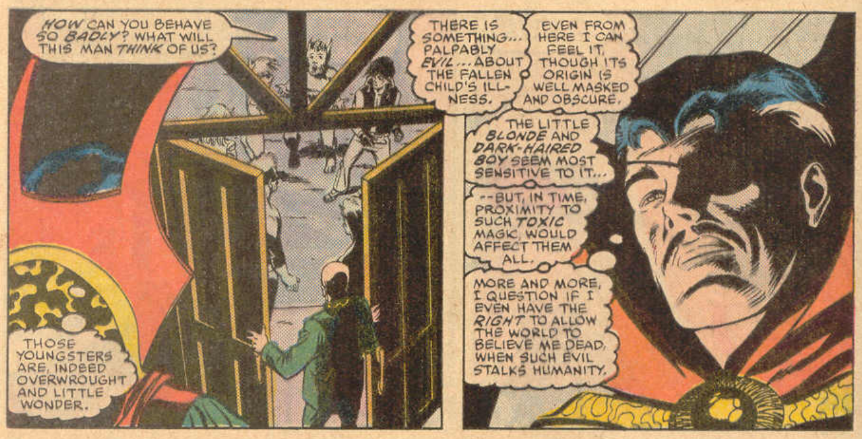 Young Illyana is returned home to her parents in Russia this issue, officially ending a journey for the character which began when she was abducted from that home by Arcade all the way back in Uncanny X-Men #145. She'll still be in Russia with her parents when next we see her, because her story is far from over, even if this is her last appearance in New Mutants.

Rich Buckler is back on art, providing layouts finished this time by Roy Richardson, a name I don't think I've encountered anywhere else.

The Chronology Corner
X-Factor is noted as being away from Ship during this issue, due to the events of X-Factor #42.

A Work in Progress
Just before passing out (and then turning into a demonic flame monster), Dani has a vision of death all around her. 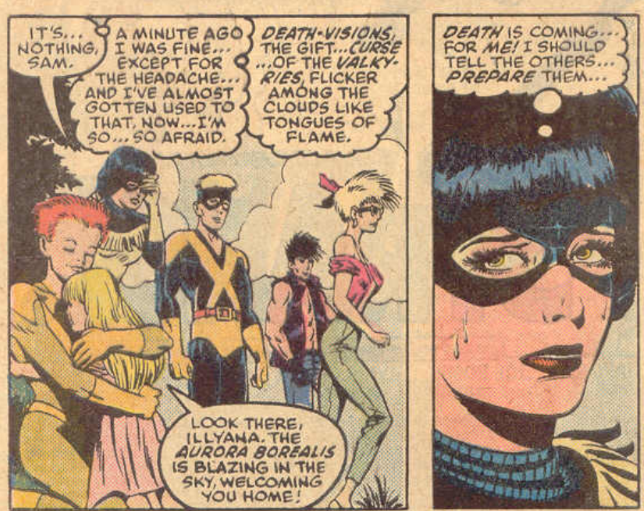 Returning with the unconscious Dani to Ship, they are told that they don't need to take Dani to a doctor as Ship can perform medical scans on her. Which seems like something he maybe should have mentioned previously, when the New Mutants and X-Factor were talking about taking Dani to a doctor for her headaches. 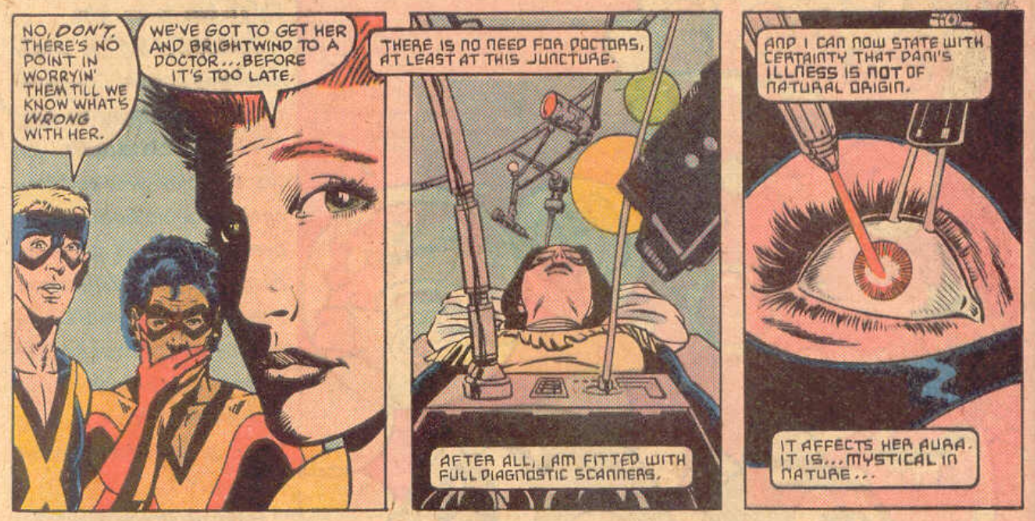 Suggesting that Simonson at least recognizes how ridiculous Dani's power has become, Sam tries to explain it all to the X-Terminators, prompting Rictor to joke that he thought figuring out Illyana's power was hard. 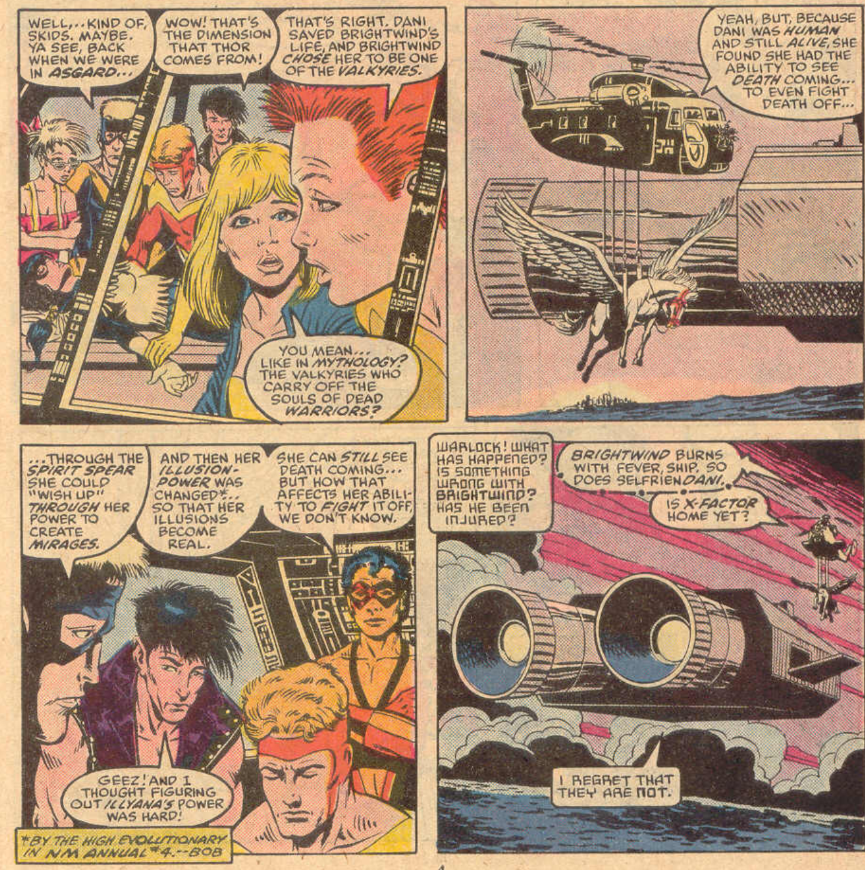 Dr. Strange cryptically says that the fate of Asgard lies with the New Mutants.. 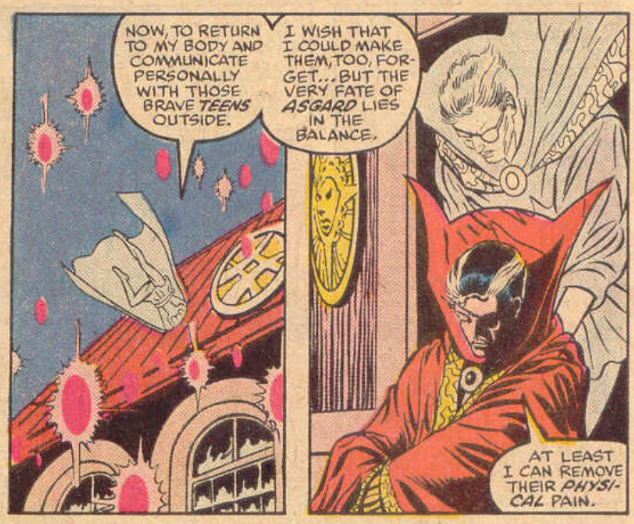 Teebore's Take
With this issue, the Dani subplot (which has mostly amounted to her complaining about having a headache for seven issues or so) finally moves into the foreground, Dr. Strange pops in because magic, and it's confirmed that Dani's illness is linked to Asgard and the as-of-now vague machinations of Hela. On the surface, it's a fairly straightforward, mostly self-contained story (it picks up on previous threads, and Dani's fate remains unknown, but her transformation and defeat begins and concludes within these pages), and being the first official outing for the combined X-Terminators/New Mutants under one banner, Simonson does a nice job of giving everyone in the extra large cast a chance to show off their powers and contribute in some way. However, like Uncanny X-Men #246, this issue is an inauspicious beginning to a long running storyline, one that will take a few issues yet to really kick off, but once it does, it will (not quite as drastically or experimentally as in X-Men) shake up the makeup of the entire series.