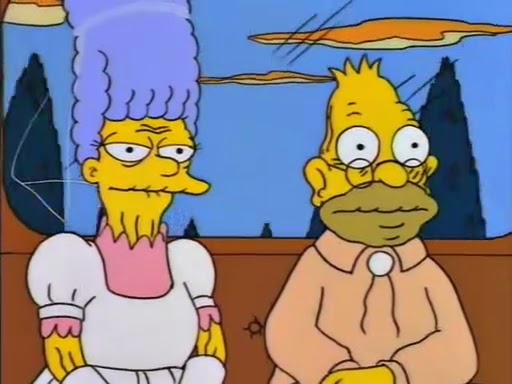 Or the One Where
Grampa dates Marge's mother, until she falls for Mr. Burns instead.

The Setup
After they attend Maggie's birthday party, Marge realizes that both her mom and Grampa are lonely, and suggests they spend some time together.

Notable Notes
Though by no means her last appearance, this is pretty much the last time Marge's mother is directly featured in a story until, arguably, season 21's "Moe Letter Blues". Most of her subsequent appearances are in the background of scenes or briefly in flashbacks.

Long before I ever saw The Graduate, I saw this episode, the ending of which directly parodies the ending of the film. Another case of The Simpsons introducing me to an iconic bit of pop culture.

Also, this episode taught me the Armour hotdog jingle, which is somewhat less culturally significant, but nonetheless true... 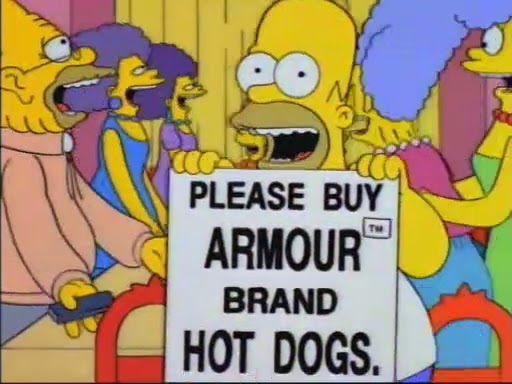 Quotable Quotes
Marge: Well I think it's wonderful that your father has fallen in love with my mother.
Homer: Well I'm opposed to the whole thing. Damn opposed!
Bart: He's damn opposed. Damn, damn, damn opposed!
Marge: Bart! Homer, what possible reason could you have against Grampa being in love?
Homer: If he marries your mother, Marge, we'll be brother and sister. And then our kids...they'll be horrible freaks with pink skin, no overbites, and five fingers on each hand!

Marge: He's an awful, awful, awful man! I guess if he makes Mom happy, that's all that really matters.
Homer: That's right, money. Your money's happiness is all that moneys.

Bart: I'm going to keep the Mary Worth phone right here. Her stern but sensible face will remind me never to do anything so stupid again.
Milhouse: Hey Bart, you want to go play with that X-ray machine in the abandoned hospital?
Bart: Sure...

Marge: What about Abe Simpson? Don't you have any feelings for him?
Jackie: Oh, he's a dear. But he's too much of an old fusspot.
Marge: We're all aware of Grampa's problems, but compared to Mr. Burns, he's Judge freaking Reinhold!
Jackie: ...I don't know who that is.

Lisa: Where's Grampa?  Wasn't he invited?
Bart: Yeah, but his reply envelope just had a check to the gas company in it.

Teebore's Take
Historically, Grampa episodes have never been among the show's best, particularly since, for whatever reason, the writers seem insistent on building such episodes around a romance-du-jour: Bea in "Old Money", Marge's mom here, that old lady who likes guys who can drive in "The Old Man and the Key", and, creepily, Selma (not coincidentally, the all-time greatest Grampa-centric episode, "Raging Abe Simpson and His Grumbling Grandson in 'The Curse of the Flying Hellfish'" does not feature him falling for a woman). Of those various romantic endeavor Grampa episodes, this is easily the best of the lot, mainly because, while not exactly a strong supporting character herself, Marge's mother is at least someone who has appeared before and has a connection to the main characters, rather than a one-off character created for the sake of the episode's story, but also because an increasingly-tyrannical Mr. Burns turns in another strong supporting showing. But all that and Homer's hilarious panic at the thought of his father marrying Marge's mother aside, this is really the best of the Grampa-centric romance episode simply due to timing, coming as it does when the show is firing on all cylinders, and nearly everything it turns out is comedy gold.

Romance-du-jour episodes for Grampa are no great shakes, but this is the best of the bunch. 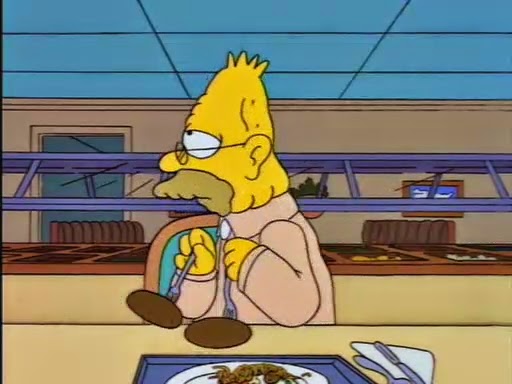