The Walking Dead 5x03: Four Walls and a Roof 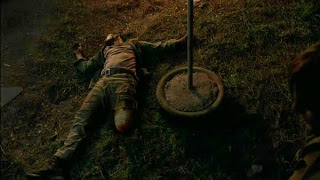 So, everything came to a head pretty quickly, huh? I figured the Terminus group would be hunting our protagonists for a good half of a season. Instead, they barely got two episodes. Not that I'm complaining.

Not only did everything come to a head quicker than I thought, it came without much fanfare. The Terminus group tried to set a trap for Rick's group. However, Rick's group (predictably) flipped the tables on them, Gareth gets hacked by the machete Rick promised to hack him with and that was that.

The anticlimactic nature of the Terminus/Rick's group showdown fit with this episode. "Four Walls and a Roof" was mostly focused on character work. In the end the Terminus group weren't so much antagonists as they were catalysts for Rick's group to look at who they currently are and what they may become.

Two quotes from this episode stood out to me. Firstly, there was Maggie, after Father Gabriel expressed disbelief at the violence in a house of worship, saying “It's just four walls and a roof.” (Hey, that's the title of the episode!) A line given more weight considering the faith of Maggie's father.

I'm a very pragmatic man. I don't get bogged down with symbols or ceremony. I wouldn't run into a burning building to save an American flag and I've always thought that Rick group's obsession with burying people seemed silly. So setting a trap and killing people in a church doesn't bother me at all.

But the line itself seems to be referring to more than this particular incident. It refers to the view that the societal constructs and mores of the past are no long in affect. It says that, in the zombie apocalypse, anything is allowed in the name of survival. This, of course, gets dangerously close the nihilistic philosophy The Walking Dead espouses and a philosophy that annoys me. It's probably also a reference to the fact that, in light of the recent zombie uprising, belief in a benevolent God is most likely on the decline. (Or perhaps Maggie is simply saying that after Father Gabriel abandoned his people and locked them out this church no longer became a sacred place?)

However, nihilism wasn't on complete display this episode as another quote brought an opposing view. This quote was from Bob who, for the bulk of this episode, was dying. Before drawing his last breath  he told Rick “Nightmares end, but it shouldn't end who you are.”

This one line gave me hope. Hope for the show and hope for the characters. Perhaps the end game of this series isn't to have the characters abandon all morals. Perhaps, dare I dream, the characters realize that they need to maintain their humanity and their ethics because if surviving the apocalypse means you lose yourself then that's too high of a cost.

I'll be honest. Bob's eternal optimism has been a bit grating and felt hollow. But I'll take any rays of hope I can find.

Other Thoughts:
And so we say a long goodbye to Bob. Bob, we hardly you knew you...literally. I was fairly neutral to Bob but this episode was still sad because, in any form of story telling, a plot about someone slowly yet inevitably dying and them having to come to terms with it is tough for me.

Speaking of Bob's death, we find out he was indeed bit and the Terminus cannibals were eating tainted meat! It's a shame nothing really came of that.

If I was Bob, I'd have kept my zombie bite from the Terminus group. Just let them continue to eat my tainted meat and hopefully they get their comeuppance. Well, I say that but actually I have no idea how I'd react if I was being eaten by people.

I question how Bob kept his bite hidden from Rick, Sasha and company. You think there would have been bleeding which would have caused suspicion.

We learn more about Father Gabriel. He basically closed the doors to the church and didn't let anybody in. It's repugnant but, at the end of the day, he's still redeemable? Maybe this show is just getting to me despite myself.

It's a good thing Gareth spilled the beans about Carol and Daryl driving off. Otherwise, he could've pretended like he had them as prisoners and used their absence as a bargaining chip.

Maybe everyone should've heard Tara's plan before making any decisions about going to Washington D.C.

Speaking of Washington, I can't say I'm a fan of the group splitting up again.

I think it was a bit selfish of Bob not to tell people he was bitten. By not saying anything he put the entire group in danger.

I'm not sure the "forgiveness" route was the path to take by Tyreese with Sasha and her hatred of the Terminus cannibals.

I was originally very upset that Rick and company didn't kill the Terminus group right away. But the whole "we're saving our bullets" made sense...and gave Rick a pithy action hero line to boot.

Michonne got her sword back!

If Carol was around, she'd have chastised Sasha for letting Tyreese kill Bob instead of doing it herself.

I feel like The Walking Dead refuses to recognize just how hard it is to penetrate a skull with a knife.

Was it just me, or did this episode feel like it had 100 endings? It was The Return of the King of The Walking Dead episodes.
Newer Post Older Post Home
Posted by Dr. Bitz at 11:46 AM