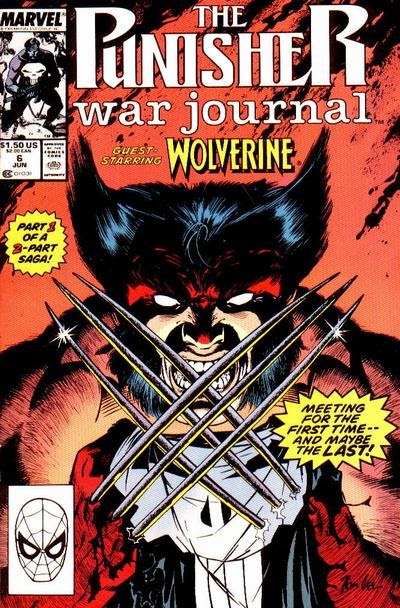 "On the Track of Unknown Animals / "Endangered Species"
June-July1989

In a Nutshell
Wolverine & the Punisher clash for the first time.

Plot
Issue #6: Worried that the Punisher has been pushing himself too hard lately, his associate Microchip insists he take a vacation, and sets him up with an African expedition to the Congo in search of rumored dinosaurs, being headed up by an old friend of Microchip's. Meanwhile, in Madripoor, Wolverine encounters a transporter for a ring of poachers specializing in endangered species. After taking care of the transporter, Wolverine sets out for Africa to shut down the ring. In the Congo, Punisher acts as security for the expedition, unaware that the leader's wife, Nora, and one of the African guides are secretly poachers. When they kill a local boy who discovered their secrets and blame it on a gorilla attack, Punisher investigates and is attacked himself by a gorilla who escaped the poachers. Forced to defend himself, Wolverine oversees him attacking the animal and assumes he's one of the poachers. The two come to blows, with Wolverine seemingly slaying the Punisher and leaving him for dead. 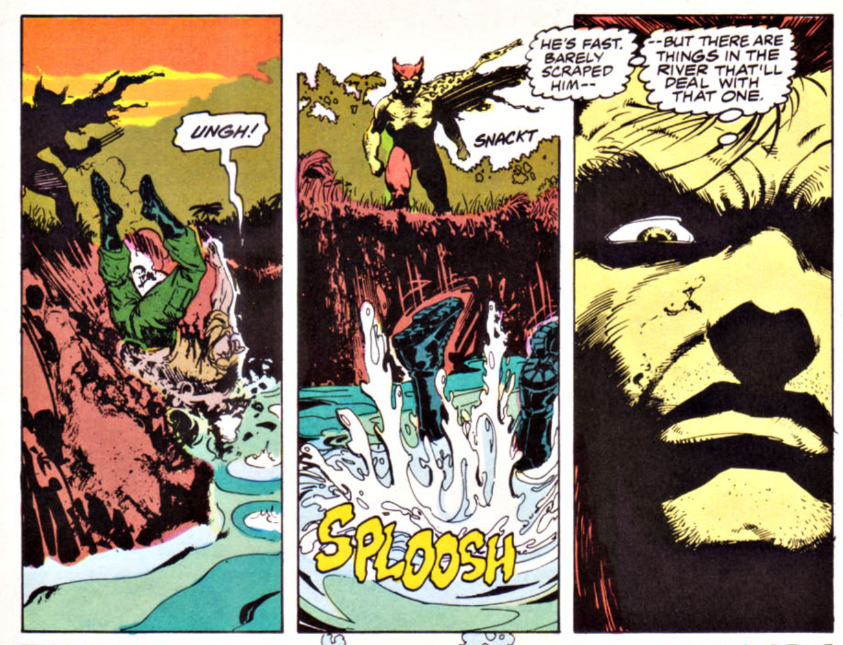 Issue #7: The Punisher, having survived Wolverine's attack, heads off into the jungle in pursuit of Wolverine. At a nearby village, the expedition continues its search for living dinosaurs. Nora manages to get one of the locals to tell her where the creatures might be, and she runs off with her accomplice. They find the dinosaurs and are about to kill the woman who helped them when Wolverine appears, followed closely by the Punisher. Each thinking the other is working for the poachers, they fight once more. Just then, the rest of the expedition arrives and realizes Nora is working with the poachers. The Punisher is forced to kill her to save the dinosaurs, but lets Wolverine go. Wolverine tracks down Nora's accomplice, wounded in the fight, and leaves him to die. The Punisher comes along shortly thereafter, assuring the man will be killed by a group of apes headed that way. Returning to New York, the Punisher finds a six pack of beer waiting for him, along with a note from Wolverine indicating the tycoon behind the poachers has been handled.

Firsts and Other Notables
This story represents the first meeting, publication-wise, between Wolverine and the Punisher, two characters who, thanks to their similar anti-hero natures and predilection towards violence, as well as their immense popularity, will be paired together or set against one another fairly regular throughout the 90s. Offhand, I can't think of any story which suggests an earlier meeting between them, chronologically, but I wouldn't be surprised if some random issue of Wolverine Origins or whatnot which I haven't read has since established they crossed paths in Vietnam, or something like that. 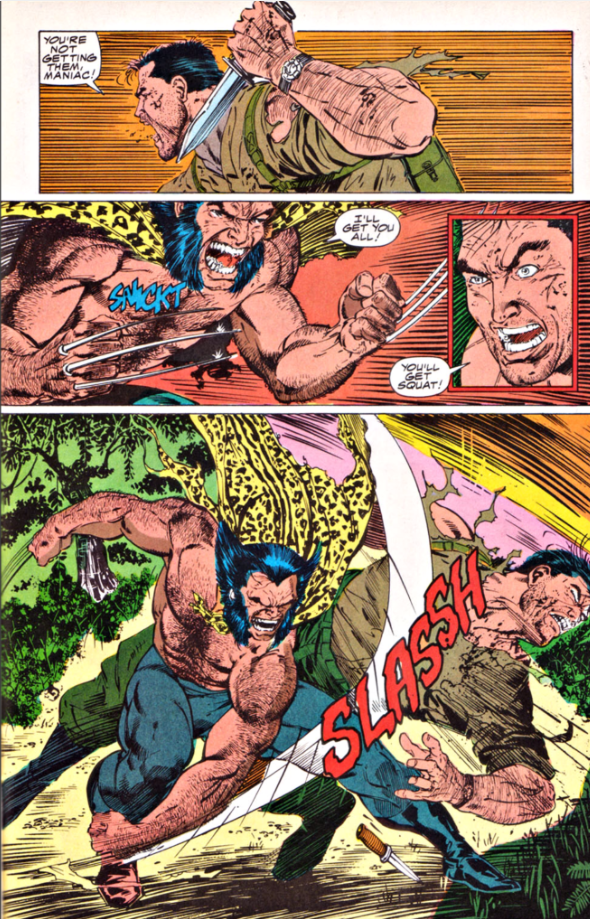 Just prior to a stint as a guest artist on Uncanny X-Men (itself prior to becoming that series' regular penciler), this is actually Jim Lee's second time drawing Wolverine, after a pair of appearances in Alpha Flight #53 & #61, when Lee was the regular penciler on that series (which was his first regular gig for Marvel).

Originally created as a Spider-Man villain in the 70s, by 1989 the Punisher's popularity was, like Wolverine and the X-Men's, rising fast, such that, in 1988, he received a second ongoing series, The Punisher War Journal. I believe the conceit of the series was supposed to be that it featured tales from the Punisher's, uh, war journal, though I don't know how long that lasted before it just became another book featuring the Punisher. Certainly, in these two issue, the journal element is fairly limited, but I have no idea if that's how it always was.

Both of these issues (and, I assume, other issues of this series) feature one page informational pieces about some of the weapons the Punisher uses.

A Work in Progress
Wolverine is said to be running the Princess Bar, which isn't quite true - he's more of a silent partner to O'Donnel, who manages the day-to-day operations at this point.

The Best There is at What He Does
In issue #6, Wolverine says it will take him a "couple of hours" to heal from a knife wound. 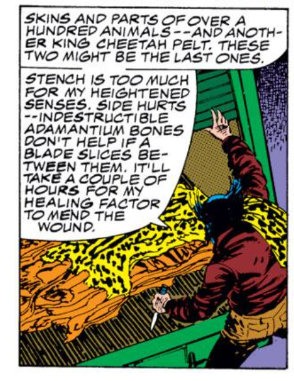 Yet in issue #7, he can already feel a gunshot wound start to heal moments after the fact.

Teebore's Take
This two-parter is notable for two things: chronicling encounter between Wolverine and Punisher (two characters who, due to commercial viability and shared sensibilities, will be paired frequently in the years after this story was first published, to the point where the characters even to this day are considered to have one of those special, prickly comic book relationships) and featuring Jim Lee's first extended work with Wolverine, a pairing that will, in part, be responsible for the highest selling comic book of all time.

In terms of the story itself, it's actually not all that bad. I'm not sure dropping these two characters into the African jungle to hunt down some poachers and protect some still-alive dinosaurs, of all things, (after the obligatory misunderstanding fight, of course) is how I would have guessed their first encounter to go down, but for the most part, it works. If anything, the title character suffers from the constraints of the plot the most, as the Punisher being in Africa as part of an enforced vacation seems like a bit of a stretch, but Wolverine's involvement is born of a surprisingly deep cut of his characterization for a guest appearance. Lee's storytelling is still rough and his figure work isn't quite yet what we think of when we think "Jim Lee", but it's effective enough. Given how darkly serious and humorless some of the later Punisher/Wolverine pairings will be, this is a pleasantly fun and comic book-y (in a good way) first encounter between two characters who are eponymous with some of the worst excesses of 90s comics.