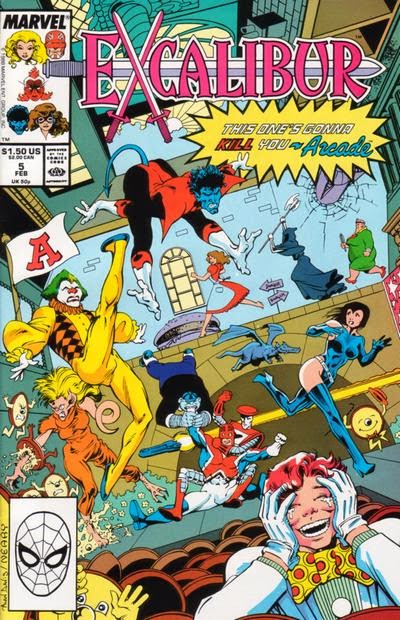 In a Nutshell
Excalibur battles the Crazy Gang inside Murderworld.

Plot
In Murderworld, Courtney Ross comes face to face with the Crazy Gang, confused as to why Captain Britain and the rest of Excalibur aren't doing anything, not realizing the two teams' have switched minds. Determined to put some distance between their foes, Excalibur-as-the-Crazy Gang grab Courtney and run off. From the control room Arcade watches this when Shadowcat suddenly appears, phasing through the monitors. Leaving Lockheed to guard Miss Locke and Mr. Chambers, she pulls Arcade into Murderworld. Shadowcat then proceeds to take control of Murderworld using a program she and Doug Ramsey wrote together, turning Murderworld against Arcade as Courtney continues to flee from the Crazy Gang. The two teams collide on Murderworld's stage set, and Captain Britain, still trapped in Tweedledope's body, gives Courtney a device he created. 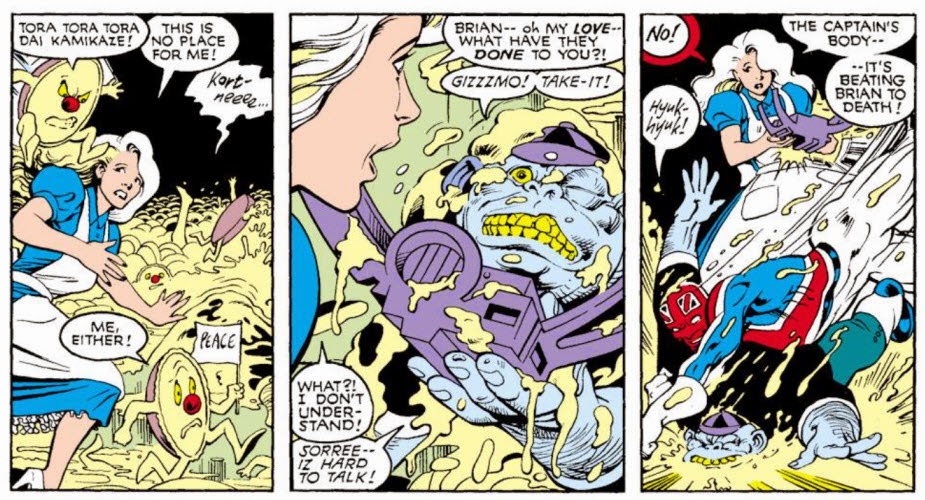 Reasoning it can reverse the effect of the mind swaps, Shadowcat tasks Courtney with using it, as in her phased state she risks damaging the device. Working together, they're able to restore Excalibur to normal, after which they make short work of the Crazy Gang and hand them, and Arcade, over to the authorities. A few days later, Courtney is preparing for a date with Brian when a woman who looks just like her appears at her door and zaps her. Nearby, Brian discusses his feelings for Courntey and Meggan with Kurt before leaving to meet Courtney. When he arrives at her apartment, the woman inside kisses him, and Brian misses the human-shaped pile of ash on the floor.

Firsts and Other Notables
At the end of the issue, Courtney is confronted by Sat-yr-9 and killed (as evidenced by the ashen outline of a body in Courtney's apartment, seen in the last panel of the issue), with Sat-yr-9 then taking Courtney's place. In a nice touch, Sat-yr-9 is seen carrying the collander helmet and strange device worn by the UFO hunter in issue #3, the one who was transported to Sat-yr-9's reality by Widget. 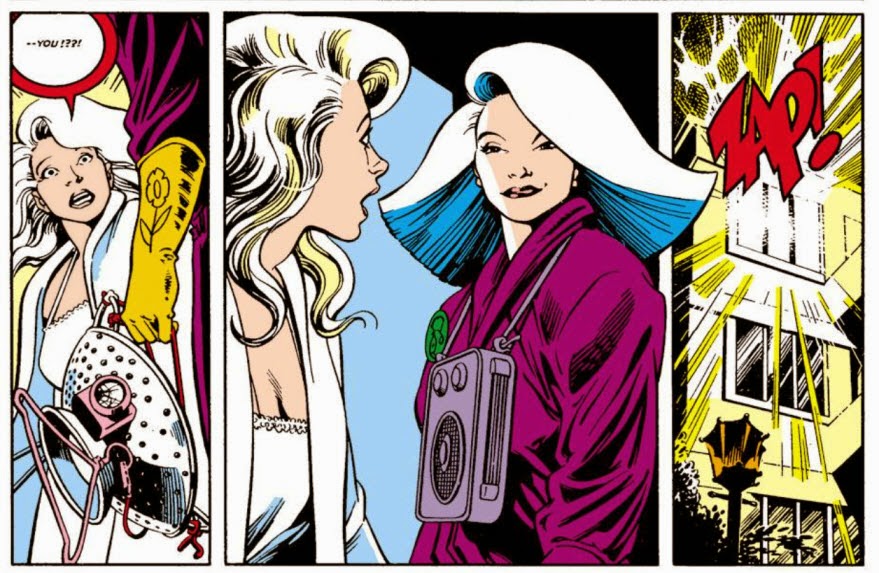 After Sat-yr-9 has unknowingly replaced Courtney, Brian realizes that "Courtney" looks just like Saturnyne, something he probably should have realized sooner given that they are, essentially, the same person (albeit from different realities). He does not, however, realize that Courtney has been replaced by Sat-yr-9, and doesn't exactly object when she puts the moves on him.

This whole Courtney/Sat-yr-9 replacement business becomes another dangling Claremont plot, and the full ramifications of the switch won't be addressed until issue #55. 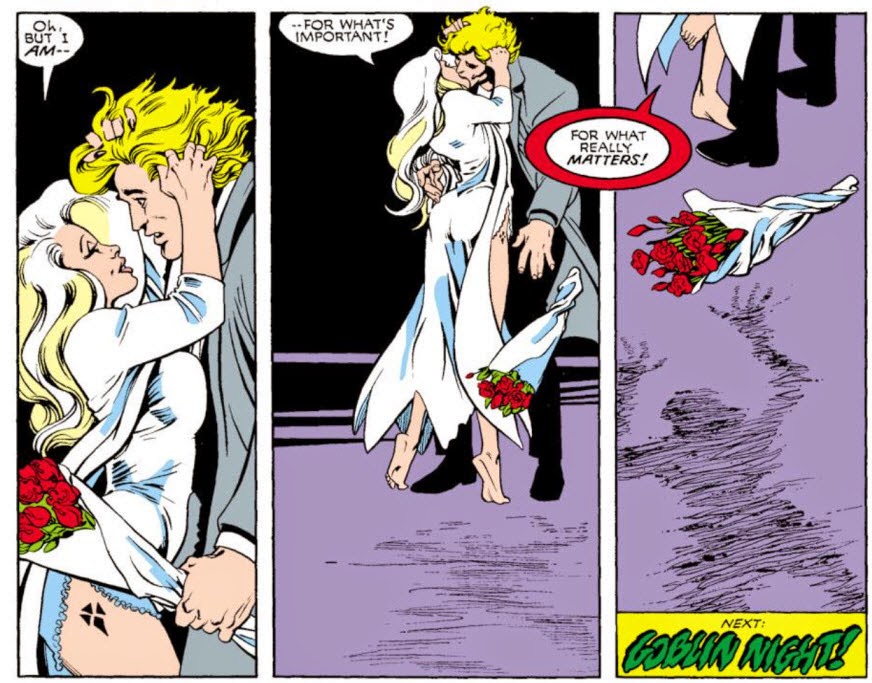 The back cover features a Captain Britain pin-up.

A Work in Progress
Apparently, Captain Britain didn't destroy all of Kitty and Doug's software in issue #3, as Kitty is able to use a program she wrote with Doug to take control of Murderworld in this issue. She also references the time she and Colossus were brought there, in X-Men #197.

Courtney and Kitty take a shine to each other in this issue.

It's noted that Tweedledope does possess an innate knack for inventing things, suggesting he may have played a role in the creation of Widget in issue #1 after all. 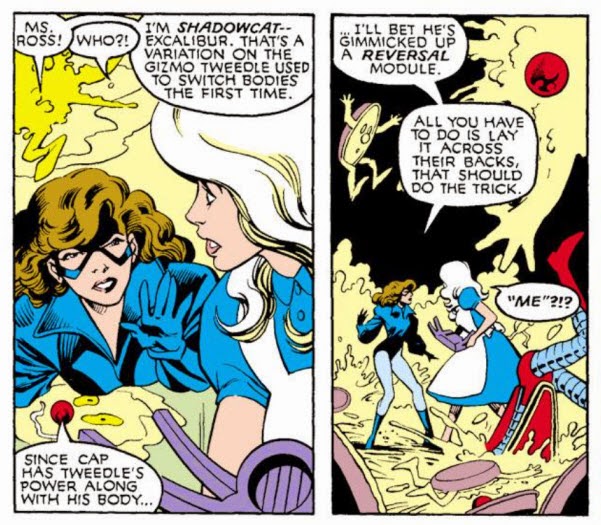 Brian and Kurt have a drink at the Flying Finnish pub, which Brian notes has having been a hangout of his and Courtney's while they were at university together. It did, in fact, appear in his solo series, and the photo of the pair we saw in issue #2 had the pub's sign in the background.

The Reference Section
Courtney finds herself riding the space ship of Dan Dare, a British comic book hero created in the fifties. 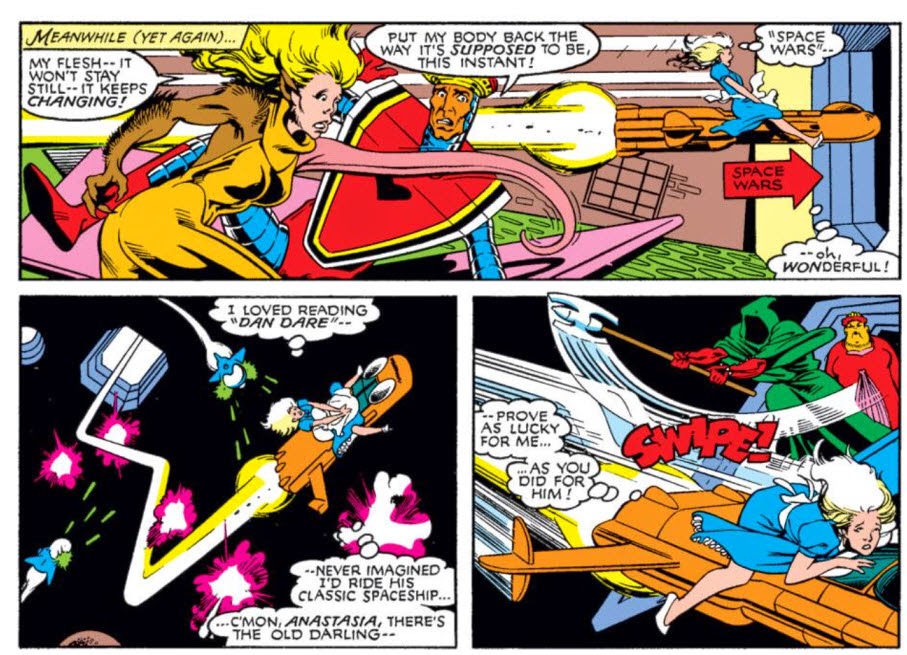 Young Love
In the wake of their escape from Murderworld, Meggan worries about the attention Brian is showing Courtney.

Turns out she's right to be worried, as Brian, in a not-so-great moment, later admits to Kurt that he still has feelings for Courtney and is getting sick of how much Meggan fawns over him, just before going on a date with Courtney. 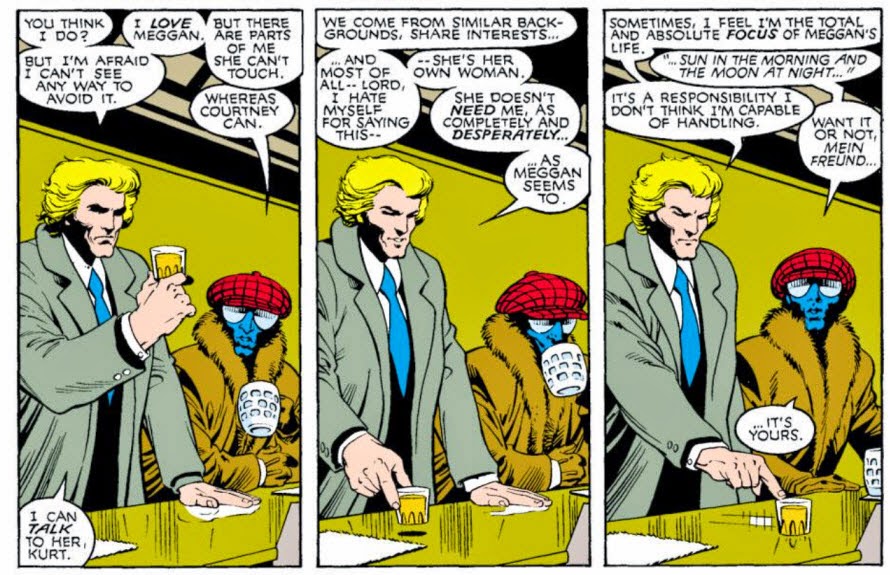 Teebore's Take
Surprisingly enough, given that this basically just an issue-long fight scene set inside Murderworld, of all places, this is probably my favorite issue of the series so far. In Murderworld, the book finds a setting that perfectly fits the whimsy-with-a-dash-of-the-macabre tone that Claremont and Davis continue to strike with the series, while that tone in return matches perfectly with Murderworld, a place that is supposed to be deadly serious yet goes about that serious business in a fairly silly manner.

This is arguably the most action-packed issue Davis has yet to draw, and he handles it as well as he handles everything, putting a lot of care into depicting a smorgasbord of settings within Murderworld, while Claremont shows off his ability to use action to inform character (Courtney, in particular, comes off extremely well in this issue, cool and calm on the outside while freaking out to herself, very reminiscent of pre-"Inferno" Madelyne; a shame, then, that she is vaporized at the end of the issue). Strong action, art and characterization: everything combines for an issue that, while not terribly deep or groundbreaking, stands as the high point of the young series.

Next Issue
Tomorrow, we meet new villains and an old friend in Wolverine #4. Next week, the X-Men meet X-Factor in Uncanny X-Men #242, while Illyana meets her destiny in New Mutants #73.
Newer Post Older Post Home
Posted by Austin Gorton at 12:00 PM