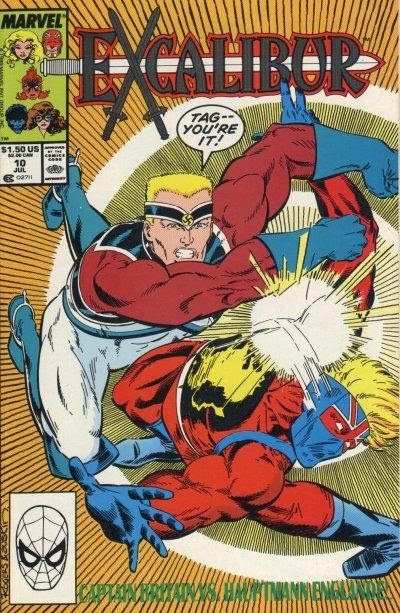 Plot
At the Tower of London, Captain Britain battles Hauptmann Englande, though Captain Britain, still suffering a decrease in his power, is easily over-matched by his foe. Below, Reichsminister MacTaggert and Callisto attempt to escape with their hostage, Brigadier Stuart, while the family of lizard-like tourists wander into the battle. As debris from the battle threatens the young Calvin, Captain Britain manages to save him, but it leaves Captain Britain open to an attack from the Lightning Squad's Shadowcat and Nightcrawler. Seemingly defeated, he musters enough strength to knock out Hauptmann Englande just as the Lighning Squad's Meggan reveals she's actually Excalibur's Meggan. She takes out the alternate Nightcrawler and rescues Brigadier Stuart as a revived Phoenix defeats the alternate Shadowcat. 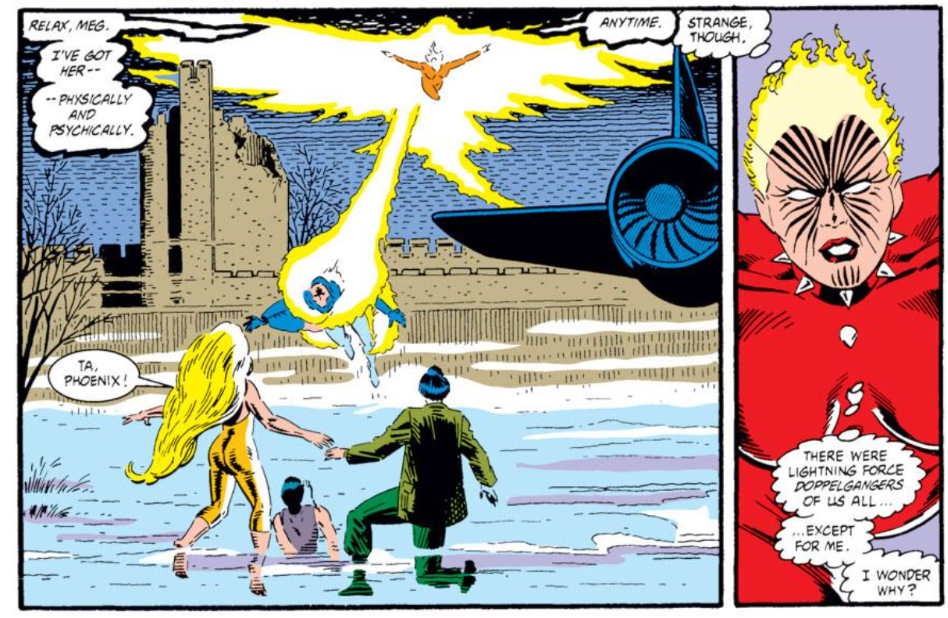 Inside the tower, Excalibur's Shadowcat and Professor Stuart encounter Widget, learning he can open doorways to other realities and realizing he's responsible for bringing Reichsminister MacTaggert and Callisto to their world. However, Shadowcat is forced to shutdown Widget's portal by phasing through part of him, rendering him inert, and Stuart tells her Widget wasn't created by WHO. Later, in the great hall of the Tower, WHO hammers out an agreement with Reichminister MacTaggert and the Lightning Squad to get everyone returned to their properly realities, much to Shadowcat's consternation. The battle done, Shadowcat retrieves something from the Tower, then she and Phoenix head for home. They fly past the office of Courtney Ross, who eagerly anticipates possessing their power and potential for herself.

Firsts and Other Notables
Marshall Rogers and Terry Austin fill-in on art. The pair is previously collaborated together on a noteworthy and fondly remembered run of Detective Comics with writer Steve Englehart, but their work here is...serviceable, at best.

Fake Courtney Ross pops up at the very end, plotting to acquire the power and potential of Shadowcat and Phoenix for herself; not sure where, if anywhere, that's going. 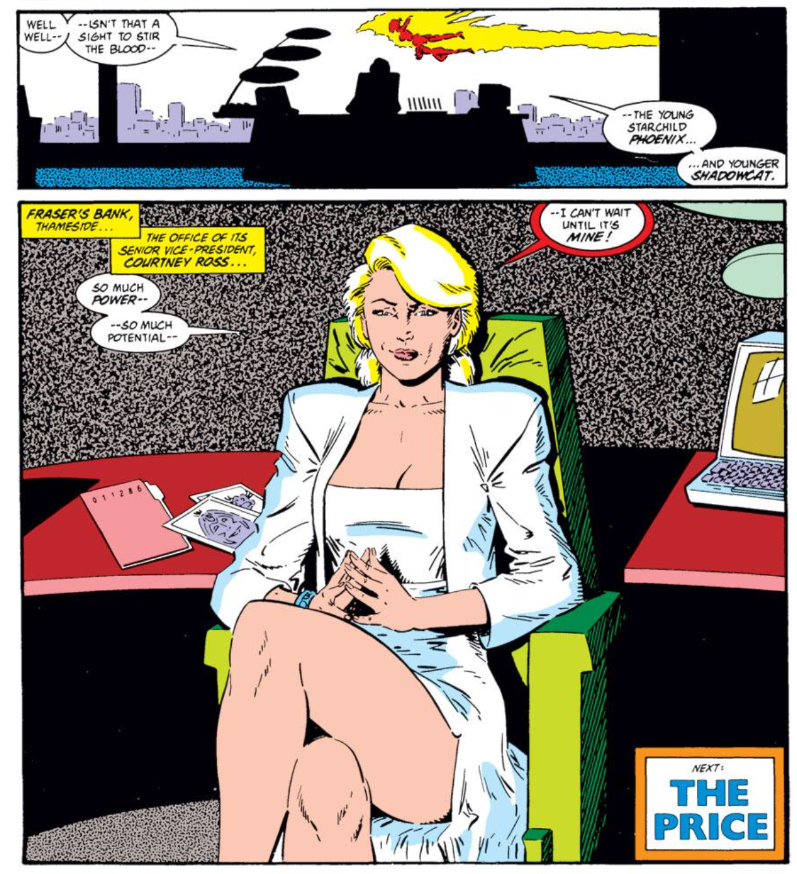 The lizard/dinosaur family who were teleported to the Tower by Widget last issue will next appear in issue #51.

I dunno who designed this cover, but the title words are almost laughably difficult to read.

A Work in Progress
At one point, Captain Britain, in attempting to prevent the lizard boy from getting caught in the crossfire of his fight with Hauptman Englande, references Mickey Scott. A footnote points out this story occurred in Cap's solo series, but I'm not familiar with it offhand. 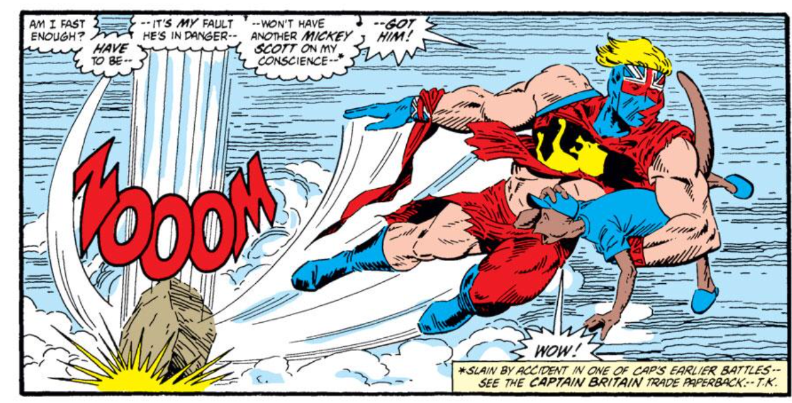 Kitty's Nazi counterpart is capable of disrupting the electricity within the human body, something I've always thought Kitty should be able to do as well. 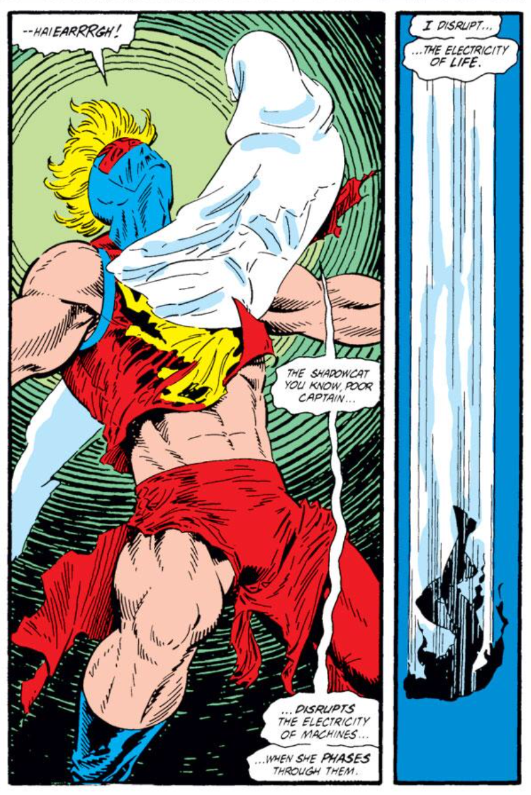 Rachel notes that she does not have a counterpart in the Lightning Squad.

Kitty's counterpart turns out to be a demon transformed by the Reich, something which horrifies Kitty. It's also made clear that the Nazi regime of this alternate dimension maintains its bigotry towards Jews, even while it elevates mutants. 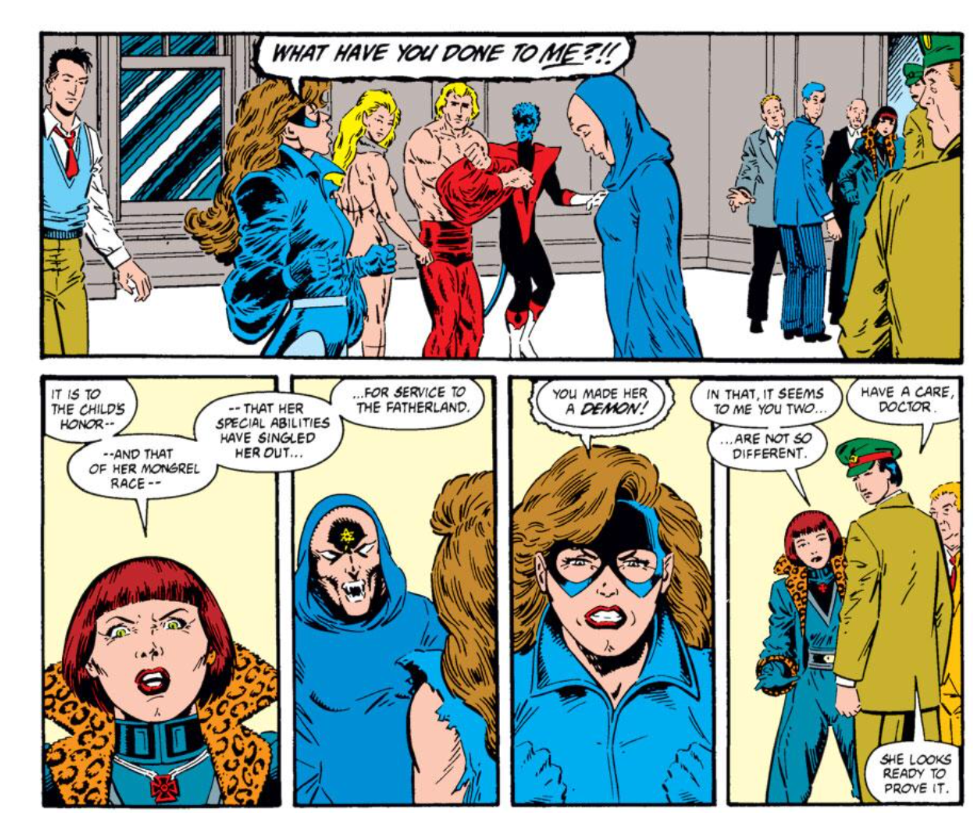 Young Love
A new love triangle seemingly kicks off this issue, as Kitty meets Alistair Stuart of WHO and thinks that he's beautiful. 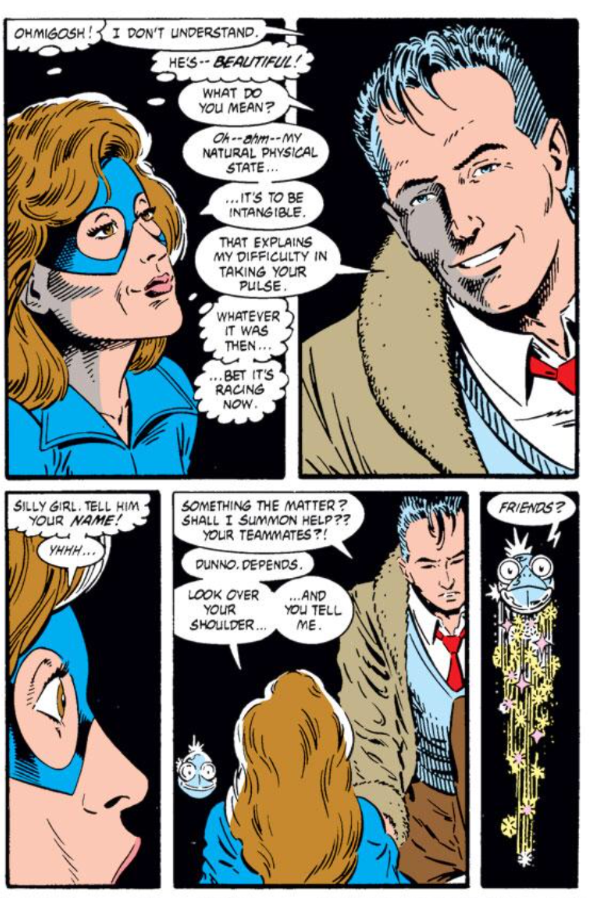 But later, Alistair meets Phoenix, and is immediately smitten with her in turn.

Teebore's Take
Story-wise, this issue wraps up the "Excalibur vs. Nazi Excalibur" confrontation, giving Captain Britain a chance to do the whole "over-matched but unwilling to give up" thing and Meggan a chance to be sneaky and save the day. The status of "our" Moira and Callisto, lost in the Nazi world, brings about an interesting resolution, as WHO and the British authorities are forced to hammer out an agreement with Nazi Moira in order to get everyone home safely, something that doesn't sit right with Excalibur but illustrates a little-depicted reality of superheroing (what happens after the fight and the bad guys have all been knocked out)

But all that gets mostly overshadowed by the art, which, in the absence of Alan Davis, simply isn't up to snuff. It's readable, but that's about the best that can be said about it, with stilted figures, mundane page layouts and a general lack of energy, especially when compared to Davis' usual work. Rogers and Austin's work with Steve Englehart on Detective Comics is generally well-regarded (and much better than this). Not sure if this was a rush job, or just a case of changing styles over time, but the art is a definite letdown that mars the conclusion to what was otherwise a fun little story about Excalibur fighting their Nazi counterparts.