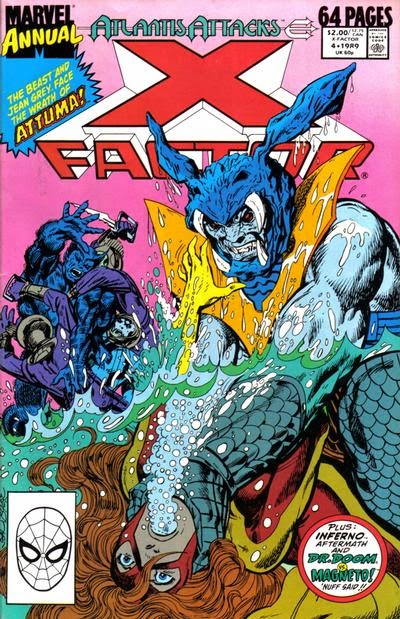 In a Nutshell
Beast and Marvel Girl battle Attuma

Plot
Pulled by a tractor beam cast by Ghaur, Beast grabs onto a flying, comatose Marvel Girl. Desperate to break the pull of the beam, he manages to get through to Jean enough for her to use her telekinesis to free them and send the two teammates crashing into the ocean, much to a watching Ghaur's dismay. In the water, Beast and the still-comatose Marvel Girl are attacked by an Atlantean force led by the warlord Attuma. Recognizing Marvel Girl as Phoenix, he claims her as his own and orders his troops to kill Beast. However, Beast is saved by the arrival of Attuma's daughter, Andromeda, and her rebel forces, and they agree to work together to thwart Attuma and rescue Jean. 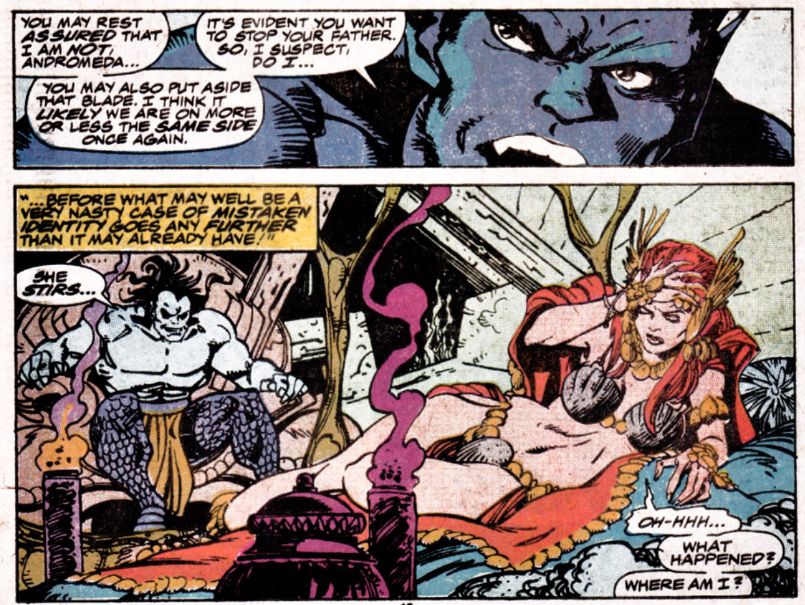 At a nearby undersea grotto, Attuma greets the awakening Marvel Girl, who insists she has no memory of Phoenix's past encounter with the warlord. She attacks him, but he smashes the walls of the grotto, bringing the ocean crashing inside. Beast and Andromeda arrive, with Andromeda challenging her father to single-combat as Beast brings the unconscious Marvel Girl to the surface. Reaching shore, he attempts to revive with her via artificial respiration, but is unable to do so. Just then, Ghaur appears, telling Beast he needs Jean alive and can save her life, in exchange for Beast willingly allowing Ghaur to take her. Accepting that at least with Ghaur, she'll be alive, Beast reluctantly lets the Deviant have Marvel Girl. Below, Attuma defeats his daughter, but before he can render the killing blow, Ghaur claims her as well, transporting her away to serve Set, much to Attuma's rage.

Firsts and Other Notables
Continuing "Atlantis Attacks", this issue focuses on Ghaur's efforts to acquire Marvel Girl, one of his intended "Seven Brides of Set", a group of female superheroes meant to serve as the mothers of the serpent god's children (Storm is also captured to be one of the brides).

Andromeda, the daughter of Atlantean warlord Attuma, appears in this issue, having for a short-time been a member of the New Defenders alongside Beast, where she seemingly perished (she was later resurrected along with other fallen Defenders by Dr. Strange). During "Atlantis Attacks" she's leading a rebellion against her father and ends up becoming one of the Brides of Set as well. 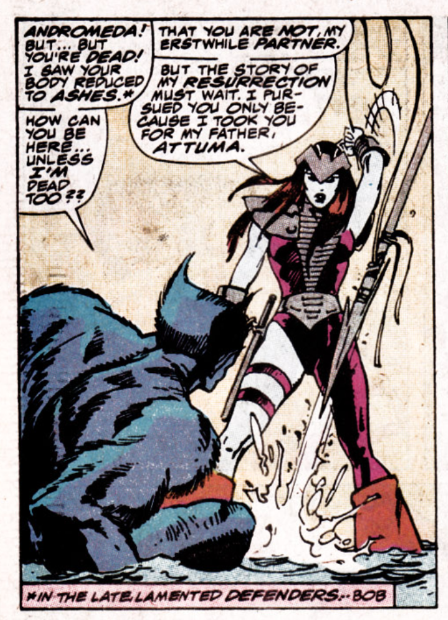 The second story in this annual, written and drawn by John Byrne, is set after the events of X-Men vs. Avengers, and features Magneto (then still Headmaster of Xavier's School) and Dr. Doom using the technology Magneto acquired in that limited series to basically fight over who has the most tragic backstory.

The third story is a more overtly humorous one in which a pair of FBI agents with more than a passing resemblance to the Blues Brothers investigate the events of "Inferno" to determine it's true cause. Set between X-Factor #39 and #40 (just before Madelyne's funeral, in fact), it shows X-Factor debating whether or not to reveal the truth about "Inferno". They ultimately decide to keep the truth to themselves for the public's good, and tell the FBI that the events of "Inferno" were halluncinations caused by a Hypno-ray created by AIM which they helped destroy. 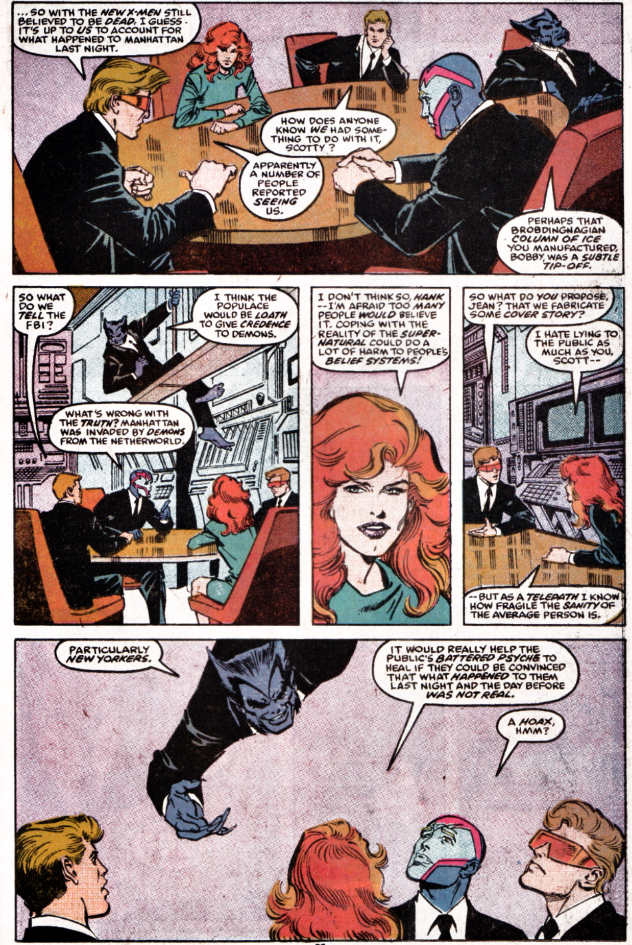 M-Squad also makes a brief appearance in that story, bridging their seeming deaths in New York during Uncanny X-Men #240 with their appearance on the West Coast in issue #244. They say that during "Inferno" they hallucinated being absorbed into the Empire State's Bulding's wallpaper, but when they event ended, they just woke up to find themselves in the elevator. 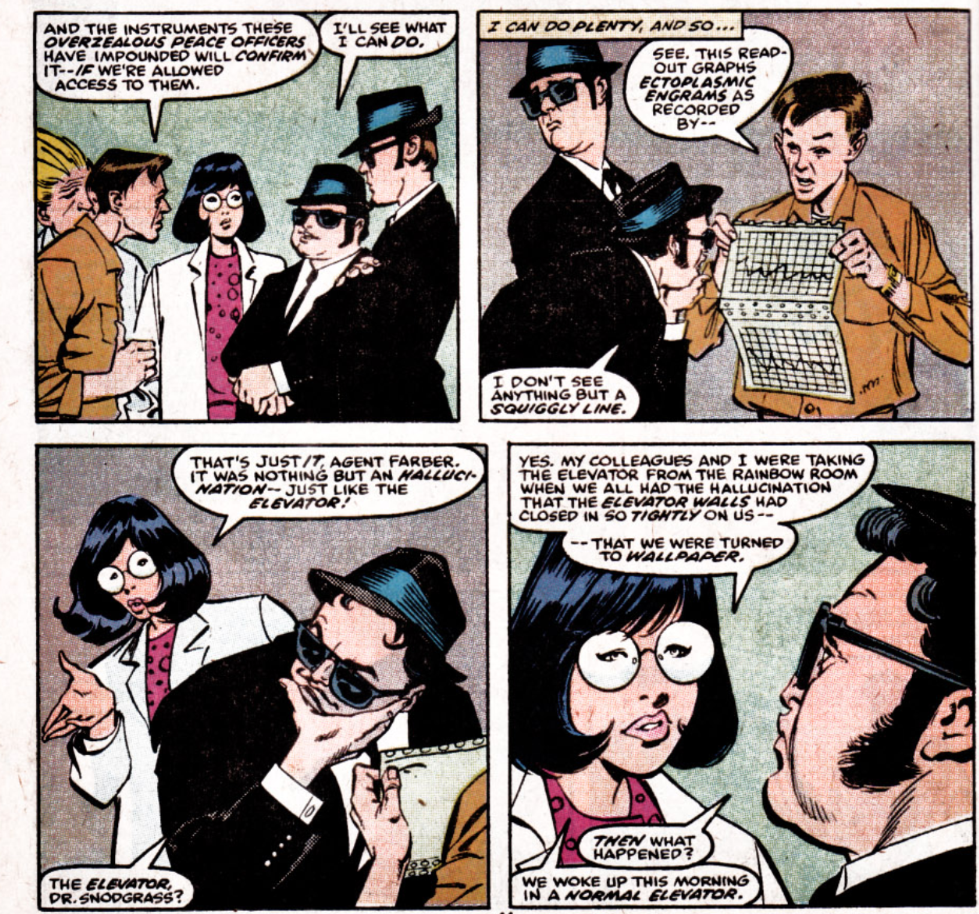 The final story in this annual, as with all previous "Atlantis Attacks" annuals, continues the telling of the Serpent Crown's origin.

There's also a pin-up by Jon Bogdanove featuring X-Factor, the newly combined New Mutants, and Power Pack (and even here, Rusty and Skids are separate from the rest of the New Mutants). 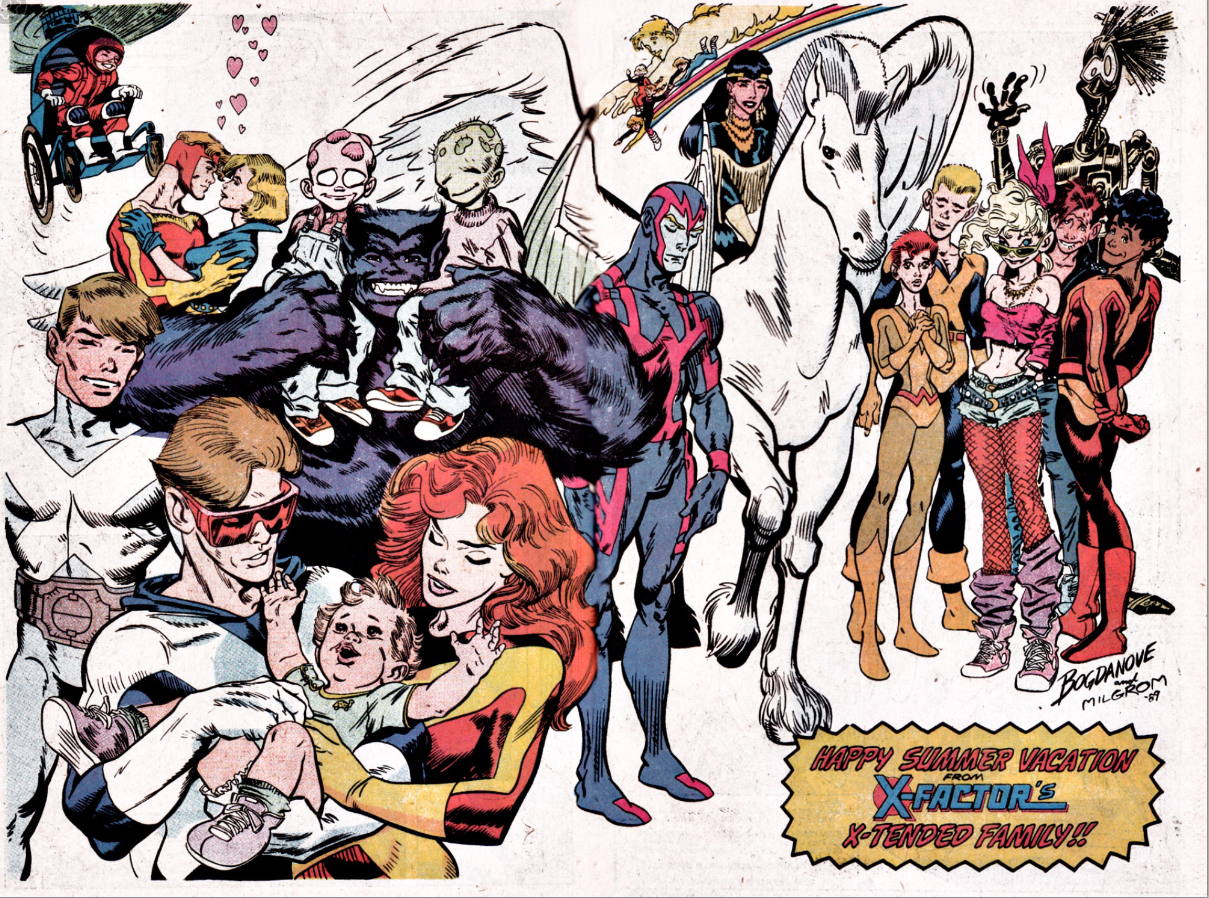 A footnote in the early pages of this issue says that a future issue of X-Factor will show Marvel Girl getting grabbed by Ghaur's tractor beam and Beast grabbing onto her; that scene never actually does appear in a future issue. 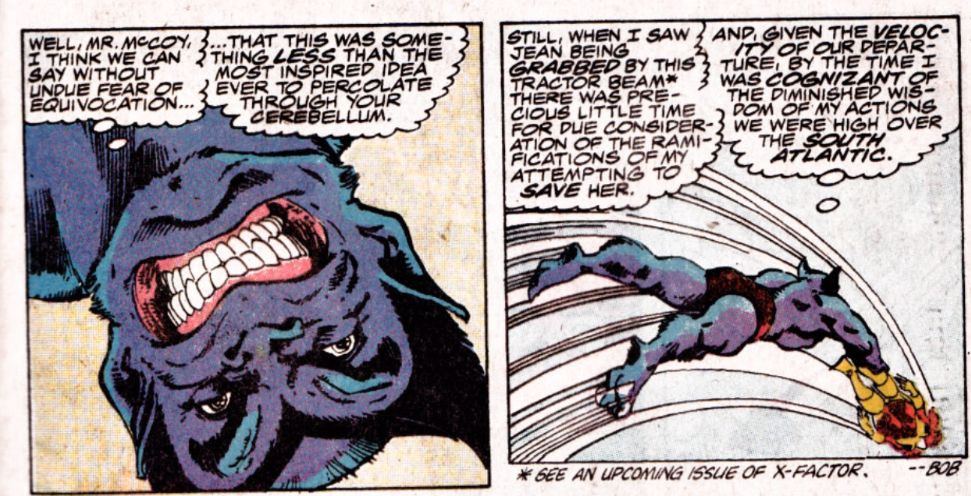 Attuma references an encounter with Phoenix which ocurred in Bizarre Adventures #27 (which, once again, I really should have written a post about back in the day), in which he captured Phoenix and her sister for some sort of creepy breeding attempt. 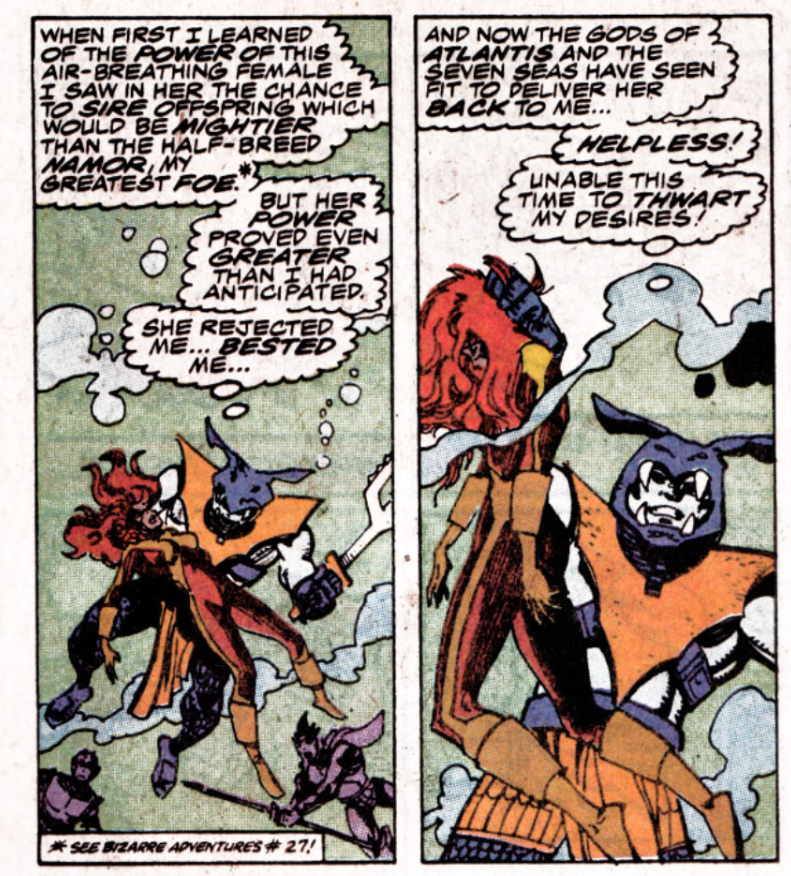 The Chronology Corner
Beast and Marvel Girl, the only two members of X-Factor to appear in the main story (as well as some of the remaining "Atlantis Attacks" annuals), do so between issues #42 and #43 of X-Factor.

A Work in Progress
Beast, who believes "once a telepath, always a telepath", manages to mentally shout loud enough to break through Marvel Girl's trance enough to get her to drop them in the ocean before they reach Ghaur. 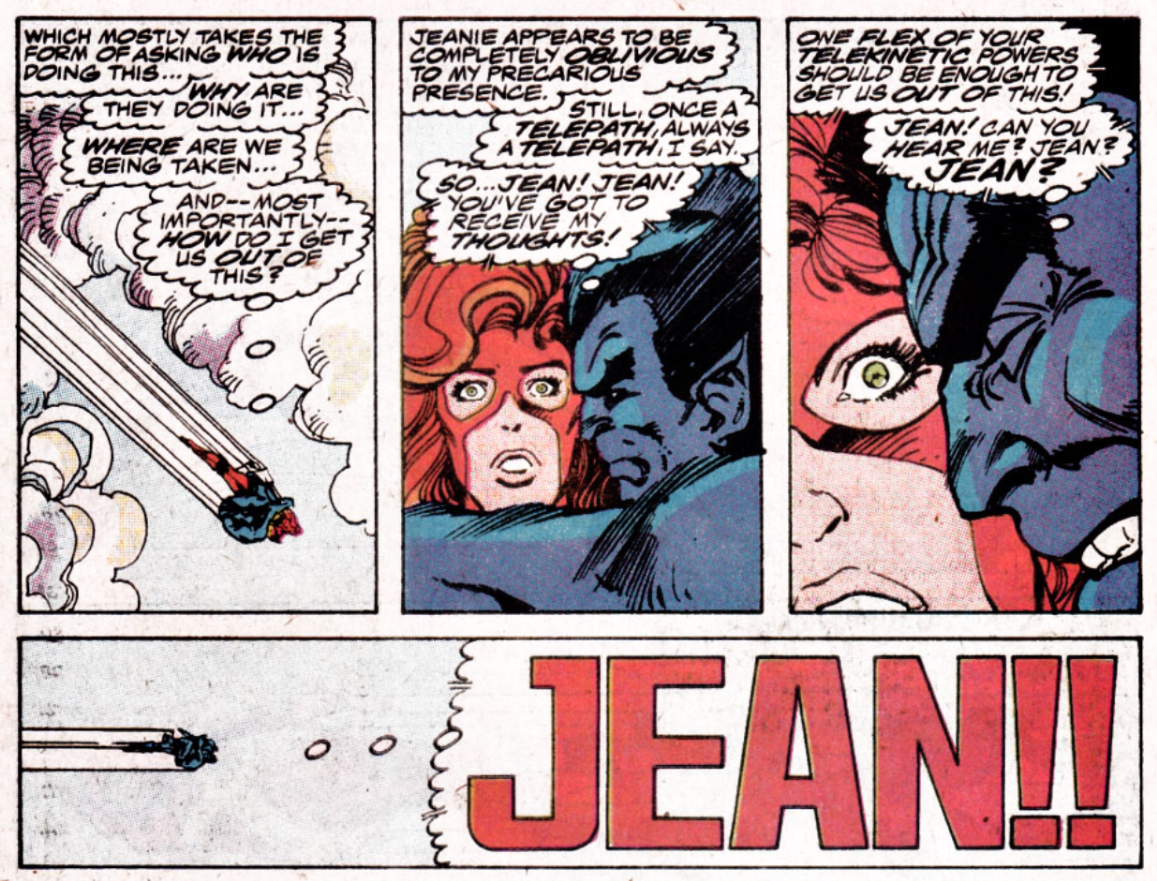 Beast notes that his lungs are capable of holding more air, a similar line of thinking to Sunspot's super-strength allowing him to hold his breath longer from New Mutants Annual #5. 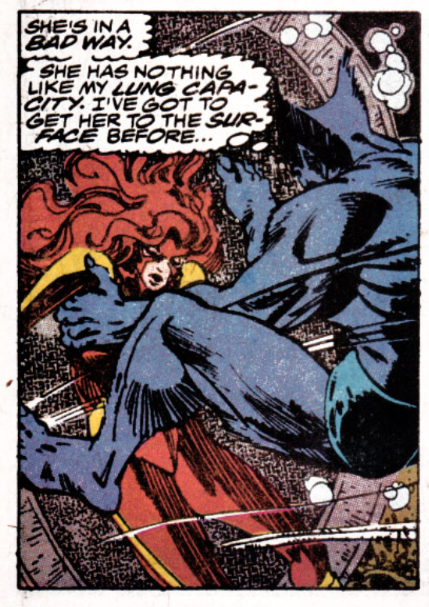 Marvel Girl says she doesn't remember Phoenix's encounter with Attuma because she wasn't Phoenix, except that, as of "Inferno", Jean possesses all of Phoenix's memories, a detail that John Byrne likely didn't know or chose to ignore. 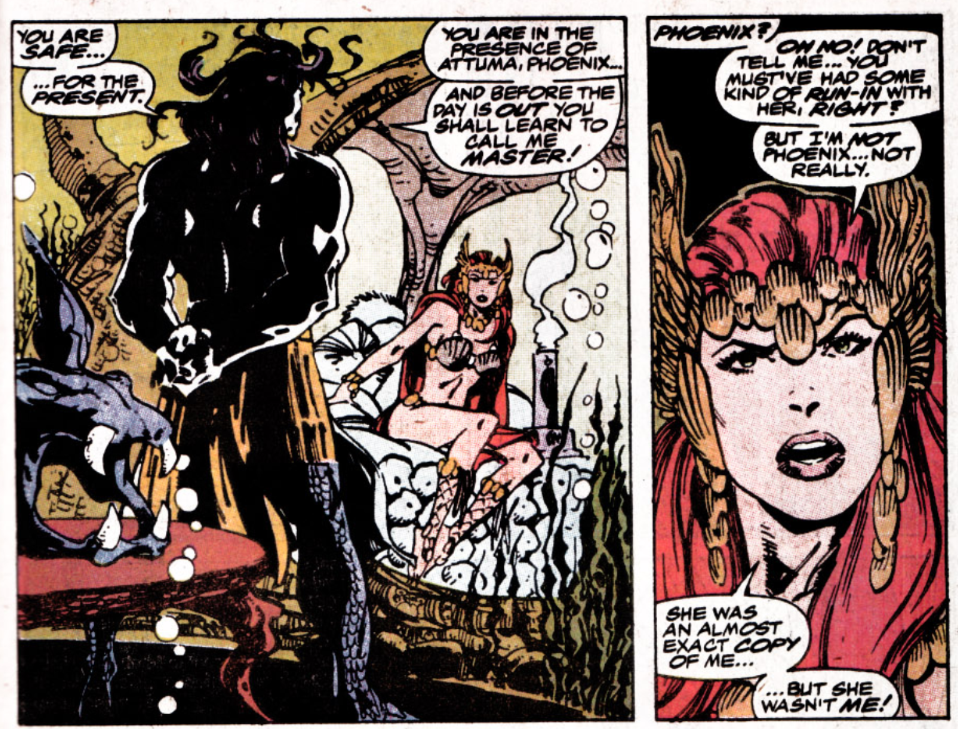 Both Marvel Girl and Beast (but especially Marvel Girl) spend a lot of time in this issue underwater and unconscious. While Beast's inability to resuscitate Marvel Girl is a plot point, it still feels like, realistically, they probably would have died without question.

When giving Marvel Girl mouth-to-mouth, Beast notes he has to be careful not to burst her lungs with the force of his breathing.

I Love the 80s
A caption in the second story refers to Dr. Doom as the last absolutely monarch in the world; I'm not sure that would even be true today, let alone in the Marvel Universe of 1989.

Teebore's Take
Not that it's a high bar to clear, but this is easily the best of the X-Books' "Atlantis Attacks" annuals. Story-wise, this isn't a whole lot different/better than the previous "Atlantis" annuals: there's the usual amount of underwater fighting that makes the part of my brain that knows physics throw up its hands and leave the building, and Marvel Girl spends most of the issue unconscious and/or an object to be fought and bartered over, which is unfortunate.

But the art is really nice, unquestionably the best art of the three annuals, as Walt Simonson provides some scratchy, gritty inks to John Byrne's pencils, the end result being a pleasing and effective combination. The two non-historical backup stories are mostly non-essential but enjoyable enough, the kind of value-added material the late 80s/early 90s annuals strove for but so rarely achieved. Even though the end result is the best of the "Atlantis Attacks" annuals we've looked at, I'm nevertheless glad to be done with this particular storyline.