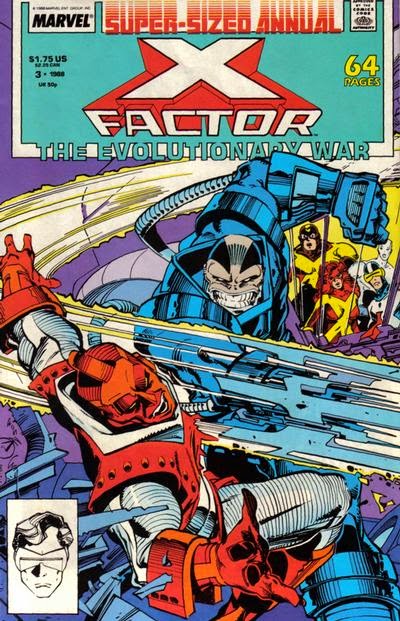 In a Nutshell
X-Factor battles the High Evolutionary's Purifiers.

Plot
Far underground, the High Evolutionary's Purifiers attack the subterranean races living beneath the surface, ordered to destroy them all because the High Evolutionary has deemed them a genetic dead-end. One of the Moloids, however, possesses psychic abilities, and his cry of distress during the attack reaches psychics all over the globe, including Marvel Girl. Meanwhile, Apocalypse, alerted to the attack by Caliban, decides to visit the High Evolutionary. X-Factor descends into the tunnels, determined to answer the cry for help. They encounter the telepathic Moloid and manage to subdue him, learning of the Purifiers' attack. Elsewhere, Apocalypse teleports himself to the High Evolutionary's orbital base, and the two debate their respective philosophies before coming to blows. 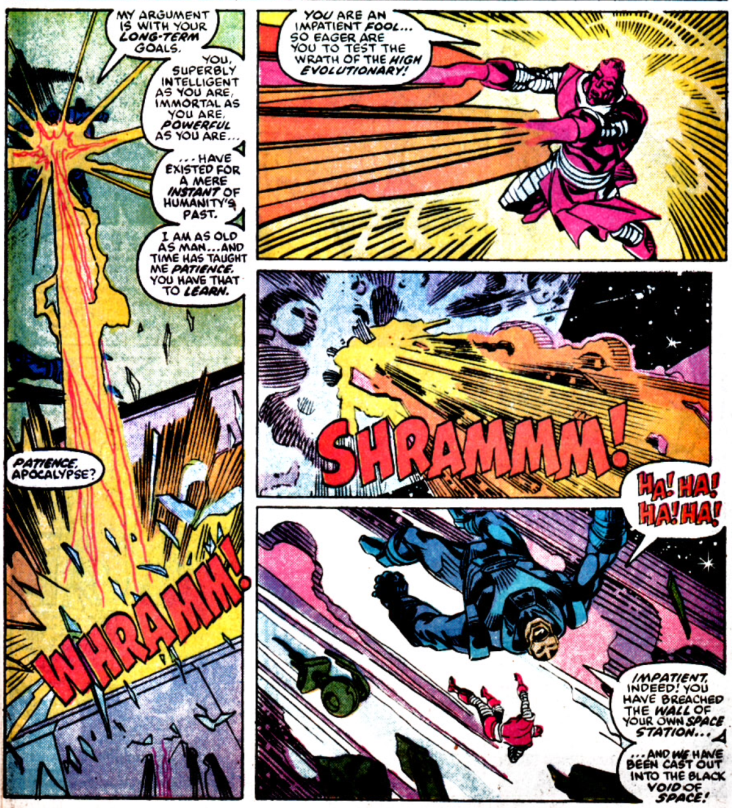 In order to prove the High Evolutionary's methods are wrong, he teleports them both to the underground caverns to watch as X-Factor battles the Purifiers. Inspired by X-Factor, the telepathic Moloid is able to rally the other Moloids and overwhelm the Purifiers, causing the High Evolutionary to realize he is wrong, that the Subterraneans just needed a push to realize their potential. Apocalypse departs, having proven his point and realized that the High Evolutionary furthers Apocalypse's agenda. The High Evolutionary teleports away with his remaining Purifiers, determined to continue his quest to genetically enhance humanity. In the wake of the battle, X-Factor offers to take in the telepathic Moloid for training, but he declines, saying he belongs with his people, but thanking them for their help.

2nd Story "Changes!"
Aboard Ship, the X-Factor kids play a game of tag, discussing their impending move to boarding school, before running into Beast, who is carrying some old photo albums salvaged from the wreckage of X-Factor's old headquarters. Together, the kids and Beast look through the pictures, noting the changes in X-Factor between their days as X-Men and now. Realizing that change can be good as well as bad, they decide that maybe being sent to boarding school won't be so bad after all. Maybe.

Firsts and Other Notables
This is the first part of "The Evolutionary War", a crossover of sorts running through most all of Marvel's 1988 annuals. It represents the first time Marvel, presumably in an attempt to boost sales on the annuals, set a crossover entirely in the annuals, a practice that would be repeated the following year in "Atlantis Attacks" and by DC as well (with "Armageddon 2001"), before adopting a practice in subsequent annuals of telling connected stories across a smaller group of annuals.

The High Evolutionary is a long-time Marvel villain, first appearing in Thor during the 60s, with ties to several characters (including Spider-Woman, Quicksilver and Scarlet Witch). Once a normal scientist studying genetics in the 1930s, the High Evolutionary conducted various experiments on himself that evolved his intelligence upwards to the limit of human potential. He wears a sophisticated exoskeleton that provides life support, heals his wound and increases his strength. Traditionally headquartered out of Wundagore Mountain, the High Evolutionary is also responsible for the creation of the New Men (animals evolved to possess human intelligence) and Counter-Earth (a replica of Earth on the opposite side of the sun where the High Evolutionary carries out genetic experiments), and he is considered the foremost expert on genetics in the Marvel Universe.

Throughout the crossover, the High Evolutionary employs a group of henchmen known as the Purifiers (not to be confused with the followers of Reverend Stryker from "God Loves, Man Kills", who go by the same name), led by Dr. Stack and Major Purge, all of whom make their first appearance in this issue.

As suggested by the cover, Apocalypse battles the High Evolutionary in this issue. Bringing the two together makes sense, given their shared interest in genetics and evolution, but Apocalypse's reasons for picking a fight with the High Evolutionary are never made clear, and by the end of the issue, he basically calls a truce, saying their goals are ultimately the same. 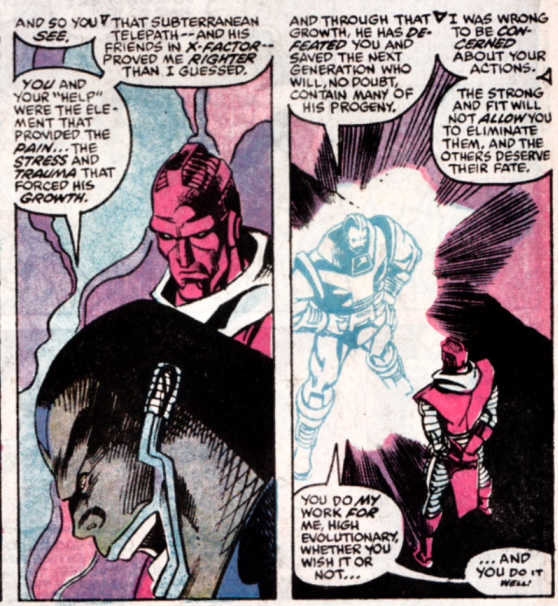 This is the first annual (that we're examining) which is more than just a longer story featuring the main characters; as such, in addition to the main story, it includes two back-up stories and some ancillary material.

The first backup story stars the X-Factor kids, and introduces the idea that they'll soon be sent to boarding school, which is where the upcoming X-Terminators miniseries will begin (that miniseries is also plugged on the final page of the story). 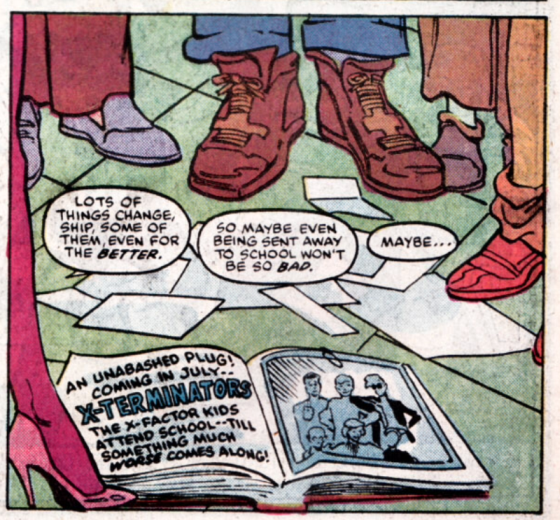 The second backup story is the first part of an eleven part story running in all the "Evolutionary War" annuals detailing the history of the High Evolutionary, written by Marvel continuity guru Mark Gruenwald. 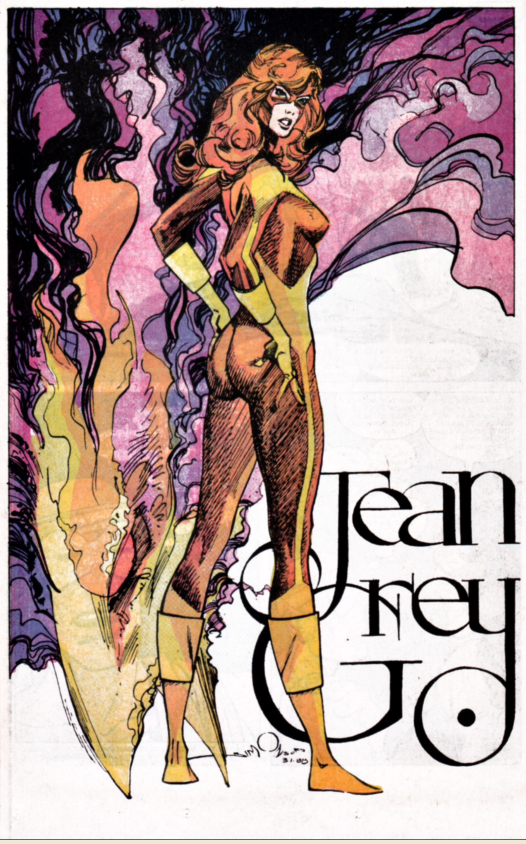 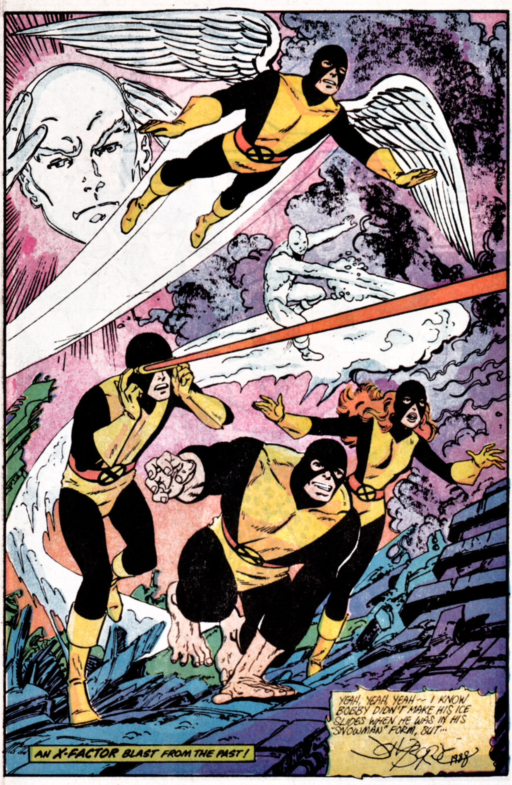 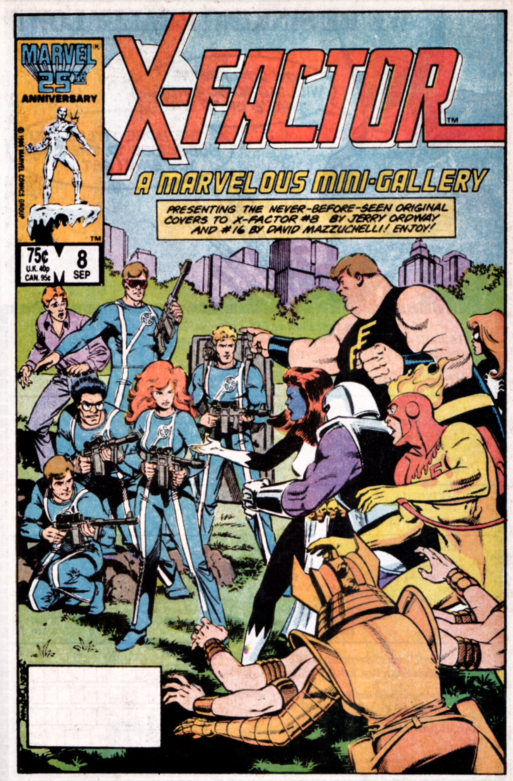 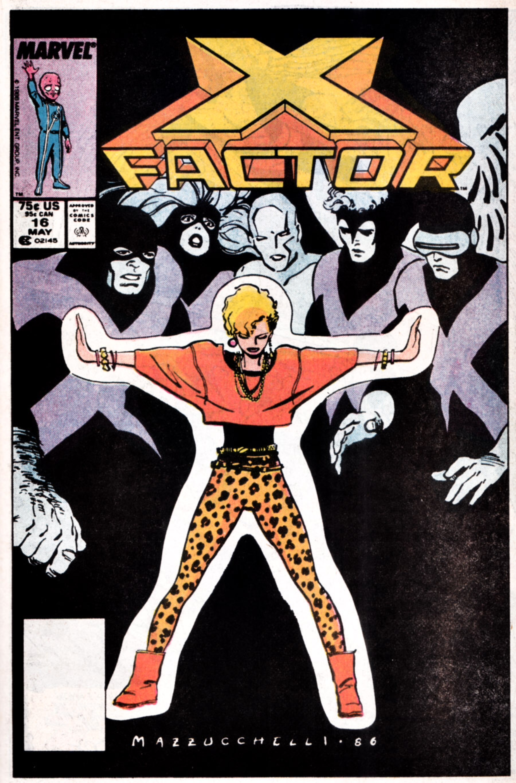 The Chronology Corner
This story takes place between X-Factor #29 and #30.

A Work in Progress
The Purifiers attack triggers a telepathic cry heard by Earth's various psychics, including Psylocke and Phoenix. 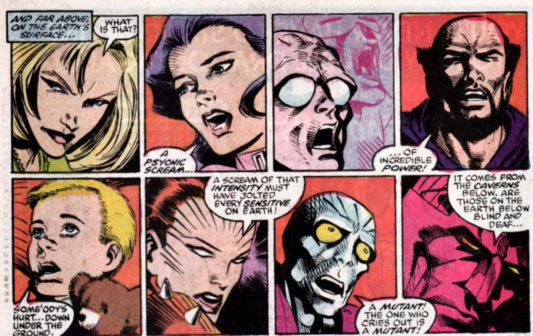 Marvel Girl experiences the cry as well, calling it her first telepathic contact since her resurrection. 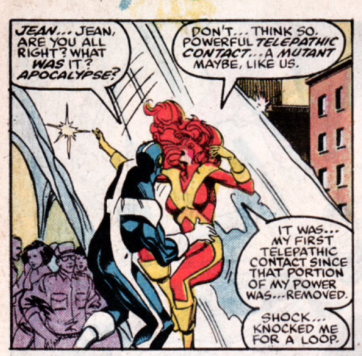 At the time that Marvel Girl hears the telepathic cry, X-Factor is working to repair the Empire State Building, damaged during "Fall of the Mutants". 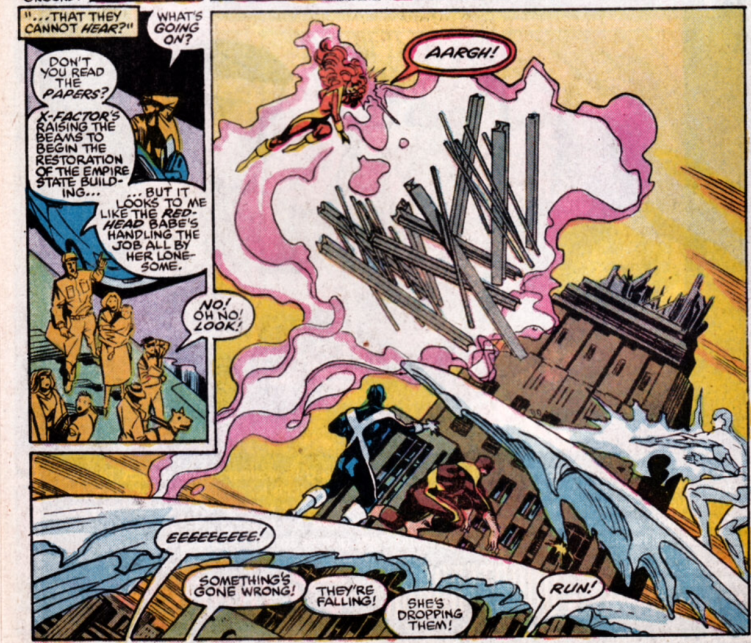 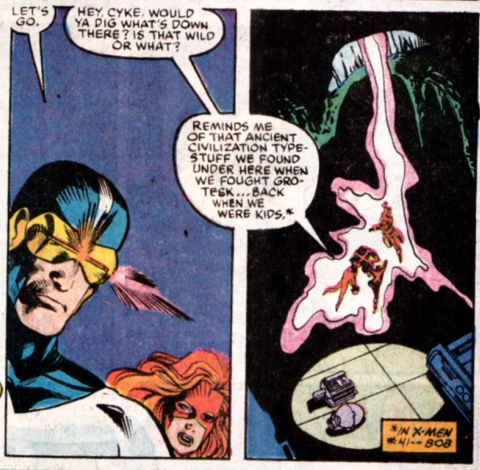 Marvel Girl notes that though she lacks telepathy, she remains psi-sensitive. 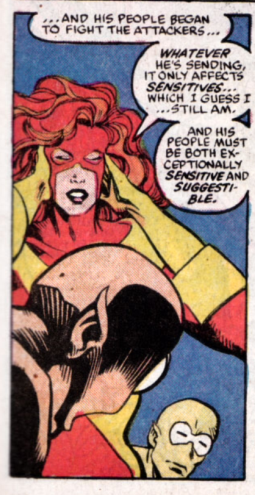 I Love the 80s
While it's made clear how both Apocalypse and the High Evolutionary are capable of surviving the vacuum of space, it's never made clear how they're able to continue to have a conversation out there.

Teebore's Take
Confession: I've never read the entirety of "The Evolutionary War". I've read probably more than half of it, across the annuals of series I otherwise read (the X-Books, the Avengers books, etc.). In general, I enjoy those stories on their own far more than the subsequent "Atlantis Attacks" crossover (which I also haven't read in its entirety), but I can't really speak to how well, say, this issue fits into the overall arc of the story.

As an X-Factor annual, it's of a piece of the previous two annuals: fine, but unexciting, and hardly essential. Part of that comes from the presence of Terry Shoemaker on art, a perennial fill-in artist around this time whose name would fill me with disappointment whenever I'd open an issue as a kid and see him listed as penciler, a sentiment that remains as an adult. His work is perfectly serviceable but largely unexciting, especially compared to the likes of Silvestri, Simonson and even Blevins. Part of the malaise in this issue also comes from the presence of the Moloids, which brings back not-fond memories of the Silver Age X-Men's repeated tussles with subterranean races during the Original 66 run.

Beyond the main story, we've got an enjoyable enough backup story starring the X-Factor kids that serves as a primer on the book's main characters, the kind of thing these annual back-up stories like to do, along with a few pin-ups and alternate covers that at least help the entire package feel worth your while even if no individual component stands out. But while the whole may be better than the parts, it's still hard to get too excited about any of this.

Next Issue
Tomorrow, "The Evolutionary War" continues in New Mutants Annual #4, as Dani gains a new power. Next week, we get back to the Brood in Uncanny X-Men #232.
Newer Post Older Post Home
Posted by Austin Gorton at 12:00 PM