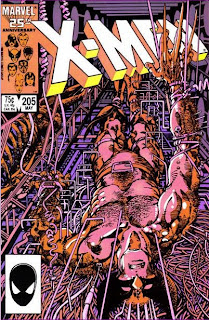 Plot
In her Body Shop, the sorceress Spiral completes her latest transformation: that of Lady Deathstrike. Along with the former Hellfire Club soldiers Cole, Macon and Reese, Deathstrike, now equipped with cybernetic enhancements and claws of her own, departs to hunt down Wolverine. Later, Katie Power is in New York City singing Christmas carols with her class. In the midst of a worsening snow storm, Cole suddenly emerges, firing wildly and separating Katie from her teacher. Moments later, she stumbles into a badly-injured, near-bestial Wolverine. Though frightened, Katie quickly realizes Wolverine needs help, and does her best to get him away from his foes. The time she buys him enables Wolverine to heal enough to regain his senses. He thanks her for her help, then asks her to do maybe the hardest and bravest thing she's ever done: trust him.

As Deathstrike and the soldiers close in, Wolverine fights back, quickly dispatching Cole, Macon and Reese, leaving only Lady Deathstrike. They fight ferociously, with Wolverine eventually gaining the upper hand. Seeing the full extent of what she's done to herself, all in the name of wrongly-directed vengeance, angers and saddens him. Deathstrike begs for the mercy of death, but Wolverine refuses to kill her, saying if she wants mercy, she must earn it. The storm breaking, he returns to where Katie has remained hidden, and she swears she did as he asked, and didn't see or hear any of his fight. Katie admits that she's still a little scared of him, but Wolverine promises she'll always have a friend in him. As they leave to take Katie home, she tells him that he'll always have a friend in her as well.

Firsts and Other Notables
Lady Deathstrike, last seen menacing Wolverine with a fancy sword and a gaggle of ninjas in Alpha Flight #34, receives cybernetic implants in the opening pages of this issue, along with a set of claws (one for each finger) that rival Wolverine's. This cyborg look will become her default look moving forward, as she rises to prominence as not just a recurring Wolverine antagonist but an X-Men villain as well.

Cole, Macon and Reese, the three Hellfire Club soldiers who Wolverine apparently slew in X-Men #133 before turning up as cyborgs in issue #151, also get cybernetic upgrades in this issue, and team-up with Deathstrike to take down Wolverine, beginning a partnership that will carry over into their association with the Reavers. 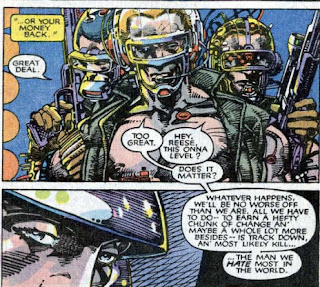 Spiral, last seen as part of Freedom Force in issue #199, is responsible for providing these cybernetic upgrades, as Claremont begins to expand the character beyond her role as Mojo's chief henchmen in the Longshot mini, establishing a penchant for striking Faustian bargains and skills at reshaping bodies and minds through a combination of magic and interdimensional science. Accordingly, her Body Shop (later Shoppe), the variably-located setting of her work, appears for the first time in this issue.

Katie Power, the youngest member of Power Pack, guest stars, appearing between issues #21 and #22 of her series.

This issue opens in media res, with Spiral completing her work on Deathstrike, having already upgraded the others, with no mention or footnote to her earlier appearance in Daredevil or Alpha Flight. The story then jumps even further ahead, starting with Katie finding a near-bestial Wolverine in New York after he's already been attacked, captured, and escaped, with no indication of how he ended up in New York while the rest of the X-Men are still in San Fransisco.

This is the third collaboration between Claremont and Barry Windsor-Smith, following issues #186 and #198, and their first story to not center on Storm.

It's Statement of Ownership time again, and the sales continue to climb, rocketing towards the half million mark, with the average number of copies of each issue sold per month in the previous year reported at  449,870, with the single issue nearest to the filing date selling 474,412 copies, up from last year's totals of ~378,000 and ~387,000 (as a point of comparison, the best selling comic in July 2013 (Superman Unchained #2, sold just under 166,000 copies according to Diamond Comics Distributor, with the highest selling X-Men book, All New X-Men #14 (ranking 11th in sales for the month), selling just under 75,000 copies).

The Chronology Corner
Just prior to this issue, Wolverine appeared in Captain American Annual #8, which, while not technically the first meeting of those characters, in terms of both publishing and character history, still represents one of the first significant interactions between them, and as a result was a much sought after back issue in the 90s, when every major Wolverine appearance commanded top dollar. Nothing of much significance happens in the issue, Wolverine or X-Men related (certainly nothing to help set up Wolverine's appearance in this issue), which is why its not getting its own post.

This issue takes place at Christmas, presumably the same Christmas as depicted in Power Pack #20, mucking up the New Mutants internal timeline even further. SpaceSquid, you once again have my sympathies.

Claremontisms
Lady Deathstrike "hoped -- prayed -- knew" her confrontation with Wolverine would come down to her and him.

The Best There is at What He Does
In a moment that falls on the right side of "much too twee", Katie offers a wounded Wolverine her coat for protection against the weather. 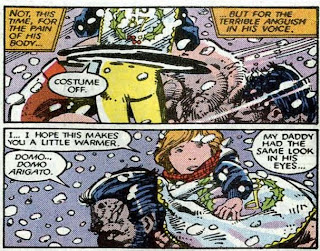 Wolverine notes that Katie bought him time for his healing factor to repair his mind and restore some semblance of rational thought, the first indication that his power affects his mind as well as his body. 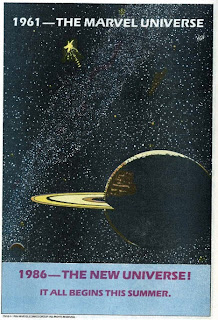 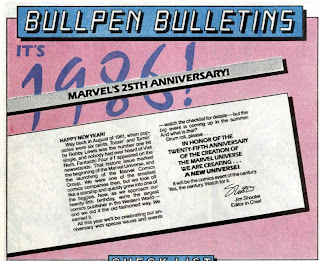 It's in the Mail
The letters page is back, discussing issue #193. One writer offers up a No-Prize explanation for the conflicting depictions of Storm's mother.

It also mentions that inker Dan Green, absent since issue #200, will return next month after taking a break from the book to paint a Dr. Strange graphic novel by J.M DeMatteis.

Teebore's Take
Though somewhat maddening, in terms of being a chapter in a larger narrative, what with the way it drops the reader into the middle of the story and features a pair of characters in Spiral and Lady Deathstrike that, at the time time, were largely unknown to all but the most diehard readers, with little introduction to them or any helpful footnotes (and certainly, this aspect of the issue bothered me as a kid, constantly making me feel like I was missing an issue somewhere), taken on its own merits, this is easily my favorite of all the Claremont/Windsor-Smith collaborations. Part of that is because, even at this point in his history, Wolverine is still a far more interesting character than even depowered Storm, and hasn't yet reached the tipping point of exposure where a Wolverine solo story has lost all novelty.

Part of it is also that Windsor-Smith is given the opportunity to draw some more traditional comic book action than the fallout to Storm's depowering or her African odyssey, and he rises to the occasion, turning in pages of atmospheric, highly-detailed, dynamic art, with the Wolverine/Lady Deathstrike confrontation in particular a standout, as he takes a cue from Frank Miller in the original Wolverine limited series and Paul Smith in his follow-up issues of Uncanny to depict their battle in a series of long, mostly silent panels.

Furthermore, while the idea of pairing the edgy, animalistic Wolverine with a far more naive and innocent character dates all the way back to Kitty Pryde's earliest appearances, this issue is one of the best "Wolverine/innocent girl" pairings, as the juxtaposition between the characters is heightened by just how young Katie Power is, and how apart, despite her superhuman abilities, she is from the world of Wolverine and the X-Men (making this issue also one of the best uses of X-Men's occasional dalliances in this era with Power Pack). Wolverine's desire to not only protect her physically, but protect her from the harsh realities he embodies, makes the proceedings far more compelling than the average "Wolverine fights to retain his humanity" stories (and, in the future, we'll get a lot of those), even the really well-drawn ones.

Next Issue
Tomorrow, Magneto takes on the Avengers in New Mutants #40, and Friday, I dunno, Scott probably does something dickish in X-Factor #4, while next week, we take a look at the Firestar miniseries.
Newer Post Older Post Home
Posted by Austin Gorton at 12:00 PM