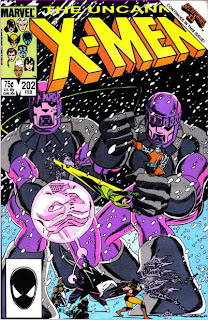 In a Nutshell
The X-Men fight Sentinels in San Fransisco.

Plot
Entering Rachel's room, Rogue triggers a holographic recording from Rachel explaining that she's realized the Beyonder is a threat to everything that exists, and has left to kill him once and for all. Rogue awakens the rest of the X-Men, and Magneto is able to use Cerebro to track Rachel to San Fransisco. Rachel confronts the Beyonder on Alcatraz, but despite all her power, she is unable to faze him. The Beyonder takes her on a journey through her past, taking them into the future she hails from, showing her that her fear and rage come from her failure to save her friends in the future. He then gives her a measure of his power and offers her a choice: she may use it to destroy him, or to save her friends, whom he has transported to San Fransisco and beset by Sentinels from Rachel's future.

The X-Men barely hold their own against the robots until Rachel intervenes. Working together, and with the help of Rachel's augmented power, the team is able to ultimately destroy the Sentinels. Rachel returns to the Beyonder, furious, and he explains that he orchestrated the situation in order to help her expunge her guilt so that she could become one with herself, as he hopes to do. Rachel angrily explains that it's not that easy, that such changes must be earned, and that for all his good intentions, all he's ever done is harm.

Firsts and Other Notables
This another Secret Wars II crossover, once again occurring at a time when the Beyonder is in his "help other people achieve their purpose and be happy" phase, thus leading to him granting Rachel a measure of his power. The Beyonder appears here between Amazing Spider-Man #273 and New Defenders #152 (the final issue of that series, cancelled in part to allow Beast, Angel and Iceman to appear in X-Factor).

The Beyonder transporting the X-Men to San Fransisco (he's there when he's confronted by Rachel, then proceeds to bring the rest of the team), marks the beginning of the X-Men's continued association with that city (they'll hang out there for the next several issues, then return periodically through the years, most notably during the Utopia era of the series that began a few years ago).

Magneto fights alongside the X-Men in this issue, one of the rare occasions he actually does so within the pages of Uncanny X-Men (for all the hubbub about Magneto joining the X-Men, he ultimately ends up fighting alongside them very rarely, for a variety of a reasons, his presence as a reformed villain instead playing more of a regular role in New Mutants).

Nightcrawler is left behind when the X-Men are teleported to San Fransisco. Though the Beyonder's reasons for doing so will never be made clear, Nightcrawler's reaction to being left behind will be dealt with in issue #204.

While showing Rachel her past in this issue, it's noted that the Kitty Pryde from Rachel's timeline dies shortly after she sends Rachel back in time; future issues of Excalibur will reveal that though badly injured, she survived the attack by Nimrod, and will eventually be merged with Sentinel parts to become Widget.

The corner box has been updated the reflect the new makeup of the team. Also, the price of the comic goes up ten cents as of this issue, to seventy-five cents an issue.

The Chronology Corner
Following this issue, the X-Men and New Mutants appear in Secret Wars II #8, in which each team, at different times, rather stupidly and pointlessly attack the Beyonder, rendered in the same bland style we've come to expect from Secret Wars II. That's about it.

A Work in Progress
The X-Men have a holoprojector capable of recording and playing a holographic message, presumably something they acquired from the Shi'ar.

It's noted that since Magneto monkeyed with the Earth's EM field in order to prohibit long range telepathic contact (as noted in issues #149-150), Cerebro hasn't been as effective, which could be taken as an in-universe explanation for why the X-Men haven't detected/sought out many new mutants in a while (really, since New Mutants launched, and it isn't like Xavier used Cerebro to find any of them).

Chased by a Sentinel, Storm wonders how their sensors read her, still as a mutant, a human or something else. 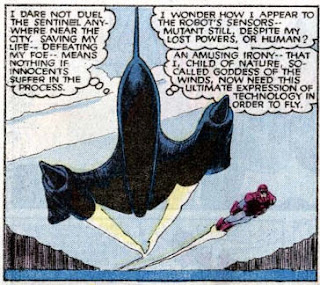 The Sentinels from Rachel's future refer to Kitty as Ariel rather than Shadowcat, further suggesting her experiences in Kitty Pryde & Wolverine never occurred in Rachel's timeline.

I Love the 80s
During the X-Men's battle with Sentinels in San Fransisco, one of the bystanders once again wonders if George Lucas is in the neighborhood filming.

Claremontisms
Storms note that "the responsibility -- and blame" for Rachel's actions are hers, another favorite Claremont sentence construction.

The X-Men's fight with the Sentinels in this issue contains some rather clever bits of power usage, from Storm launching the Blackbird into the upper atmosphere to dislodge a Sentinel, to Magneto creating a magnetic vortex to both safely bring the plane back to Earth and call down super cold air to freeze a Sentinel, to Colossus and Kitty combining their powers to phase a street lamp into a Sentinel, which Rachel then uses as a conduit to blast the robot.

The Best There is at What He Does
During the Sentinel fight, Rachel uses some of the power given to her by the Beyonder to supercharge Wolverine's healing factor, more or less amping it up to the level at which it functions in current stories. 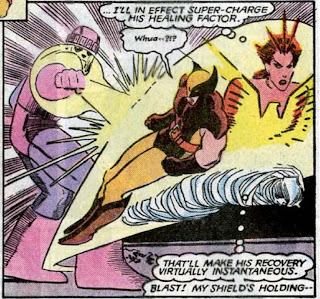 Human/Mutant Relations
After Rogue crashes into a crowd and accidentally starts absorbing peoples' memories, someone, realizing she's a mutant, cries out to "get her!" 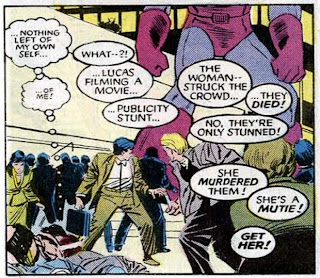 For Sale
This issue contains an ad for Challenge of the Gobots, the Gobots animated series. Despite my continued affection for the much-maligned Gobots, I must admit that, as slogans go, "They're Awesome!" < "More than Meets the Eye". 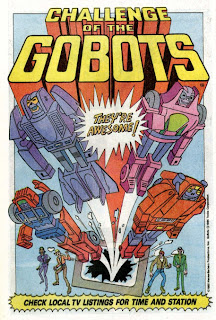 Teebore's Take
Secret Wars II is back, though once again, Claremont keeps the Beyonder on the back burner. After providing Rachel with a power boost (that will play a larger role in the next issue), the Beyonder largely disappears from the pages, and Claremont and Romita Jr. settle in for something of a palate cleansing, traditional slugfest issue, the likes of which the title hasn't seen in several months. The bulk of this issue is the X-Men (including, notably, Magneto, one of the few instances he'll be seen fighting alongside the X-Men proper) vs. Sentinels, a straightforward team vs. antagonist battle that we haven't really seen since issue #194.

Whereas similar efforts to use Secret Wars II to get "back to normal" in New Mutants #36 ended up feeling rehashed and uninspired, that gap in time helps this story feel more refreshing, helped along by Claremont once again showing off his penchant for clever power usage, while Al Williamson's inks mesh well with Romita's pencils and provide a grittiness that lends some tension to the X-Men's battle. Nothing here is groundbreaking, nor terribly significant to either Secret Wars II nor the larger X-Men narrative, but it's a fun and entertaining story in a classical vein nonetheless, one that effectively (and thankfully) manages to avoid the muck and mire that is most of Secret Wars II.

Next Issue
Tomorrow, the Beyonder wreaks havoc on the New Mutants in New Mutants #37, followed on Friday by the launch of X-Factor #1, and next week, we learn that neither Rachel nor the title is finished with the Beyonder yet in Uncanny X-Men #203.
Newer Post Older Post Home
Posted by Austin Gorton at 12:00 PM