Or the One Where
Mr. Burns tries to acquire his childhood teddy bear, Bobo, from Maggie.

The Setup
After Homer is violently thrown out of Mr. Burns' birthday party, Bart brings home a bag of ice containing Bobo, the very thing a depressed Burns is seeking, and gives the bear to Maggie.

Notable Notes
This episode loosely parodies the 1941 film Citizen Kane (in its depiction of a powerful and successful man secretly yearning for the lost innocence of childhood), with several bits lifted directly from the movie (including Smithers walking in on Burns as he drops a snow-globe).

This is the first episode executive produced by David Mirkin, who was the showrunner for seasons five and six.

This is the episode which contains the famous "64 slices of American cheese" routine, as Homer proceeds to eat an entire package of cheese, one slice at a time, as Burns and Smithers unknowingly cling to the ceiling above him, their attempt to steal Bobo thwarted.

Amongst the rare objects in Mr. Burns' possession: King Arthur's Excalibur, the only existing nude photo of Mark Twain, and that rare first draft of the constitution with the word "suckers" in it. 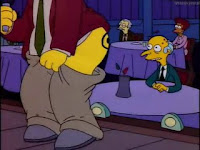 Favorite Quotes
Burns' Mother: Wait! You forgot your bear, a symbol of your lost youth and innocence!

The Ramones: Go to hell, you old bastard!
Mr. Burns: Have the Rolling Stones killed.
Smithers: Sir, those aren't --
Mr. Burns: Do as I say!

Ice Delivery Man: You've got to start charging more than a dollar a bag. We lost four more men on this expedition!
Apu: If you can think of a better way to get ice, I'd like to hear it.

Kent Brockman: The Burns bear, perhaps the most valuable widdle bear in the world, could be anywhere.  It could be in your house...You could be looking at it right now. It could be right in front of your face as I'm saying this, waggling back and forth, perhaps being held up by a loved one.
Homer: Maggie, I'm trying to watch TV.  Put that moldy old bear down! ... Moldy? Old? I'm gonna get something to eat!

Marge: Hmm…better sew that eye back on.
Bart: No! Let's send Burns the eye in the mail! He'll pay more money if he thinks the bear is in danger.
Homer: Yes, we'll send the eye.
Marge: I'm sure he'll offer us a fair reward…and then we'll make him double it! Well, why can't I be greedy once in a while?

Homer: Mmm...sixty-four slices of American cheese. Sixty-four... Sixty-three... [Next morning] Two... One...
Marge: Have you been up all night eating cheese?
Homer: I think I'm blind... 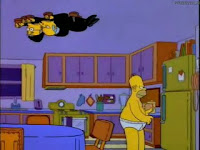 Teebore's Take
Another classic, another personal favorite, this is the episode that introduced me to Citizen Kane years before I ever saw the film (now one of my all time favorites). It is also the first of at least two episodes this season in which Mr. Burns is central to the plot (he'll feature significantly in at least two other episodes this season, without them really being Burns-centric). Burns has certainly played a significant role in episodes before (notably season two's "Two Cars in Every Garage and Three Eyes on Every Fish" and "Brush With Greatness"), but this is really the first one to show him in another light, to humanize and deepen the character.  Season five spends a lot of time with the show's extended supporting cast, and that begins in earnest with this episode.

This is also arguably the closest thing we've gotten yet to a Maggie-centric episode, and from that perspective, it's definitely one of the all time great Maggie episodes. The show is limited by the character's age in terms of how active she can be in the narrative, but running parallel to Burns' plight in this episode is the relationship between Homer and Maggie, and Homer's inability to disappoint the one child he hasn't abjectly disappointed yet, even in the name of undreamt of wealth. Logically, his refusal to give Burns the bear is maddening, but it lends the episode multiple moments of heart (all of which are undercut by the ever-present humor before they become too saccharine), and it certainly fits within the emotional aesthetic of the show: both Homer's inability to hurt his daughter and Maggie ultimately giving Burns the bear (for free) because she can sense it means more to him than her.

Mr. Burns' character is deepened in another hilarious, eminently-quotable all time classic. 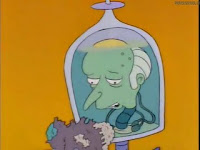