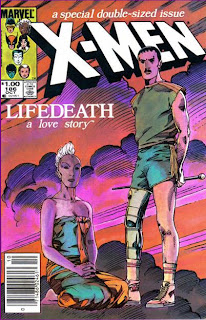 In a Nutshell
Storm and Forge grow closer as Storm deals with her power loss.

Plot
In Dallas, Forge tries to help Storm recover from the loss of her powers, but she is largely unresponsive, much to Forge's frustration. Back at the mansion, Professor X searches for Storm using Cerebro, but is unable to locate her since experiencing a burst of extreme psychic pain from Storm through the rapport he shares with all the X-Men. Nightcrawler worries that this may mean Storm has died, but Professor X forges ahead, switching tactics to try scanning for Rogue. Back in Dallas, Storm emerges from her room and discusses her situation with Forge, asking about Rogue, who is still missing, and mourning the loss of her powers. The pair go for a swim, and Storm learns the extent of the injuries Forge suffered in Vietnam, realizing they share a sense of physical loss. Meanwhile, in Mississippi, Val Cooper continues to search for Rogue when she's attacked by a group of Dire Wraiths. She's rescued by Rogue, who is after Val for information on Storm's whereabouts. 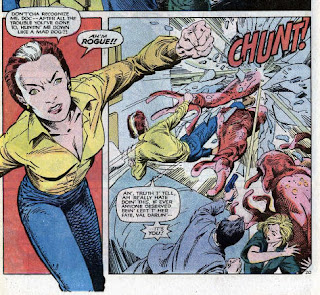 Rogue absorbs Val's memories, learning about Forge's involvement and Storm's power less. Though she feels responsible, she resolves to get the X-Men's help. Back in Dallas, Forge prepares dinner for Storm, and the pair grows closer. They share a kiss which is interrupted by a phone call. Forge leaves to take it in another room, and Storm, realizing she hasn't yet informed Professor X of her situation, picks up the phone. She overhears Forge's conversation with Henry Gyrich and learns that Forge built the weapon which depowered her. Horrified, she tries to run from his home, but loses control of his holographic simulations. Forge puts an end to the illusions and tries to explain himself, but Storm is angry at him for keeping his association with the government secret and refuses to believe he means well. Forge insists that he cares about her and that he's her best chance at getting back her powers, but Storm tells him his words ring hollow and leaves, insisting that though her feet may never leave the ground, one day she will fly again.

Firsts and Other Notables
This issue marks the beginning of an on again/off again romantic relationship between Storm and Forge, one which play an occasional role in the book for the next ten years or so.

Well regarded artist Barry Windsor Smith, most well known for his extended run penciling Conan, teams up with Claremont on the plot of this issue and contributes the pencils (longtime former X-Men inker Terry Austin finishes). It's not a traditional fill-in, as his involvement in the issue was planned from the beginning. He will team-up with Claremont in a similar manner for two future issues, a Storm-centric sequel of sorts to this issue and a Wolverine solo adventure.

Also, this is actually Smith's second issue penciling X-Men, following his fill-in on issue #53, the infamous Jean Grey orgasm issue. When that issue was published, Smith hadn't yet developed his now-distinct style, and his work was more akin to that of the numerous pencilers who were aping Jack Kirby at that time.

This is a double-sized issue, and cost $1.00 rather than the then-standard sixty cents. The word "uncanny" is omitted from the cover.

A Work in Progress
It's revealed that Forge fought in Vietnam, and lost his hand and leg there, the prosthetics of which he built himself. It's also established that Forge is specifically Cheyenne.

In the wake of Storm's depowering, Professor X is unable to locate her via Cerebro.

Storm notes that her power enabled her to regulate her body temperature so that she was always comfortable. 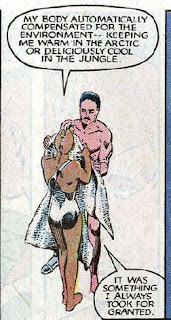 Val Cooper reveals that the energy discharge in the wake of Storm being hit by the Neutralizer last issue blew out the mutant scanner the government had received from the Avengers to track Rogue, leaving the government with an inability to track mutants, since Forge is now unlikely to offer up his scanner.

Storm tells Forge the origin of her claustrophobia, and claims he's the first person she's told it too (I have no idea if that holds up in current continuity). Also, before trying some of Forge's champagne, she says she doesn't drink (ditto). 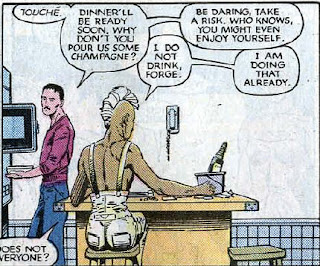 I Love the 80s
The cover continues to depict Forge as being very much of his time. 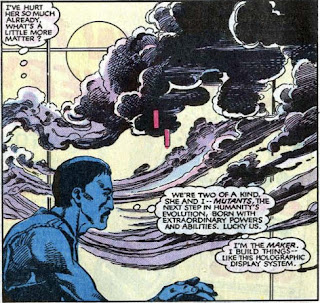 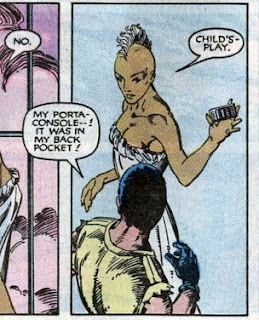 Forge's past as a Vietnam Vet, while perfectly fine in 1984, wouldn't hold up in Marvel's sliding timeline.

After donning an evening gown, Storm changes into a pair of overalls.

Storm uses the term "slow coach"; I have no idea if that's an outdated 80s version of "slow poke" or a Claremontism. 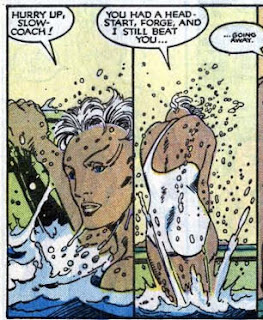 Claremontisms
Forge refers to himself as "the maker", which will become one of Claremont's frequently used nicknames for the character.

In a sequence which Jason Powell did a great job of criticizing, Storm randomly and inexplicable shares her origin with Forge, using some especially odd phrasing.

Young Love
Forge finds himself increasingly attracted to Storm, yet always manages to say just the wrong thing. Nevertheless, the pair share a kiss before Storm learns about Forge's involvement in her depowerment and, er, storms out of his penthouse. 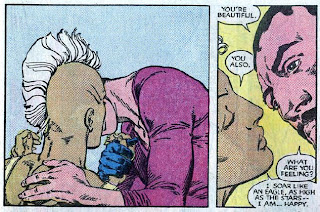 For Sale
The inside cover features an ad for Buckaroo Bonzai. 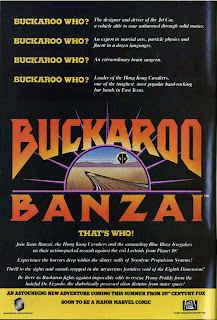 Chris Claremont on working with Barry Windsor-Smith
"Barry is one of the people I've admired from the very beginning and always dreamed of working with. I never thought the moment would arrive. But when it did, it was everything I could've hoped for and more. Barry ... had written long involved notes on the characterization, on aspects of the relationship between Storm and Forge, on how he might handle scenes. He was commenting on things that I had written in terms of the plot, making suggestions, all of which were germane, fascinating, interesting – and used, for the most part."

Teebore's Take
Confession time: I am not a huge fan of this issue. Though well regarded and acclaimed amongst many fans and critics, it's never really done much for me. Granted, I'm not the world's biggest Barry Windsor-Smith fan, and I wouldn't put him on a list of my favorite artists, but I can't deny he's a superior artist, and he does his best to elevate this material with some fantastic body language and great panoramic vistas. But the biggest problems, I think, are that nothing really happens in this issue, while Claremont fails to rise to the level of his collaborator. It is essentially, as the cover promises, a love story, but I find myself rather bored by and uninterested in the story it's telling. The Forge/Storm relationship, both here specifically and elsewhere, has just never captivated me the way other relationships have, in part because its foundation in this issue is built more on telling than showing. Claremont simply fails to sell the chemistry between these characters that he insists is there throughout the issue.

And while Claremont has at this point become a master of the quiet issue, where nothing happens except advancement of subplots or character development, the entire focus of this issue is on Storm. Intellectually, I know that an event like Storm losing her powers is something that demands a fair amount of attention, but by keeping the bulk of this oversized issue focused on her (even the few cutaways to other characters all feature reactions to Storm's situation, with an ancillary action sequence shoehorned into Rogue's efforts to locate Storm to remind us of the looming threat of the Dire Wraiths), I find myself more bored with than sympathetic to her plight. Even though she deserves this space to come to terms with her loss, the execution of that process leaves me cold (it doesn't help that the scripting moves further away from "effectively poetic" towards "overly wordy" as it progresses). In the end, it seems this is simply an issue where Claremont's interests are wildly different from mine, and one in which his words come up short compared to the art.

Next Issue
Tomorrow, the New Mutants have a slumber party and meet a new friend in New Mutants #21, and next week we catch up with Wolverine and Kitty in the Kitty Pryde and Wolverine limited series.
Newer Post Older Post Home
Posted by Austin Gorton at 10:00 AM