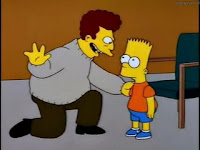 Or the One Where
A self-help guru convinces the town to follow Bart's example to "do what they feel like".

The Setup
In the wake of Homer's acquisition of a free trampoline, Marge is heading for a nervous breakdown when she realizes what a nag she is, until her sisters introduce her to Brad Goodman's self-help seminar.

Notable Notes
Albert Brooks makes his third (out of five, as of this writing) guest appearance on the show, as self-help guru Brad Goodman (reportedly modeled after real-life self help guru John Bradshaw).

James Brown also lends his voice to the episode, appearing as himself.

The sprawling shot of children wounded and maimed by the trampoline is an homage to a similar shot in Gone with the Wind.

Homer wears his attire from "Homer the Heretic" to the Do What You Feel festival.

Thanks to a bit at the end of this episode (quoted below), I forever associate it with cider. 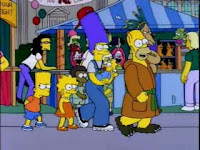 Brad: We can all learn a lot from this young man here, this, this --
Bart: Rudiger.
Brad: -- Rudiger. And if we can all be more like little Rudiger --
Marge: His name is Bart.
Brad: His name isn't important!

Lisa: This is madness. He's just peddling a bunch of easy answers.
Carl: And how!

Bart: Lis, everyone in town is acting like me. So why does it suck?
Lisa: It's simple, Bart: you've defined yourself as a rebel, and in the absence of a repressive milieu your societal nature's been co-opted.
Bart: ... I see.
Lisa: Ever since that self-help guy came to town, you've lost your identity. You've fallen through the cracks of our quick-fix, one-hour photo, instant oatmeal society.
Bart: What's the answer?
Lisa: Well, this is your chance to develop a new and better identity. May I suggest...good-natured doormat?
Bart: Sounds good, sis. Just tell me what to do.

Skinner: Damn...they're very slowly getting away!
Moe: They're heading for the old mill!
Homer: No we're not.
Moe: Well, let's go to the old mill anyway -- get some cider! 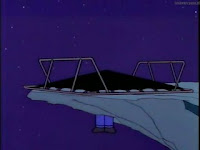 Teebore's Take
This is the first episode of the season that seems like a slight step down in quality. It's still pretty good, just not great, and the first episode to not immediately feel like an out-and-out classic. Though it contains one of my all-time favorite Simpsons first acts (all the business with Homer's trampoline) and one of my favorite gags towards the end, the general premise feels like a let down (perhaps because that first act is good, almost an entire episode in itself). Even for a town as whacky as Springfield, the logic behind Brad Goodman's "do what you feel like" mantra would lead to widespread anarchy much faster than it does (if told to do what I feel like, things I would no longer do include: wear pants, go to work, pay my bills). Thus, building the episode around this central premise leaves it lacking, as I just can't get over the illogical nature of it. Maybe that's just my hangup, but the fact remains, this is the first episode of the season I'm not immediately excited to watch (at least past the first act).

Though I have issues with the central premise, there's still plenty of classic material to make this episode very good, even if it's not a five-head classic. 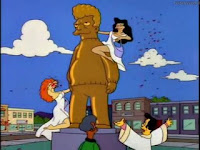