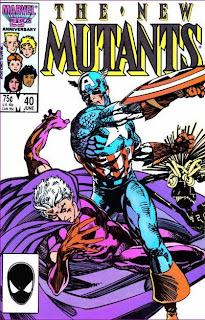 In a Nutshell
Magneto fights the Avengers.

Plot
The Snow Valley sheriff contacts the Avengers, alerting them that Magneto intends to kidnap some students from Emma Frost's Massachusetts Academy. They agree to help the sheriff and stop Magneto. Meanwhile, at the Massachusetts Academy, Cannonball, Magma and Jetstream train together, but Cannonball is distracted and performs poorly. Jetstream confesses to the White Queen that all of the New Mutants are suffering from nightmares and not sleeping well, leaving her to worry that her psychic surgery may not have been entirely successful. As dawn breaks, Magneto and Warlock are heading for the Academy when they're attacked by the Avengers, whose initial volley severely injuries and weakens Warlock. A fight between Magneto and the Avengers breaks out, with the Avengers firmly believing Magneto to still be villainous while Magneto does his best to protect Warlock and not cause serious harm to the Avengers. 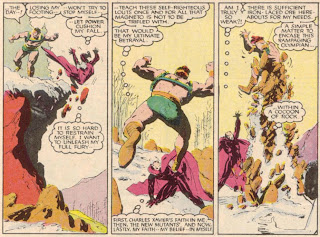 At the academy, Amara senses the battle, and Illyana teleports away to investigate. She then returns to fetch the rest of the New Mutants. Back at the battle, Magneto prevents a weakened Warlock from inadvertently draining the Avengers' life energy. Realizing he just saved their lives, Captain America asks Magneto why he did so, and Magneto answers that he has learned a better way. Just then, the New Mutants appear and teleport away with Magneto, telling the Avengers he's a hero now. Over the next several days the New Mutants, gathered at an inn located between the Massachusetts Academy and Xavier's school, undergo additional psychic treatments from the White Queen, aided by the emotional support of Magneto, enabling her to finally restore them to normal once and for all. With Magneto intent on reopening the school, the New Mutants decide to return there, nonetheless grateful for everything the White Queen did to help them. She leaves, having lost control over the mutants but confidant that Magneto will heretofore have a hard time convincing them she's villain he believes her to be.

Firsts and Other Notables
Through a combination of more psychic surgery from the White Queen and emotional support from Magneto, the New Mutants finally return in this issue to relative normalcy following their death and resurrection by the Beyonder, with Magneto subsequently reopening Xavier's school and reforming the New Mutants.

The Avengers guest star in this issue, appearing between issues #266 and #267 of their title, in the midst of Roger Stern's acclaimed run on the title and on the cusp of their seminal "Under Siege" storyline, featuring a lineup including Wasp, Captain America, Black Knight, Hercules, Captain Marvel (the female one with energy powers), and Namor the Sub-Mariner. This is also a time when the Avengers' Quinjets were being stored on Hydrobase, an artificial island offshore from New York, in order to circumvent FAA regulations that prevented the Avengers taking off directly from their mansion headquarters.

The book's new regular art team debuts in this issue. Jackson Guice, still the regular penciller on X-Factor, is joined by inker Kyle Baker. Whether its the presence of Baker or a lack of oversight from Jim Shooter, but Guice's art is much stronger here than on X-Factor, reminiscent of the recent Wilshire/Sienkiewicz pairing, giving the book a look that, while not matching the craziness and experimentation of Sienkiewicz's solo run, still fits in with the overall look of the book he established.

A Work in Progress
I don't think this was ever referenced in Avengers, but Claremont established that the Avengers' video screen automatically transmits images of the team in their proper attire to whomever they're speaking, regardless of their actual dress.

The Avengers have received word of Magneto's reformation, but are quick to discard it when contacted by the sheriff.

The White Queen notes that if the New Mutants are truly still damaged by their encounter with the Beyonder, they won't be such good assets for the Hellfire Club.

Wasp mentions that Magneto's power enables him to fly in "short hops", though we've seen him use it to fly over great distances at this point. 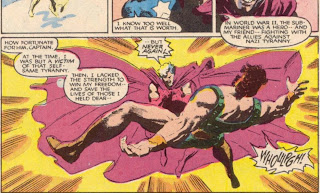 Amara notes that her power gives her a certain empathy with the Earth, enabling her to sense Magneto's nearby fight with the Avengers, the first time that aspect of her power is mentioned.

In the wake of their confrontation with Magneto and the New Mutants, most of the Avengers fear Magneto has recruited a new Brotherhood consisting of impressionable teenagers, but Captain America seems willing to give him the benefit of the doubt, noting that the Avengers have welcomed plenty of former villains into their own ranks through the years. 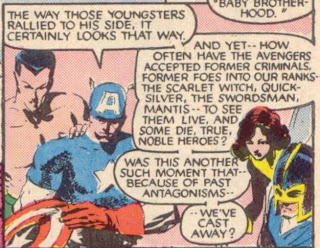 The White Queen offers Magneto two explanations for why she is returning the New Mutants to him without a fight, leaving him to decide which answer he prefers. 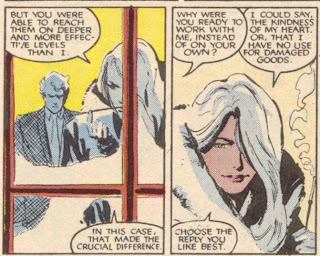 Ultimately, she comes away feeling like a winner: even though she no longer directly controls the New Mutants, by letting them choose their own path, she knows it will be difficult for Magneto to convince them she is anything but a friend.

Claremontisms
Magneto has metallic fibers laced into his cape, enabling him to expand it with greater strength than he could muster physically.

Teebore's Take
This issue is, quite simply, a ton of fun. The centerpiece is an extended fight sequence between Magneto and the Avengers, featuring one of my favorite lineups of that team. It;s arguably the best use of Reformed Magneto yet, as he's forced to defend Warlock while also holding back against the Avengers, even while they attack him with the fury reserved for their greatest villains. His characterization of the Avengers is fairly spot-on and consistent with how they're written in their own title, with Claremont drawing on Magneto's past with Namor and fittingly depicting Captain America as the one Avenger able to recognize Magneto's tactics as being less ruthless than expected, the one Avenger willing to give Magnet the benefit of the doubt and take his reformation at face value.

It's also another great showcase for Claremont's aptitude (ably assisted her by Guice and Baker) to choreograph clever, original fight sequences, showcasing Magneto's tactical mind as he goes beyond the usual force field/energy blast routine That Claremont and his collaborators are able to do all that and still satisfactorily wrap up the post-Beyonder arc in a way that gets the New Mutants back under Magneto's tutelage without reverting the Hellions or the White Queen to outright villainy is remarkable. The end result is a strong finish to a strong story, arguably the book's strongest non-Sienkiewicz drawn story.

Next Issue
Tomorrow, Frenzy makes her first appearance in X-Factor #4, while next week, we look at the Firestar miniseries followed by X-Factor Annual #1.
Newer Post Older Post Home
Posted by Austin Gorton at 12:00 PM