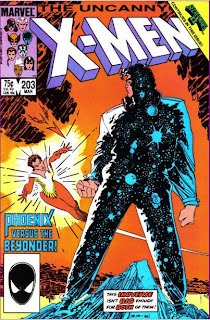 Plot
In San Fransisco, Rogue recalls the last time she was in the city, when she battled Ms. Marvel and effectively killed her, permanently stealing her powers and memories. Returning to the home of Jessica Drew, where the X-Men are staying, Rogue spies Kitty outside. She is wearing Illyana's armor and wielding her Soulsword, and though Kitty remembers her, Rogue remembers nothing about Illyana or the New Mutants. Kitty rails against the Beyonder for having killed the New Mutants, and wonders what chance the X-Men have against him, when Rachel appears. Still flush with the additional power granted her by the Beyonder, she tells Kitty and Rogue her plan to destroy the universe, and the Beyonder with it, in the hope that whatever comes next will be free of his taint. She asks her teammates for their life essences in order to sustain her power, and both pass theirs on willing. Rachel proceeds to take the life essence from the rest of the sleeping X-Men, but a wakened Storm argues with her intention and refuses to give up her life essence, so Rachel takes it by force. 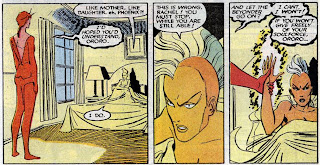 Leaving Earth, she flies across the galaxy to the planet of the M'Kraan crystal. She enters the crystal, intent on unleashing the neutron galaxy her mother once fought to contain. The essences of the X-Men manifest inside the crystal, and Storm continues to argue against Rachel's plan, but Rachel is adamant that this is the only way to destroy the Beyonder. However, in the process of unleashing the galaxy, Rachel connects her mind to that of every sentient being in the universe and finds herself unable to end all that life. She and the X-Men return to Earth, much to the arriving Beyonder's disappointment, as he'd hoped Rachel would use the power he gave her to destroy the universe and send the X-Men out with a bang. Instead, Rachel gives him back his power, along with everything she experienced while connected to the minds of the universe. The totality of life that he experiences overwhelms him, prompting the X-Men to explain that as life is defined by its finite span, he can never truly understand it while he remains immortal. Humbled, the Beyonder leaves without incident, and the X-Men wonder if they've made any difference.

Firsts and Other Notables
This issue represents the final Secret Wars II crossover issue, the Beyonder having moved on to his "pissed off at humanity" phase. It takes place between Avengers #265 and Fantastic Four #288.

Nightcrawler does not appear in this issue, and its mentioned again that the Beyonder left him behind when he teleported the rest of the X-Men to San Fransisco. However, with the Beyonder also wiping the New Mutants, including the X-Mansion, from existence in New Mutants #37, it's unclear where exactly he is.

Professor Xavier appears briefly, aboard the Starjammer, his life essence (and the essences of the rest of the Starjammers) also taken by Rachel in her quest. This marks his final appearance in this book for several years. 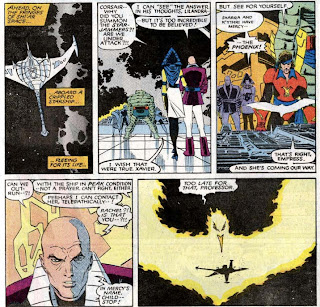 This issue finds the X-Men still in San Fransisco, having stayed in the city to help clean up in the wake of their battle with Sentinels in the previous issue. They are staying with Jessica Drew, the former Spider-Woman, whom they previously visited in Spider-Woman #37. Drew is amongst those who willing give their life essences to Rachel. 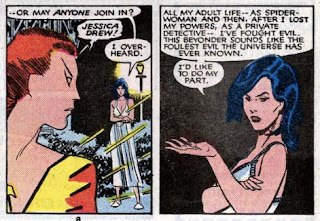 The Chronology Corner
Following this issue, the X-Men appear in Secret Wars II #9, the final issue of that series, in which Rachel is instrumental in rallying Earth's heroes against the Beyonder. During the course of their battle, the Beyonder resurrects the New Mutants and sets them against the heroes (who still don't recognize them as a result of the Beyonder erasing them from existence). Ultimately, the Beyonder is killed by Molecule Man, who shunts the Beyonder's vast power back into the universe the Beyonder abandoned, where it triggers a big bang and a universe full of varied life is formed.

Later, in Avengers #266, which serves as an epilogue to the series, Molecule Man uses his power to restore damage done by the Beyonder, including returning the X-Mansion to its pre-Beyonder state.

A Work in Progress
This issue opens with Rogue recalling her battle with Ms. Marvel that led to her permanent absorption of Ms. Marvel's powers and memories, one of the earliest such depictions of those events (as Rogue had already committed that deed when she first appeared), which ends right where Avengers Annual #10 picks up (with Spider-Woman rescuing Ms. Marvel after she was thrown off the Golden Gate bridge by Rogue; in a neat little detail, Romita draws Ms. Marvel's costume reverting to her street clothes as Rogue drains her, as that's what she was wearing when Spider-Woman caught her) 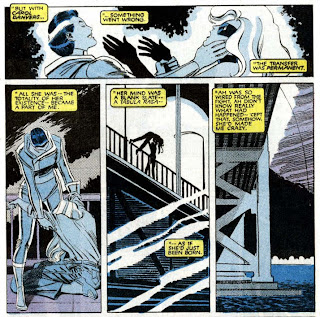 She later notes that the city of San Fransisco has been generally welcoming to the X-Men.

In the wake of the New Mutants' deaths and erasure from existence in New Mutants #37, Kitty is once again wielding Illyana's Soulsword and wearing her armor, and remains the only person to remember the New Mutants, due, she believes, to the unique bond shared between her and Illyana. 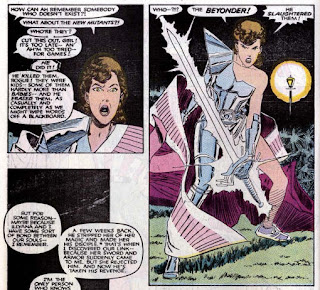 Rogue also mentions offhandedly that she doesn't believe in God.

Magneto, in the wake of being connected to all the life in the universe via Rachel, finds himself rethinking his assertion that, given the opportunity to kill Hitler as an infant, he'd do so. 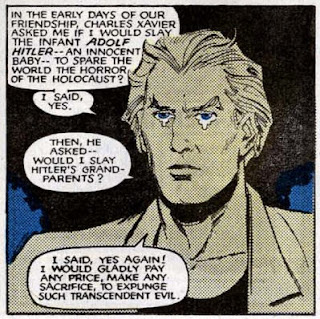 As the Beyonder confronts the X-Men at the end of the issue, believing their deaths to be imminent, Wolverine thinks of Mariko, while Colossus wishes he could have said goodbye to his parents. 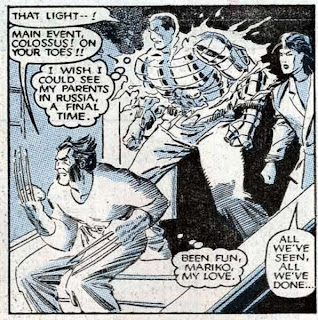 Artistic Achievements
Romita and Williamson turn in a nifty two page spread that depicts Phoenix merging with all the minds in the universe. 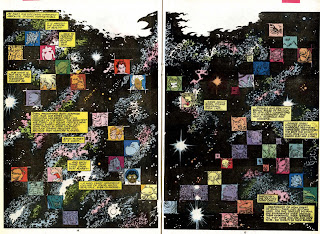 Like a Phoenix, From the Ashes
Rachel travels to the M'Kraan crystal, last seen in issue #108, overpowering its initial guardian, Jahf, intent on releasing the energy of the neutron galaxy her mother once contained. 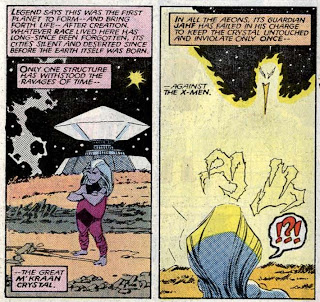 For Sale
Captain America's going to Broadway - and you can too! (For the record, I don't think Cap ever actually made it to Broadway). 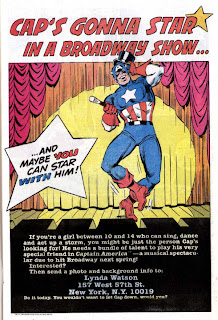 Teebore's Take
At last, we come to our final Secret Wars II tie-in issue. Thankfully, as in the past, Claremont largely pushes the Beyonder into the background, using the character as a catalyst to a tell a story rooted firmly in the history of the X-Men. With that story, Claremont returns to the conclusion of his first significant story on the title, as Rachel, the new Phoenix, walks in her mother's footsteps. As her mother before her, Rachel journeys into the heart of the M'Kraan crystal, accompanied by the life essences of the X-Men. But where Jean Grey took life essences freely given, Rachel has taken them without asking and, in some cases, by force, over her teammates' objections, and where Jean entered the crystal in order to save the universe, Rachel does so to destroy it (and, by extension, the Beyonder, though even she admits her plan is something of a Hail Mary and may not ultimately succeed in destroying the Beyonder).

Yet in the end, Rachel relents, and Phoenix is repudiated: where the vast power at her disposal ultimately corrupted Rachel's mother (or at least, as we now know, the being posing as her mother), Rachel's power instead allows her to connect with every sentient mind in the universe, making her one with the richness and diversity of existence, leading her to abort her plan to destroy it all. It is a redemptive act for Phoenix, a way to show that absolute power doesn't have to corrupt absolutely, and coming as it does only two months after Jean's return from the dead, it could be read as Claremont's attempt to show that it's possible to tell stories about Phoenix without Jean Grey. Whatever the motivation though, this issue stands as the zenith of Claremont's work on Rachel in this title. Though she'll stick around for several more issues, and Claremont will again write the character, here and elsewhere, in the future, for now he's had his final say on the subject: Phoenix is ultimately a force for good. She has been redeemed.

Next Issue
Tomorrow, the New Mutants try to deal with their death and resurrection in New Mutants #38, while on Friday, Cyclops finally tries to call his wife in X-Factor #2, followed next week by Uncanny X-Men #204, in which we catch up with Nightcrawler.
Newer Post Older Post Home
Posted by Austin Gorton at 12:00 PM