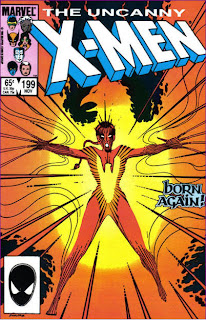 Plot
After working out in the Danger Room, a visiting Cyclops meets with Moira and Wolverine, and learns that Professor Xavier is dying. In Washington DC, Val Cooper arrives home to find Mystique waiting for her. In light of rising anti-mutant sentiment, she gives Val a proposal: so as to avoid ending up in jail, or worse, the Brotherhood of Evil Mutants will work for the government as Freedom Force. Tempted by the offer, Val agrees, on the condition that the Brotherhood successfully completes a trial mission: the capture of the Brotherhood's founder, Magneto. In upstate New York, Rachel visits the home of her grandparents. Remembering the heroic actions of her mother, both in this timeline and her own, Rachel claims the mantle and power of Phoenix for herself, determined, in the event of Xavier's death, to defend mutants from both the forces of hatred and the Beyonder, and to make amends for all the bad things both she and her mother have done. 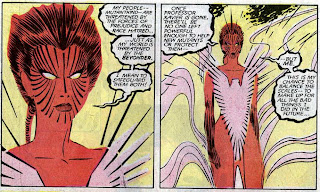 In Washington, Kitty, Magneto and Lee Forrester attend a special reception at the National Holocaust Memorial. Kitty addresses the crowd on behalf of her deceased grandfather, asking for any information about his sister. She meets a pair of Holocaust survivors who not only knew her great-aunt, but were saved from Auschwitz by Magneto. Suddenly, Lee transforms into Mystique, and, joined by the newly-christened Freedom Force, attempts to arrest Magneto. As Kitty leaves to rescue the real Lee, Magneto defends himself while making an effort to clear the room of bystanders. He is soon joined by the rest of the X-Men, whom Kitty radioed for help. Though they ultimately defeat Freedom Force, Magneto asks them to stand down. Seeing the looks of fear on his friends' faces as he defended himself, looking at the damage their battle caused to the memorial, he wonders if he's become what he hated. For the good of his own salvation, and that of mutantkind, he turns himself in to face his accusers and stand trial.

Firsts and Other Notables
This is the first appearance of Freedom Force, the name taken by Mystique's Brotherhood of Evil Mutants as they offer their services to the government. Freedom Force will remain together and working for the government until shortly before Claremont's departure from X-Men, at which point the "Brotherhood of Evil Mutants" name will be reformed under a different leader.

Rachel adopts the mantle and power of Phoenix as of this issue, finally getting a code name. Future issues of Excalibur will reveal that the Phoenix Force bonded with her prior to her return to the past, meaning she's technically been channeling that power since her first appearance in New Mutants #18, but this is the first time she acknowledges it. 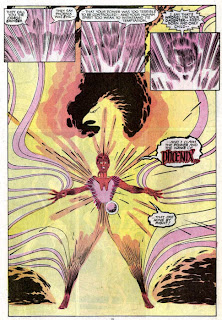 The gradual reformation of Magneto continues, as in addition to setting up his trial in the next issue, we see him at perhaps his most sympathetic as we learn that while imprisoned in Auschwitz, he did what he could to help inmates escape, a story that Claremont will flesh out in the backup to Classic X-Men #12. 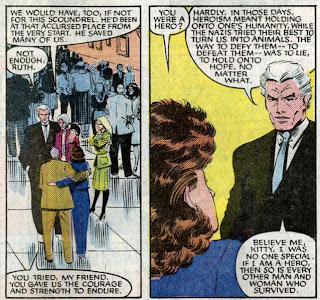 Spiral, only a month after her debut in the Longshot miniseries, appears in this issue, having joined Freedom Force. She mentions being eager to return to her hunt for Longshot, suggesting this issue occurs before or during her first appearance in Longshot #1 (which the Marvel Index lists as occurring after this issue, while the Marvel Chronology Project lists this issue as occurring during that issue). 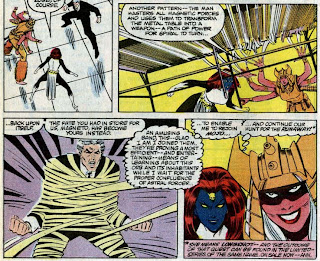 Cyclops, as setup in issue #197, makes his triumphant return to the X-Men (though he's not considered to have officially rejoined the team). He'll stick around for the upcoming annual and a few issues after that, before leaving again to star in X-Factor.

Cyclops says that despite Xavier's assurances and his recent time with the X-Men, he still doesn't trust Magneto. On the one hand, it makes sense that one of the original X-Men, who spent the most time fighting Magneto, would be wary of him, and it also partially sets up his attitude towards the X-Men in X-Factor. On the other hand, Cyclops himself has fought beside Magneto, both during the original Secret Wars and "God Loves, Man Kills".

On a personal note, back when I was first getting into the X-Men and doing my best on the limited budget of a pre-teen to read as many back issues as I could, this issue was, for a time, the oldest non-reprint issue of the series I owned (for whatever reason, the Shinders I frequented at the time was selling it for much less than other issues of this vintage). As a result, I carried around a particular fondness for Rachel Summers for a long time, until I realized all she ever did was cry.

A Work in Progress
A narrative caption mentions Cyclops and his brother having been found, as children, on the prairie, after being pushed out of their parents' crashing airplane, but most depictions of that event usually show it as happening somewhere more wooded and northern (usually Alaska).

Cyclops is forced to blow off a meeting with Rachel, and wonders she seems so interested in him, suggesting he doesn't suspect she is his daughter (despite implications to the contrary in X-Men/Alpha Flight #2, which takes place before this issue even though it was published after it).

Moira makes it clear to Cyclops and the readers that Professor X is dying, as a result of his having not taken it easy in the wake of being attacked in issue #192.

Mystique, while pitching Val Cooper on the idea of the Brotherhood working for the government as Freedom Force, notes that former Brotherhood members Quicksilver and Scarlet Witch reformed and joined the Avengers, as did former villains Mantis and Swordsman. 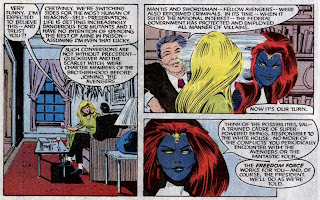 Rachel recalls a conversation her parents had shortly after she was born; it's unclear how she could possibly remember it in such detail. 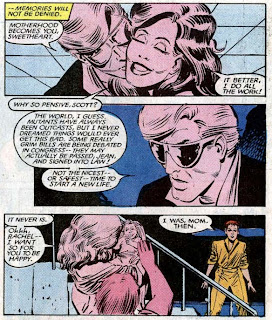 Nightcrawler once again can't concentrate on anything but his inability to concentrate. 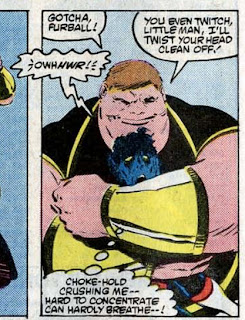 Later, he teleports Blob and leaves him atop the Washington Monument, noting it's the largest mass he's ever teleported. 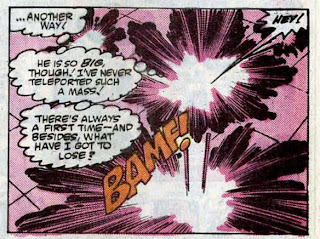 Mystique is seen in the background of a panel drawing a gun from her belt, having transformed one of the skulls into the weapon, a gadget she had used previously in Ms. Marvel.

Despite claiming to bow to no authority nor claiming any nation as his own, Magneto ultimately surrenders to Freedom Force, unwilling to cause further damage and endanger further lives by battling them, and accepting that perhaps he can do mutants the most good by standing trial and defending his actions in a court of law. 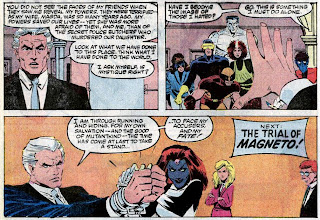 I Love the 80s
Mystique shapeshifts into President Reagan.

Like a Phoenix, From the Ashes
Rachel experiences the presence of her mother thanks in part to the holoempathic matrix crystal given to Jean's parents by Lilandra in issue #138. 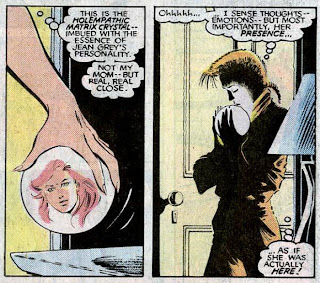 Rachel Summers, Crybaby
Upon overhearing that Xavier, at best, might live to see the birth of Cyclops' child, Rachel begins to cry, though it's unclear if she's sad about Xavier or still upset over the fact that Cyclops' baby isn't her. 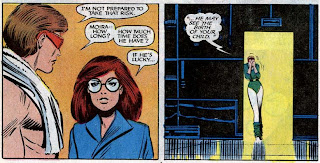 Human/Mutant Relations
Magneto makes the metaphor explicit by saying he worries that what the Jews suffered during the Holocaust may be next for mutants. 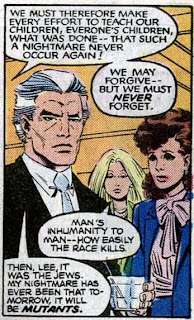 For Sale
Who wants to be an astronaut? 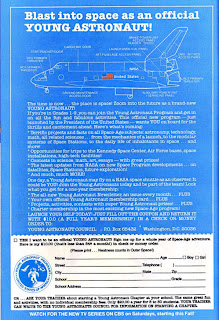 I remember this robot watch (because seriously, a transforming watch? That's awesome), though I recall it being explicitly labeled a Transformer and possibly being some kind of mail away offer with proofs of purchase from Transformer toys. Maybe that came later. 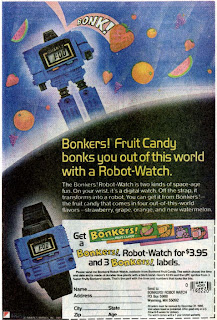 It's in the Mail
The letters page announces the upcoming Heroes for Hope charity jam issue, with the proceeds going to African famine relief, while the response to a letter confirms that X-Men Annual #8 and the then-upcoming X-Men/Alpha Flight limited series takes place in the gap in time during issue #192. 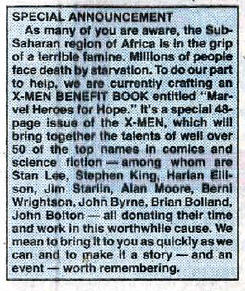 Teebore's Take
Oddly enough for the one hundred and ninety-ninth issue (as opposed to a more rounded, milestone-y number like 200), this is one of the most pivotal issues in the X-Men narrative. Not for Rachel's assumption of the mantle of Phoenix, as teased by the cover, or even for the way it edges Magneto ever closer to full-on reformation, but for the way it completes the transition, begun in earnest in issue #193 (but stretching all the way back to "Days of Future Past") of the X-Men from a group of heroes determined to help humanity by fighting evil mutants, to a group that must fight both evil mutants AND humanity.

The anointing of the Brotherhood of Evil Mutants as the government-sponsored Freedom Force is what marks the completion of that transition. The villains the X-Men once fought (sharing a name, if not the exact membership, with the group the original team first fought all the way back in their fourth issue) are now working for the government. Where the X-Men once fought these villains to protect the establishment, the establishment is now turning those villains loose on the X-Men. Their break from the traditional hero model is complete. And while the X-Men will still act as heroes, their goals and methods must change as a result: where once they fought to uphold the status quo, they must now fight against that status quo while also trying to change it. They have, in essence, become revolutionaries. Thus, it is not surprising to find them working alongside Magneto, once the most ardent foe of the human establishment and most notable mutant revolutionary. And while Magneto has been shown to be tempering his methods in recent issues, the X-Men will not be unchanged by their transition either.

Next Issue
Tomorrow, "The Hunt for Karma" concludes in New Mutants #34, and next week, the New Mutants end up in Asgard in New Mutants Special Edition #1 (it takes place before X-Men Annual #9, hence we'll cover it on X-Men's usual day of the week).
Newer Post Older Post Home
Posted by Austin Gorton at 12:30 PM