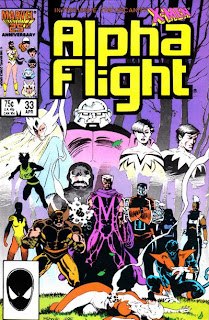 Plot
Issue #33: Heather Hudson, having adopted her deceased husband's battle suit to lead Alpha Flight, flies from Canada to New York, hoping to convince Wolverine to help train her to be a more effective fighter. When she locates the mansion, the X-Men initially perceive her presence as a threat, and Magneto attacks her before Wolverine informs everyone that she is a friend. Together, she and Wolverine go off into the woods around the mansion, where they discuss their past together and Heather asks Wolverine for help, which he agrees to give. Just then, they're confronted by a group of ninjas led by a woman named Lady Deathstrike, who declares that Wolverine's power was stolen from her, and she intends to take it back. 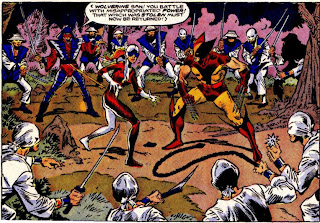 Issue #34: Lady Deathstrike and her ninjas attack Wolverine and Heather, with Lady Deathstrike revealing that her father created the process which bonded the adamantium to Wolverine's bones, a process she believes he has since stolen. This sparks a memory in Heather, of a file on adamantium bonding she once saw amongst her husband's things, making her fear that he is responsible for making Wolverine what he is. Heather and Wolverine split up, with Wolverine eventually taking on Deathstrike alone while Heather handles her henchmen. Lady Deathstrike gains the upper hand on Wolverine, but before she can kill him, Heather intervenes, rescuing him and defeating Deathstrike, proving that she can take care of herself.

Firsts and Other Notables
Previously mentioned in Uncanny X-Men #140, Alpha Flight #33 gives us an extended flashback depicting Wolverine's first encounter with James and Heather Hudson (future leaders of Alpha Flight), in which a nearly-feral Wolverine attacks the couple on their honeymoon, is subdued, and ultimately nursed back to humanity. Eventually, it will be revealed that this event occurred shortly after Wolverine underwent the process which gave him his adamantium skeleton, the resulting pain of which causing his animalistic state, making this the oldest event in Wolverine's past we've seen yet. 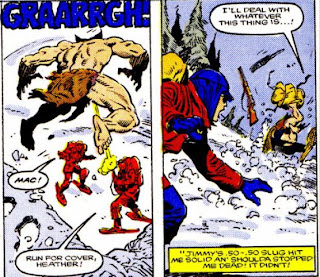 Alpha Flight #33 is also the first appearance of Lady Deathstrike, the super-villain persona of a woman named Yuriko Oyama (who first appeared in Daredevil #197, of all places). Following these two issues, she will become a recurring antagonist of Wolverine specifically and the X-Men in general (we'll next see her in Uncanny X-Men #205, when she'll be sporting her familiar look, cybernetic implants and claws of her own), and was one of the villains in the second X-Men movie. 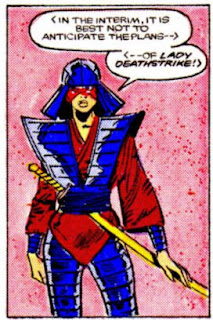 Her father, Lord Dark Wind, is a Japanese crime lord and scientist responsible for coming up with the process which bonded the adamantium to Wolverine's bones, and she erroneously believes that Wolverine stole that information from her father, dishonoring him (Wolverine knows she is wrong, and believes that it was the Canadian secret service which is responsible for both stealing the process and giving him his skeleton, something which will ultimately prove to be partially true).

It's mentioned that the same process which bonded adamantium to Wolverine's bones was used to provide Daredevil villain Bullseye an adamantium spine (which is how Lady Deathstrike ended up making her first appearance in Daredevil).

At the end of issue #34, Heather decides to take the name Vindicator, determined to vindicate the sins of her and her husband's past.

These two issues are written by Chris Claremont's old buddy and Rom writer Bill Mantlo, who took over the book from its creator, John Byrne, after Mantlo and Byrne decided to swap two of their titles, with Mantlo taking over Alpha Flight while Byrne went to write and draw Incredible Hulk. Pencils come from Sal Buscema who, amongst other things, we remember as the one-time regular penciller of New Mutants and for giving people trapezoidal mouths, while Mike Mignola, future creator of Hellboy, provides the covers (both of which are pretty great).

A Work in Progress
Heather tracks down the X-mansion by flying over upstate New York, looking for a mansion which matches the one in the background of a picture Wolverine sent her (she also mentions being unable to do James' "at rest with the orbit of the Earth" trick to increase her speed).

When she finds the mansion, the X-Men, including Magneto, are leaving for the opera (specifically, Mozart's "The Magic Flute"). 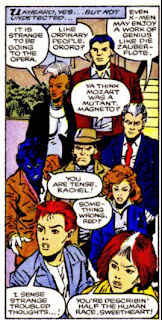 As Magneto attacks Heather on his own initiative, Storm reminds him that while he may be teaching the New Mutants, she still leads the X-Men. 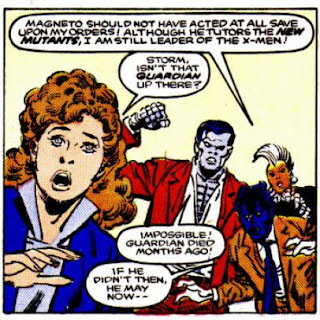 Throughout these issues, Heather references having been her husband's secretary before Alpha Flight was formed; she was actually his boss' secretary.

I Love the 80s
The entire sequence in which we see the Hudsons encounter a feral Wolverine is setup as Wolverine telling the story to Heather...except Heather was there for all of it, so its essentially one really long bit of "as you  know..." exposition.

The Best There is at What He Does
In the flashback of issue #33, we see Wolverine, after being captured by the Hudsons, discover his claws for (seemingly) the first time.

It's also revealed that Wolverine served in the Devil's Brigade in World War II, a further indication of his advanced age, and that he has no memory of the details surrounding the process which bonded the adamantium to his bones, beyond the tremendous pain it caused.

The more Lady Deathstrike taunts Wolverine, the more he has to resist the urge to kill her, which, while honorable, is not the X-Men's way. 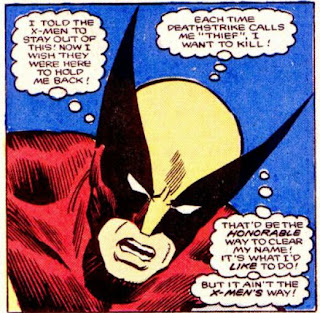 Young Love
Wolverine admits to Heather that he left Department H to join the X-Men because he realized that Heather would never leave James for him, and torn between his feelings for her and his affection for James (who was like a brother to him), he left rather than make a scene.

Teebore's Take
Once again, Wolverine more or less takes over Alpha Flight, this time for a pair of issues. Issue #33 fleshes out another moment from Wolverine's past, his discovery in a near-feral state by the Hudsons, something referenced before but lacking in detail. Here, we learn that it was mainly Heather who coaxed him back to humanity, resulting in his longtime affection for her. Even after two limited series and a near-constant presence in X-Men, this was still a time when these brief snippets of details about Wolverine's past were a welcome novelty, and it remains fun to see something mentioned in passing fleshed out. Issue #34, on the over hand, is more about Wolverine's future. Essentially an issue-long fight scene with the word "honor" used a lot, it introduces Wolverine to Lady Deathstrike, a character who will become a regular member of both his and the X-Men's rogues gallery.

While Wolverine's involvement in these issues is spurned on by the actions of one of the book's main characters (Heather's desire to become a better leader/fighter), I can imagine regular Alpha Flight readers being irritated by their book's sudden focus on a guest star from another title, as most of the book's regular stars are relegated to subplot interludes. But for X-Men readers, these two issues are surprisingly significant to the development of their book's biggest star, fleshing out his past and introducing what will become a significant and longstanding new antagonist.

Next Issue
Tomorrow, the New Mutants help clean up their demon mess in Power Pack #20, and next week, the X-Men do a good deed in X-Men: Heroes for Hope #1.
Newer Post Older Post Home
Posted by Austin Gorton at 12:00 PM