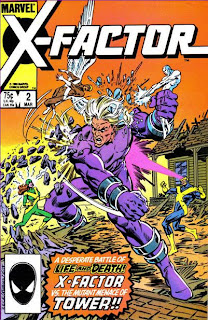 "Bless the Beasts and Children"
March 1986

In a Nutshell
Beast is captured by his old foe, Carl Maddicks.

Plot
Jean wakes from a nightmare, once again dreaming of her encounter with Phoenix, and broods on how alone and out of place she feels. Elsewhere in the X-Factor complex, Warren urges Scott to call his wife, but when Scott snaps at him, he leaves to go over some business with Cameron Hodge. In New York City, Hank and Bobby put a hold on their apartment hunting to meet an old friend of Hank's, Vera, and are shocked by her new look. Back at the X-Factor complex, Scott and Jean lead Rusty in his first training session, but he runs off after making a mistake. In New York, Hank and Bobby are attacked by Tower, who's been hired to capture Hank. Tower manages to knock him out, then delivers Hank to his employer. Meanwhile, Scott decides to call Maddy, but discovers the number has been disconnected. Just then he is summoned by Warren to join the rest of the team to respond to Hank's kidnapping. 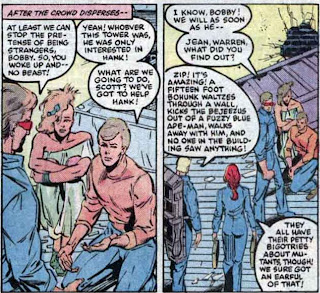 Hank awakens in an underground lab in Georgia and learns he's been captured by Carl Maddicks, his old foe from the Brand Corporation, who hopes Beast will help him cure his son of his mutation. Hank refuses, but Maddick's son is able to pull the necessary information from Hank's mind. As Maddicks prepares to test his process on Hank, he calls X-Factor and sets them on Tower in order to tie up loose ends. X-Factor, in their costumed identities, locate Tower and subdue him, and he cuts a deal to take them to Hank, just as Maddicks experimental process sends Hank into cardiac arrest.

Firsts and Other Notables
Arthur "Artie" Maddicks, son of scientist Carl Maddicks, makes his first appearance in this issue. Artie is a young mutant with pink skin, bulbous eyes and a large head who possesses the ability to create visual images of people's thoughts, a power that really only works in the context of a comic book (it falls apart once you wonder what the characters are seeing while we're looking at pictures drawn into a word balloon). Future issues will establish that Artie is mute, able to communicate only through his mental pictures. 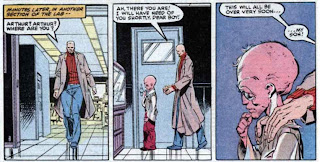 Tower, a villainous mutant with the ability to change his size, also appears for the first time. He'll pop up repeatedly in these early issues of X-Factor, then largely vanish into obscurity. 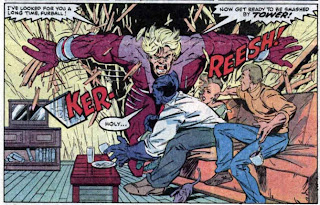 Vera Cantor, Beast's regular girlfriend from the original run of X-Men, returns this issue. Since last we saw her, she's taken college courses in pop culture and traded in her traditional librarian look for some kind of New Wave/punk look. She references both Elvis Costello and Argentinian singer Mercedes Sosa, with whose work Bobby, oddly enough, is familiar). 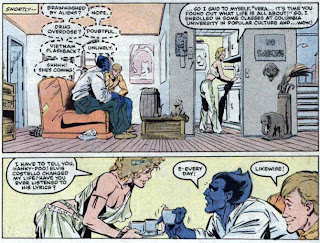 Carl Maddicks, Beast's villainous colleague from the Brand Corporation, as told in his solo stories in Amazing Adventures, returns (Maddicks is the reason Beast is currently blue and furry, as he drank the chemical mutation serum he'd devised in order to prevent it from falling into Maddicks' hands). Maddicks is hoping to trick Beast into helping him "cure" his son of being a mutant. 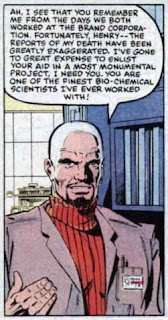 After only one issue, the creative team undergoes a change, as Mike Carlin, fed up Jim Shooter's micromanagement, has quit the title and been replaced by Bob Harras, making this issue Harras' first work on a book even tangentially connected to the X-Men line. Harras will go on to become almost as polarizing a figure in the industry and amongst fans as Jim Shooter, eventually becoming the linewide editor of the X-Men franchise during its sales heyday and forcing Claremont out of the franchise in favor of the fan favorite artists who propelled the books in the line to new sales heights, all en route to becoming the Editor-in-Chief of Marvel, before leaving that position in the wake of Marvel's mid-90s bankruptcy problems. He is currently a VP and the Editor-in-Chief at DC Comics, brought aboard shortly before the launch of their "New 52" linewide revamp a few years ago.

A Work in Progress
Jean has noticed that Scott is oddly distant towards her. 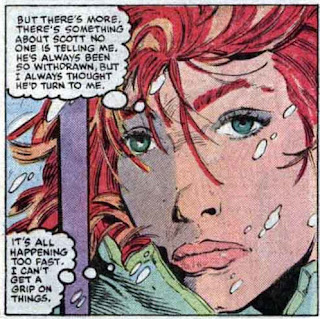 Jean's reminiscences of the events of issue #1, when she was reunited with Scott, depict her in a different outfit than she was wearing (in issue #1, it was a black dress). 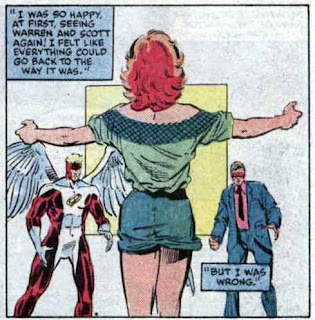 Angels spends the opening pages of the issue, arguing with Scott and meeting with Cameron Hodge, wearing only his underwear and a bathrobe.

Later, he's seen wearing a large backpack when posing as a mutant hunter, which will become his regular method of concealing his wings when playing mutant hunter (despite the fact that he doesn't wear a mask as Angel, and Warren Worthington is both a known mutant and something of a celebrity). 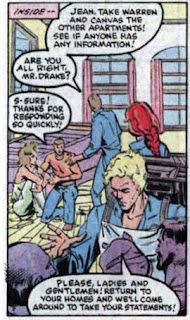 Adding to the book's retro feel, Cyclops is once again ordering his teammates to perform specifically numbered maneuvers. 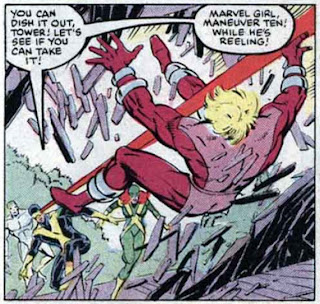 I Love the 80s
Tower compares himself to TV's Ben Casey. 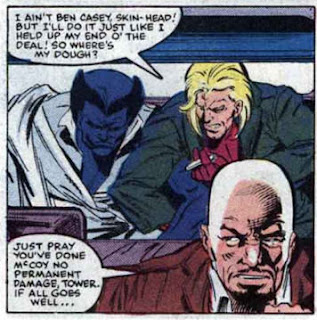 Scott Summers, Husband of the Year
Angel finally steps up and tells Scott to call his wife, which Scott snipply blows off, saying Angel is too much of a playboy to understand what he's going through.

He does, however, eventually try to call Maddy, but when he does, he discovers the number is disconnected, kicking off what will become a long running "what happened to Maddy and the baby?" subplot that will be handled alternately by this series and Uncanny X-Men. It's also a pretty lame way to get Scott off the hook ("he called her!") while still leaving the door open for as much angst about the situation as possible. 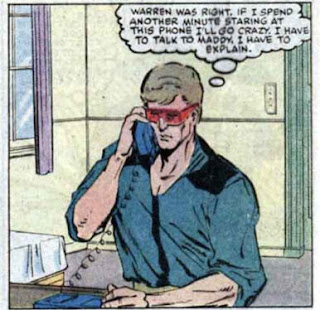 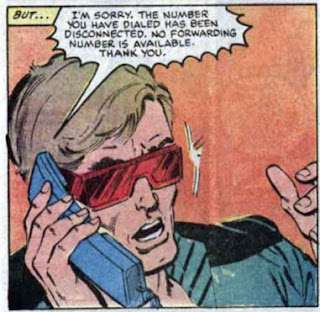 The Awesome and Terrible Power of Cyclops
This prompts Cyclops to blame his inability to reach his wife, after running out on her without explanation and not contacting her for weeks on end, and, in general, his inability to lead a normal life, on his cursed optic blast. 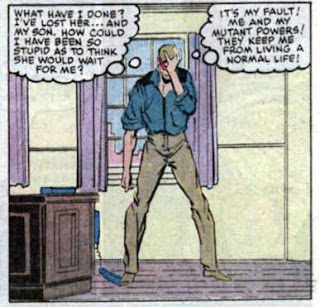 Young Love
Scott believes Rusty has a crush on Jean.

Human/Mutant Relations
When X-Factor shows up at Vera's apartment in their mutant hunter outfits, the crowd outside cheers them, telling them to drag the mutant out so they can deal with him.

Mike Carlin on leaving X-Factor
"We gave him [Shooter ] the second issue, and he wanted us to redo that one from scratch. I said, 'you know what, I'm not quitting Marvel, I'm quitting this book. You should edit this yourself. You're the only one that knows what you want to have happen here.' And he goes 'alright, alright,' and he gave it to Bob Harras to do after that, And for the next six months, I edited books, but I was given things like Chuck Norris comics. I think by quitting X-Factor I got on his radar pretty heavily."

Bob Harris on being assigned X-Factor
"X-Factor just didn't feel like an X-Men book to me … There seemed to be such a divide between those original five characters and the characters over on the main X-Men book. There didn't seem to be any logical reason why these characters were interacting. Jean Grey was back from the dead, but I don't remember if anyone in the main X-Men book was reacting to it. Madelyne Pryor was still a character in the X-Men books, but because Scott had moved into the X-Factor book, there was a de facto separation between this married couple who had just had a baby. Scott was being portrayed in a lot of ways, but mostly as this absent, neglectful father and husband, which was not the way I saw him."

Teebore's Take
The second issue of X-Factor is, unfortunately, more of the same: more flashbacks to Jean's interactions with Phoenix (making this the third month in a row, if you read Fantastic Four #286, to feature these almost identical panels), more of Scott acting like an out-of-character jerk, more pedestrian panel layouts and wooden dialogue. It's possible, in the case of the later two, that Layton and Guice are intentionally trying for a Silver Age pastiche, especially with the return of Vera, featuring an all new, all 80s look to juxtapose against the old sixties sensibilities. But if that is the case (and frankly, even suggesting it seems an act of great charity), their pastiche lacks any of the charm that such retro stories need to succeed. Instead of remembering fondly a more innocent and carefree time for these characters, we're instead left wondering why they're all acting like some combination of idiots and nothing like the characters they grew into during 15+ years that have passed since they split up.

Meanwhile, X-Factor gets its first villain in the form of Tower, a fairly generic mercenary type who more than anything underlines the fact that this book, at the start, was intended to exist firmly outside the sphere of X-Men and New Mutants (in fact, X-Factor won't encounter a villain that's previously appeared in either of those series until issue #8, after Simonson has come aboard). Furthermore, Tower's deliverance of Beast to Maddicks in this issue will ultimately prove, as we'll see next issue, to serve no purpose beyond getting Beast to a place where he can more effectively function as an X-Factor Mutant Hunter, meaning that the first story arc of the new series is about little more than continuing to setup the book's flawed premise, and any hope that the problematic first issue was a result of last minute rewrites is quickly dashed.

Next Issue
Uncanny X-Men #204 puts Nightcrawler in the spotlight, while New Mutants #38 finds the New Mutants living as Hellions, and Beast gets a new (old) look in X-Factor #3.
Newer Post Older Post Home
Posted by Austin Gorton at 9:00 AM