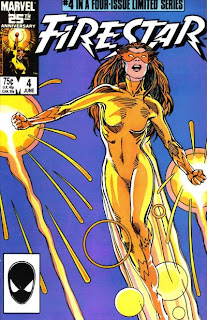 In a Nutshell
The origin of Firestar.

Plot
Issue #1: Angelica Jones is starting at a new school, but despite her efforts to make friends, she is quickly targeted by the popular girls. They continue to torment her throughout the year, culminating in a manifestation of her mutant power which is noticed by both Professor Xavier and the White Queen. After her beloved grandmother dies, Angelica reveals her powers to her father, who worries about what to do with her. He is approached by the White Queen, and agrees to send his daughter to the Massachusetts Academy so she can learn to control her abilities only moments before Professor X arrives. 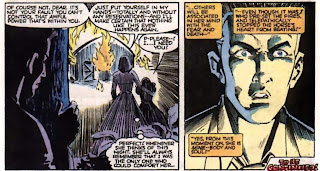 Issue #3: Her training progessing, the White Queen gifts Angelica with a visit home to see her father, accompanied by Randall. When she arrives, her father is clearly still frightened of her, and Randall decides they should return to the school. The next day at the airport, Randall is accosted by a fellow Hellfire Club soldier and held back while other soldiers, in disguise, trigger an anti-mutant riot, forcing Angelica to defend her father by using her powers on another person for the first time. Later, the White Queen reports to Sebastian Shaw that Angelica is progressing nicely, and will soon be ready for her first mission: to kill Selene, the Black Queen.

Issue #4: Angelica saves the White Queen from a sniper she's told was sent by Selene, though in truth the White Queen is merely manipulating Angelica to view Selene as a menace. She invites Angelica to a ball at the Hellfire Club, where she intends for the girl to assassinate Selene. Randall, suspicious, uncovers the truth about the White Queen's intentions for Angelica, but is captured before he can tell Angelica, who is told he's been killed by Selene. However, the night of the ball, Randall escapes, and though fatally injured, is able to tell Angelica the truth. Furious, she confronts the White Queen, overpowering her and making her promise to leave Angelica alone. In the process, Angelica realizes she can control her powers, and always could, then destroys the school's underground complex before leaving. She returns home to her father, confidant and in control.

Firsts and Other Notables
This series essentially serves as the origin of Angelica Jones, aka Firestar, who debuted as one of the titular friends on the TV show Spider-Man and His Amazing Friends in 1981. She subsequently made her first appearance in regular Marvel Universe continuity in Uncanny X-Men #193.This series establishes her back story, including her association with the White Queen and the Hellions.

The Hellions pop up in issue #2, and linger, Empath especially, in the background for the rest of the series, as Firestar is considered one of them, yet the White Queen keeps her separate so as to keep better control over her and prevent her from forming any attachments to the others. 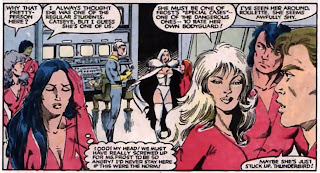 The underground complex beneath the Massachusetts Academy, which functions as the Hellions' training ground and base of operations, is destroyed by Angelica in issue #4, though lip service is quickly paid to the White Queen rebuilding it, and I don't believe it's destruction is ever referenced elsewhere. 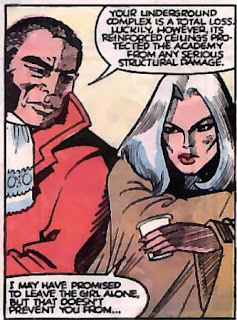 Despite Firestar making her first comic book appearance in X-Men and most of this series centered around her relationship with the White Queen, Tom DeFalco, Jim Shooter's eventual successor as Marvel Editor-in-Chief, writes all four issues of the series, and will eventually put Firestar in the New Warriors, a "next generation" team that will debut during DeFalco's run on Thor. Art comes from Mary Wilshire and Steve Leialoha, and while it is serviceable, both artists have done stronger work elsewhere.

The Chronology Corner
Each issue of this series takes place roughly a year after the previous one, with the first two issues explicitly taking place before Firestar's first appearance in Uncanny X-Men #193. Specifically, the events of issue #1 occur just prior to Uncanny X-Men #168, while issue #2, featuring the New Mutants as well as the X-Men, occurs just prior to New Mutants #18 and Uncanny X-Men #184. DeFalco and/or Wilshire apparently did their homework, as Professor X is shown in his wheelchair in issue #1, yet walking in issue #2, which fits the timeline.

A Work in Progress
Issue #1 offers up an explanation of just how Cerebro detects new mutants. 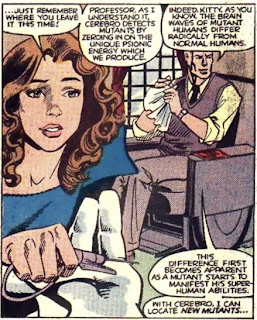 In issue #2, Nightcrawler notes that all the New Mutants seem to have case of puppy love. 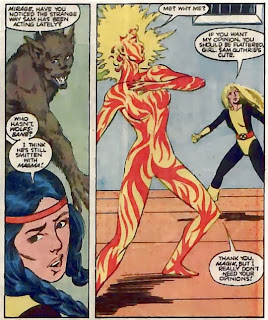 Professor X is so haunted by losing Firestar to the White Queen he hasn't even bothered to mention it until now, months later. 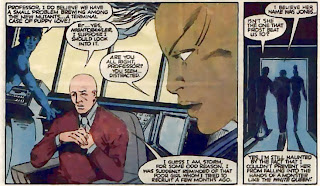 In issue #3, set after Firestar's encounter with the X-Men in X-Men #193, she mentions that Professor X seemed nice when she met him, but that isn't enough to overcome her loyalty to the White Queen, and she continues to view him as an enemy.

By the time issue #4 rolls around, Selene has asserted her power within the Inner Circle of the Hellfire Club such that Sebastian Shaw wants to use Angelica to assassinate her, a plan the White Queen goes along with out of loyalty to Shaw.

In issue #1, Angelica's grandmother points out an "M" that is formed by the lines in her palm, and tells her this marks her as being special. Angelica, eventually realizing other people have a similar mark, comes to equate it with being the mark of a mutant, and the series seems to accept her idea as being correct, though no other series ever seem to suggest that mutants are born with an "M" on their hands marking them as such.

I Love the 80s
Man, only losers don't know about the Treaty of Versailles. Everyone knows it's, like, the coolest international treaty of them all. 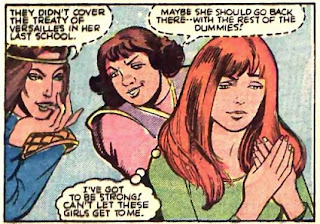 That's some pretty deep snow cover for football season. And that's coming from a Minnesotan.

At the close of issue #4, the White Queen and Sebastian Shaw wonder where Firestar could have gone after she left the Massachusetts Academy. It turns out she went home, which is probably the first place Shaw and the White Queen should have considered. 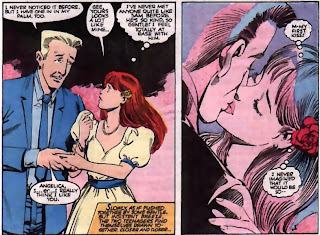 Human/Mutant Relations
Angelica's father does not react well to learning his daughter is a mutant. Later, when Angelica returns home for a visit in issue #3, he avoids touching her and is uncomfortable around her. 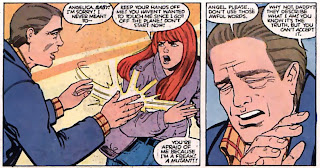 Also in that issue, agents of the White Queen trigger a riot by forcing Angelica to use her powers in public inciting the crowd against mutants. 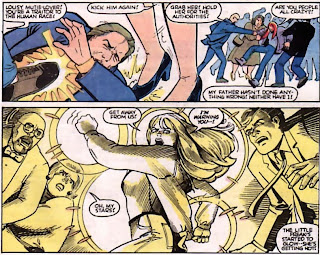 Teebore's Take
This is an odd little series. As mentioned above, Firestar was created for Spider-Man and His Amazing Friends, and this series reads very much like an attempt to introduce her to the comic book Marvel Universe. Yet it appears roughly a year after Firestar's comic book debut in Uncanny X-Men #193, and while I'm fairly certain that Spider-Man and His Amazing Friends was still on the air in some capacity in 1986, one has to wonder why it took Marvel so long to do something significant with the character - if they wanted to capitalize on the success of the show, you'd think they would done so much sooner.

Furthermore, Firestar, in both her first appearance and in this series, is rooted firmly in Chris Claremont's mutant-centric corner of the Marvel Universe, specifically in her interactions with the White Queen and the Hellions, the closest thing the New Mutants have to archenemies at this point. Yet despite that (and despite penning her first comic book appearance) this series is written not by Chris Claremont, but by Tom DeFalco, leading to a White Queen who is far more one dimensional and overtly villainous (manipulating Angelica with glee, threatening to destroy the minds of her flunkies, turning her power on her students when they displease her) than Claremont's contemporaneous story in New Mutants, which does a lot of work to deepen and complicate (in a good way) the White Queen's character, making the whole series feel apart from the very thing into which its trying to fit.

The end result is a miniseries with an unclear purpose (if it's meant to piggyback on the cross-market appeal of the Spider-Man cartoon, it should have come out sooner) that tries to fit itself into the X-Men's corner of the Marvel Universe but doesn't quite make it, and ultimately fails to successfully launch the character (her next sustained appearance will come as part of the New Warriors, three years after this series). While the story and art are acceptable enough (they're about on par with the other limited series of this vintage we've examined, with the exception of something like Longshot), they lack a clear and distinct enough vision to overcome the odd origins and murky aspirations of the series.

Next Issue
Friday, we look at X-Factor Annual #1, followed by a return to the regular series next week, starting with Uncanny X-Men #206.
Newer Post Older Post Home
Posted by Austin Gorton at 1:00 PM