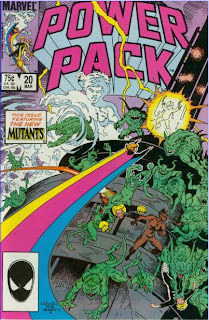 In a Nutshell
The New Mutants help Power Pack stop a demonic invasion.

Plot
In New York City, a group of demons, released from Limbo after the Beyonder removed Illyana's powers, gather ingredients to cast a spell to bring Manhattan to Limbo. Power Pack, visiting their dying mother in the hospital, encounter the demons as they attempt to kidnap a group of babies. Fighting them off and rescuing the infants, Power Pack discovers Kitty Pryde's library card amongst the items the demons dropped. At the X-Mansion, Dani gets a call from Power Pack, checking that Kitty is okay. Believing the demons to be the New Mutants' responsibility, Dani, Sam and Rahne head into the city to help. Before they arrive, the demons return and capture Katie, the youngest Katie, to use in their ritual. 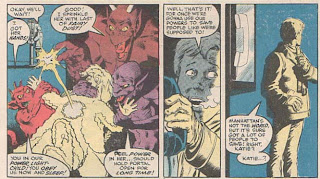 Firsts and Other Notables
This issue picks up the thread from New Mutants #36 regarding the demons accidentally released into Manhattan by the Beyonder's manipulation of Illyana. It guest stars the New Mutants (or, at least, Sam, Rahne and Dani; the rest are said to be Christmas shopping) and ends with the demons defeated and sent back to Limbo. 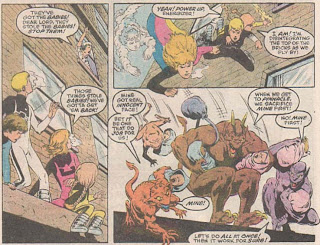 The plot of this issue, involving demons from Limbo kidnapping infants and children in order to facilitate the transfer of Manhattan to Limbo is very similar to one of the plots from "Inferno", the 1989 linewide X-Men crossover.

The issue opens with Power Pack's mother in the hospital as a result of an encounter with Kurse, a Thor villain, in Power Pack #18, which was a Secret Wars II crossover (I believe the Beyonder amped up Kurse's power for whatever reason).

As before, the issue is written by Power Pack co-creator and former X-Men editor Louise Simonson. As she will eventually replace Claremont as the writer of New Mutants, this issue represents her first work with the New Mutant characters. Former New Mutants penciller and co-creator Bob McLeod provides the pencils and inks. Coincidentally, as with the two Alpha Flight issues from yesterday, Mike Mignola provides the cover art (here inked by Terry Austin).

A Work in Progress
As Illyana was inadvertently responsible for loosing the demons, Dani believes it is the New Mutants' responsibility to help Power Pack corral them.

In what is perhaps a metatextual comment, Sam teases that Dani that, in reference to Dani's new status as a Valkyrie, apparently being a mutant just wasn't enough for her. 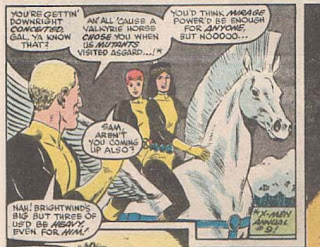 Inviting Power Pack to visit the mansion sometime, Dani refers to Magneto as their new principal. 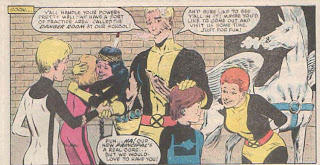 This issue is specifically set at Christmas; I'll leave it to my X-blogging colleague SpaceSquid to determine whether or not that's accurate in the context of the X-Men's timeline.

I Love the 80s
At the mansion, before leaving to help Power Pack, Dani is wearing some pretty stereotypical Native American garb.

Teebore's Take
This is an oddly prescient comic. Not only for featuring Louise Simonson writing the New Mutants for the first time, but also for some specific story beats. The whole "demons attempt to sacrifice children in order to bring Manhattan to Limbo" makes the issue read like an "Inferno" tie-in (where the plot the New Mutants end up most directly involved in deals with demons trying to bring Limbo to Earth) and for the second time (after facing down Hela in New Mutants Special Edition #1), we have Dani using her new Valkyrie powers to fight off an embodiment of death, a trope we haven't seen the last of. Add in the presence of Bob McLeod, the co-creator of the New Mutants, and the end result is an issue that, even though, as with the X-Men in Power Pack #12, the New Mutants are clearly guest stars, still feels like it could have been an issue of New Mutants proper.

Next Issue
Next week, we look at the one shot X-Men: Heroes for Hope #1, following by the return of a certain redhead in Avengers #263 & Fantastic Four #286
Newer Post Older Post Home
Posted by Austin Gorton at 11:00 AM