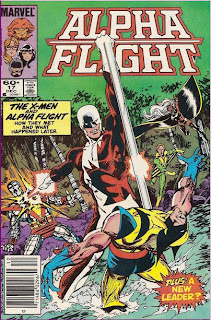 Plot
Wolverine is in Canada, helping his old friend Heather Hudson cope with the death of her husband, James, leader of Alpha Flight. They discuss Wolverine's past defection to the X-Men and how that affected James, as well as James' efforts to retrieve Wolverine for the Canadian government. Heather then tells Wolverine about James' death, and Wolverine tries to convince her she isn't responsible. He says that sometimes dreamers die, but their dreams live on. Together with Alpha Flight member Puck, Wolverine convinces Heather that she can keep James' dream alive by leading Alpha Flight.

Firsts and Other Notables
In the wake of James Hudson's (Guardian nee Vindicator nee Weapon Alpha) death in Alpha Flight #12, this issue sees Wolverine comforting Heather Hudson, and flashes back to just prior to the events of Giant Size X-Men #1, showing the reaction of James and Heather to Wolverine's decision to join the X-Men, as well as the events of X-Men #109 (including several pages reprinted outright from that issue), which depicts those events from the perspective of James.

In this issue, Heather is in the hospital, recovering from wounds she received in Alpha Flight #14. Alpha Flight #16 depicted Wolverine arriving at the hospital in a subplot scene, apologizing for not visiting her sooner, as well as revealing that Wolverine shares a past with Alpha Flight member Puck. This issue elaborates somewhat on that past and depicts their first meeting (having previously only known one another by reputation), making Puck another character on the ever-growing list of people with ties to Wolverine's mysterious and, thus far, largely undisclosed past. 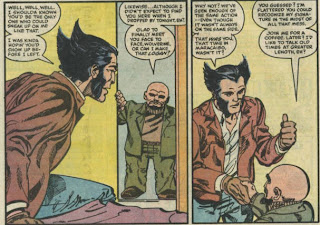 In terms of Alpha Flight continuity, this issue features Heather deciding to follow in her husband's footsteps and lead Alpha Flight, despite lacking any super powered abilities or equipment of her own (she'll eventually acquire her own version of Vindicator's battle suit). Also, Aurora debuts a new look and new powers, though both will be elaborated on more fully in future issues.

A Work in Progress
In a moment of what I assume is odd Canadian pride on the part of John Byrne, James Hudson notes that unlike American heroes, he can wear the Canadian flag, and not just a representation of it. 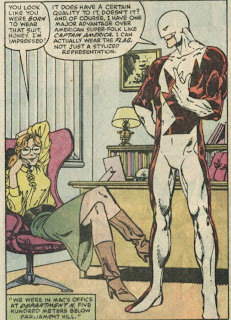 Hudson was apparently responsible for directing Professor X to Department H, where he made the offer to Wolverine to join the X-Men in Giant Size X-Men #1. 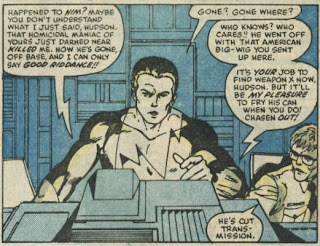 The period of time that passed between Giant Size X-Men #1 and X-Men #109 is here described as being weeks, though it was actually more likely months, which is either a case of Byrne giving it a lot of thought and intentionally sliding the timeline or giving it little thought and going with a general statement of time.

Byrne sneaks in one more jab at the alien Fang costume Wolverine acquired in X-Men #107 (and was intended by then-X-Men artist Dave Cockrum to be Wolverine's new regular look) via a panel set during the events X-Men #109. 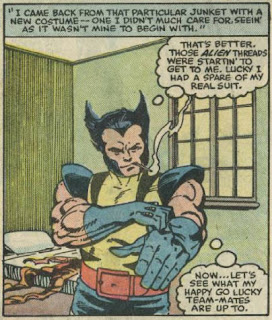 During the expanded flashback to the events of that issue, it's revealed that Weapon Alpha escaped from the X-Men in that issue by putting himself at rest relative to the Earth's rotation, allowing him to suddenly fly over a thousand miles per hour, moving so quickly he appeared to the X-Men to have disappeared. 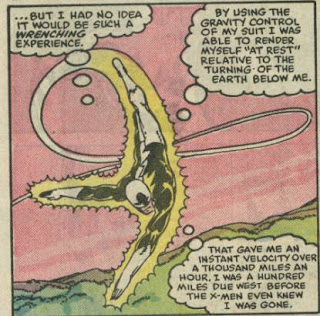 He also mentions that, in light of accidentally injuring Moira, he now has something to "vindicate", a retroactive setup for his change in codenames from Weapon Alpha to Vindicator (which he then dropped in favor of "Guardian" in Alpha Flight #2).

The Best There is at What He Does
Hudson notes that Wolverine isn't cut out for leadership, echoing recent sentiments from Wolverine himself. 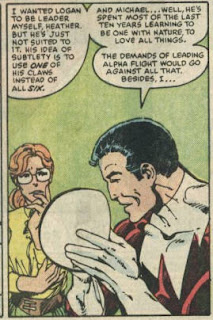 As in X-Men #120 and 121, it's noted that the Canadian government has spent a lot of money on Wolverine, continuing to suggest they're responsible for his adamantium skeleton and claws, though it will eventually be revealed to be a bit more complicated than that.

Teebore's Take
From the perspective of X-Men readers, Wolverine's guest appearance in this issue is significant for the way it continues to both soften and deepen the character, focusing as it does on his past with the Hudsons and depicting him in the present as a comforting figure willing to give Heather the tough love she needs to help get over the death of her husband. It's also notable for providing an opportunity to view then-present day John Byrne art (who wrote, penciled and inked the original art in this issue) alongside vintage Byrne art from X-Men #109 (which was then inked by Terry Austin). The contrast isn't as striking as it would be if Byrne's present day art was being used as the point of a comparison, but his more minimalist, less-detailed style when inking himself is nevertheless apparent even when comparing Byrne '84 to Byrne '77. 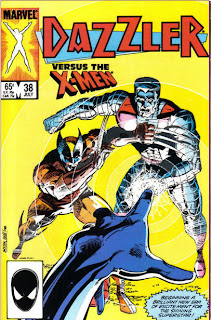 Plot
Dazzler approaches the X-Men for additional training in the use of her powers, determined to become a better superhero. All save Wolverine buy her conviction, and after weeks of training, is granted a place on the team. She declines, but in an effort to win over Wolverine, offers up a final test: a surprise trial by combat at a time and place of Wolverine's choosing. Later, Wolverine and a reluctant Colossus attack Dazzler in accordance with the test, but she holds her own, neutralizing Colossus and injuring Wolverine. However, Wolverine is determined to keep fighting until Cyclops, on hand to provide Dazzler with additional training, intervenes. Though Wolverine still has his doubts, Dazzler feels she's proven herself.

Firsts and Other Notables
Dazzler gets a new costume in this issue, one designed by Professor X which is meant to help store and focus her light energy. It's more or less the same costume she will wear after she joins the X-Men. 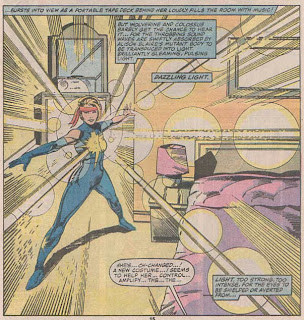 This issue marks a new direction for Dazzler's solo series, one in which she acts more proactively as a superhero, though it will be short-lived, as her series ends with issue #42 (although the book is bi-monthly at this time, so while that's only four issues away it's also eight months away).

The bounty hunter O.Z. Chase and his dog Cerberus appear for the first time; they will remain fixtures of this series for its duration, and feature in a future issue of X-Men. 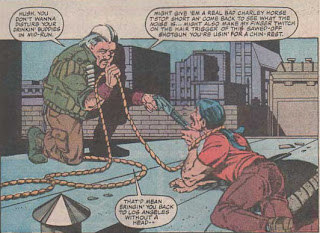 Following her training with the X-Men in this issue, Dazzler's offered a place on the team, but declines, believing that her recent outing as a mutant and place in the public spotlight would threaten the X-Men's secrecy.

Cyclops drops in for a few panels, taking a break from his life in Alaska at Xavier's urging to help Dazzler fine tune control of her laser blasts. 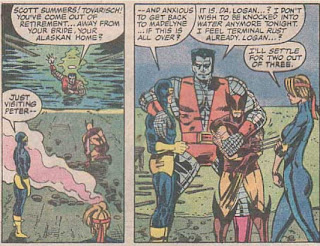 Paul Chadwick, a former Hollywood storyboard artist, most famous for his work as the creator of the comic book series Concrete, provides the art; he will remain the regular artist on Dazzler until its cancellation.

The Chronology Corner
The X-Men appear here following X-Men Annual #8. Dazzler will go on from this issue to guest star in New Mutants #29, then Secret Wars II #1, then New Mutants #30 and #31, all before the next issue of her series.

Wolverine, Colossus and Rogue appear in the 1989 graphic novel Wolverine/Nick Fury: The Scorpio Connection following this issue, then they and the rest of the X-Men (including Cyclops) are in the X-Men/Alpha Flight limited series.

A Work in Progress
Colossus inexplicably alternates costumes between pages of this issue, starting out in a variation of his classic look before appearing in his more current (and recently discarded) "himbo" costume (as seen on the cover of the issue).

Cyclops refers to his optic blast as his "uni beam", something it hasn't been called since the Silver Age, if ever.

I Love the 80s
Nightcrawler suggests that Wolverine doesn't like Dazzler because she hassles him about smoking, another reminder that Wolverine smokes like a chimney at this time. 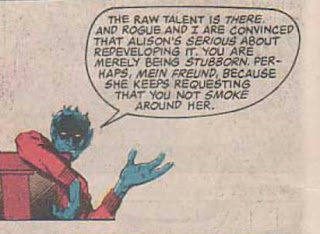 The plot of this issue essentially centers around Wolverine and Colossus sneaking up on and attacking Dazzler as means of testing her newly-honed superhero skills. She vows that no innocents will be harmed, while Wolverine assures her that the X-Men will immediately bug out, and she'll have failed the test, the moment there's even a hint of innocents being endangered. Yet the subsequent "test" between Dazzler and the X-Men results in a fair amount of property damage, all of which passes without comment. 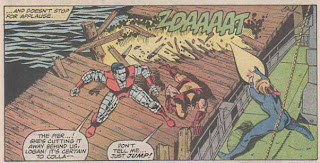 Human/Mutant Relations
Wolverine blames Dazzler for fanning the flames of anti-mutant hysteria by outing herself. 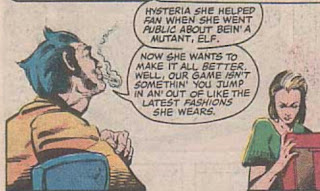 Teebore's Take
The X-Men are very much guest stars in this issue, literally brought in to increase the skills of the main protagonist and, ultimately, make her look good. They are also, in true guest star fashion, clearly meant to goose the sales of the book, as Marvel was likely hoping to use their burgeoning mutant superstars to put some new eyes on the first issue of the new direction for a struggling book. Ultimately, that effort will prove fruitless, as Dazzler is not long for the world at this point, but while this is perhaps Marvel's most overtly-commercial use of the X-Men as guest stars yet, Dazzler's interactions with the characters in this issue are nevertheless a neat little piece of the X-narrative, adding a little background and context to her eventual acceptance of a place on the team for anyone who's read this issue.

Next Issue
Tomorrow, we look at the X-Men and Alpha Flight limited series, and next week, things go back to "normal" with Uncanny X-Men #193.
Newer Post Older Post Home
Posted by Austin Gorton at 10:00 AM