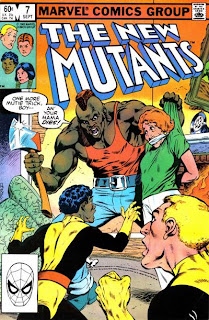 In a Nutshell
The New Mutants rescue Sunspot's mom from the Hellfire Club.

Plot
Days after the explosion of Viper's base, the New Mutants and the X-Men continue to search for some sign of Karma. When Roberto's mother, Nina DaCosta, an archaeologist, arrives at the X-Men's camp, Professor X declares he's sending the team to accompany Nina on a trip to the headwaters of the Amazon. Though the New Mutants are reluctant to give up on the search, Professor X explains to the X-Men that he believes Karma is alive, but in light of the malevolent psychic entity he sensed, he won't risk the New Mutants encountering it while searching for Karma. A week later the New Mutants arrive at Roberto's lavish home in Rio De Janiero and suffer through a tense dinner in which Nina and Roberto's father Emmanuel snipe at each other. The next morning, the New Mutants accompany Nina into the city for Carnival, but Nina is captured by a group of Hellfire Club soldiers led by a mutant named Axe. 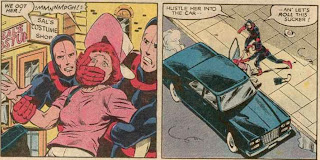 However, Wolfsbane is able to track the kidnappers to an abandoned mansion. Working together, Dani and Wolfsbane manage to knock out the Hellfire Club soldiers while Cannonball rescues Nina and Sunspot defeats Axe. A few days later, Nina and the kids depart for their trip. Unknown to them, they are being watched by Emmanuel and Sebastian Shaw, the later having sent Axe to kidnap Nina at Emmanuel's request. In light of the Hellfire Club's failure, Emmanuel decides to take matters into his own hands, and assures Shaw that his wife's expedition won't reach its goal, even if it means the death of his wife and son.

Firsts and Other Notables
In the wake of last issue's cliffhanger, Karma has gone missing and is presumed dead by the New Mutants, marking her departure from the team and absence from the book for the foreseeable future, though we'll eventually learn she survived the explosions and what exactly happened to her during her absence. 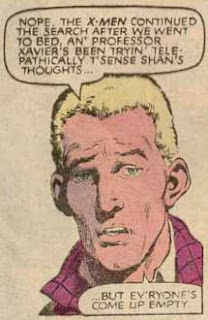 Professor X tells the X-Men he's sending the New Mutants away in part to protect them from the malevolent telepathic entity that was released last issue; again, this is a reference to the Shadow King, which we'll discover when Karma resurfaces. 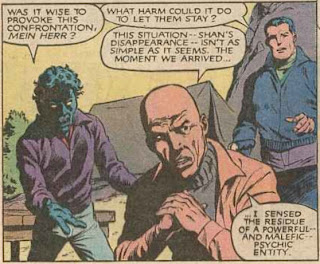 This is the last issue to use the codename "Psyche" for Dani; she'll eventually adopt the name Mirage, though she'll go simply by Dani until then.

This is the first appearance of both Axe, a super-powered Mr. T parody who uses, well, an axe, and Sunspot's mother. Though Axe will appear in a later issue and Mrs. DaCosta sticks around for the duration of this story, neither are terribly significant characters (and despite Axe's use of the derogatory term "mutie" on the cover, he is, in fact, a mutant himself). 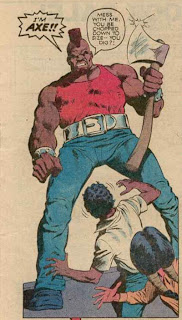 This issue occurs just prior to the X-Men's trip to Japan in X-Men #172, as they are seen helping search for Karma while Wolverine is still absent.

A Work in Progress
The heads in the corner box are, though not quite reacting to the events of the cover, not the usual static images, and Karma has been removed from the group.

Rahne refers to Nightcrawler as "the demon", echoing Kitty's early reactions to him and his fears from X-Men #167 that the New Mutants may have a hard time accepting his appearance.

The New Mutants all try on costumes in Rio, which serves as nice little character moment for each of them. 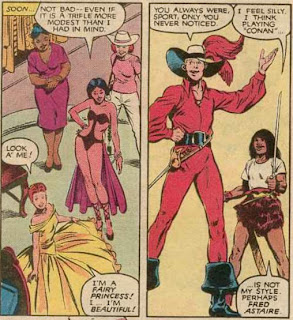 Roberto's father Emmanuel is shown to be in cahoots with Sebastian Shaw, having asked Shaw to kidnap his wife as a show of power to convince Emmanuel to join the Hellfire Club.

I Love the 80s
For some reason, the word "dig" appears in quotations, suggesting it's some kind of slang term unfamiliar to general audiences at this time. 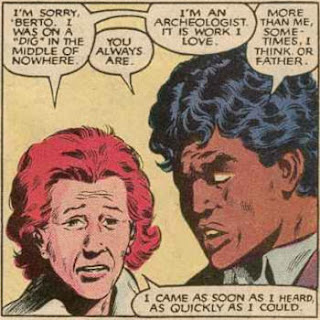 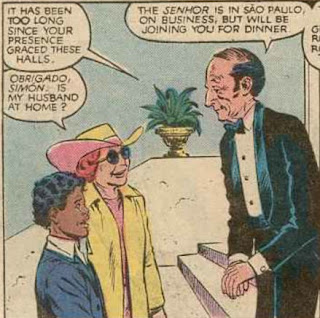 Sam says that he's "pretty much invulnerable" when blasting; almost "nigh-invulnerable" but not quite there yet.

"Professor Xavier is a Jerk!"
Professor X pisses off the New Mutants by sending them away to Brazil instead of allowing them to search for Karma, and though he has a legitimate reason for doing so, he doesn't see fit to inform the New Mutants of his reasoning. 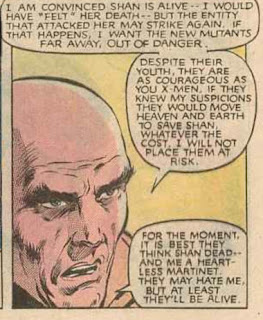 They're Students, Not Superheroes
Professor X sends the team on a field trip with Roberto's mom specifically to get them out of the line of fire, but of course they end up foiling a kidnapping plot (and the field trip leads to the adventures that unfold in the next several issues).

My Hero, Thomas Magnum
The plan the New Mutants execute to rescue Roberto's mother is inspired by Thomas Magnum. 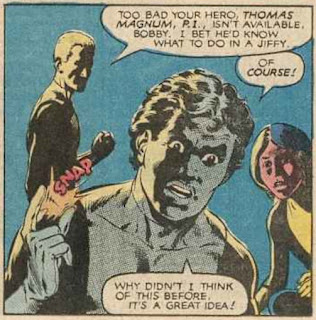 Teebore's Take
This issue ostensibly kicks off what will turn out to be the fairly lengthy "Nova Roma" arc, New Mutants first multi-part storyline. But in terms of that storyline, this issue is mainly setup, dealing with the fallout from the end of last issue and getting the New Mutants to Brazil while telling the sort of done-in-one story that has characterized many of this series' early issues. As such, it serves as a nice touchstone for the series heading into its first protracted story arc, mimicking as it does the plot of the New Mutants first appearance (rescuing someone from the Hellfire Club) and touching on some of the plot threads left dangling from that story (like Roberto reacting to the death of his girlfriend). Axe is a pretty obvious Mr. T riff, but thankfully, he's much less integral to the story than Team America was in the last two issues, serving more as a generic goon, making his appearance feel less dated and thus allowing the issue to stand on its own. That said, while there's some interesting plot threads happening on the margins (the continued involvement of the Hellfire Club in the book, Professor X continuing to be a harsh taskmaster), nothing here is terribly exciting.

Next Issue
In Uncanny X-Men #172, Wolverine and Rogue go toe-to-toe with Viper and Silver Samurai, and then in New Mutants #8 the team meets a new friend in the Amazon.
Newer Post Older Post Home
Posted by Austin Gorton at 8:00 AM