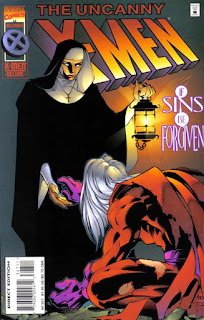 In a Nutshell
An amnesiac Magneto stumbles across an orphanage and is given the name Joseph.

Plot
A mysterious man stumbles across an orphanage, speaking German & displaying magnetic powers before falling unconscious. Later, he awakens and is tended to by Sister Maria, caretaker of the orphanage. As the man reveals he has amnesia tells him he can stay until he is well enough to travel. He is christened Joseph by one of the children. Time passes, and having grown fond of the children, he remains at the orphanage, helping work the land and look after the kids. Eventually, word of his mutant abilities reaches Colonel Ramos, who is eager to have a mutant's power at his disposal to further his criminal efforts. To that end, he has Sister Maria and the children kidnapped, to be used as leverage to coerce Joseph's cooperation. It doesn't work, however, as Joseph uses his power to force the location of the captives from Ramos. Joseph then goes to an old church where Maria and the children are being held in the basement. Sister Maria knows Joseph has come to save them, but when they emerge from the basement, they are shocked by the horror Joseph visited upon their captors. Seeing their disappointment in him, Joseph decides to leave the next morning, with Maria pointing him towards the X-Men as a potential place where he could find a home. Later, Maria recounts the tale of Joseph to Father Heclio, wondering if she has loosed the villain Magneto out into the world. Helcio responds that perhaps instead, she has given him the faith he needs to use his power to help humanity. All they can do now is pray that he finds his place in the world, and that the place is on the side of the angels.

Firsts and Other Notables
Following a brief cameo appearance in X-Men #46, this issue marks the first full appearance of Joseph. Initially intended to be (and presented here as) Magneto, still amnesiac following the Xavier mind-wipe in X-Men #25 and mysteriously de-aged, the character will eventually be revealed to be a younger clone of Magneto created as an act of revenge by Astra, a theretofore unknown member of the original Brotherhood of Evil Mutants. At the time, Joseph was presumably an attempt by the creators to play around with a more heroic version of Magneto (and, specifically, to recapture some of the spirit of the heroic Magneto from "Age of Apocalypse" and his relationship there with Rogue). He is effectively presented as the real deal until issue #350 reveals that the actual Magneto is still around (thereby creating the question of who or what Joseph is, which lasts until the whole clone reveal in "Magneto War"). 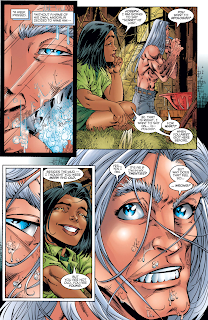 As far as I know, during the time when everyone was still acting like Joseph was Magneto, no explanation was ever given as to how he got de-aged, a question that gets raised here in his first appearance.

Roger Cruz, having fully completed his transformation into a Joe Madureira mimic, fills in on this issue, Madureira having apparently exhausted himself drawing two consecutive issues.

A Work in Progress
It's not stated here, but issue #345 will establish that this story takes place in Guatemala. 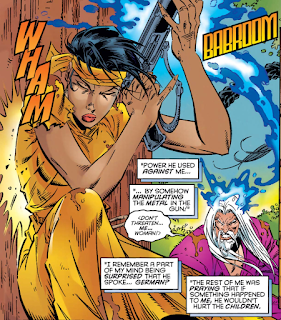 Sister Maria has an old copy of Time magazine, with the Silver Age X-Men on the cover, which prompts her to point Joseph in the direction of the X-Men. 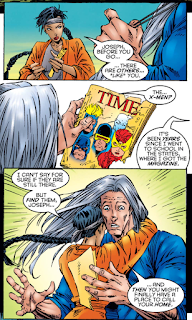 In a great bit of characterization, when the children ask Joseph to assure them he’ll protect them, he unequivocally answers yes. It's a subtle bit, but it highlights one of the differences between Magneto and, say, Xavier, who likely would have hedged his response, recognizing he can't realistically guarantee the children's safety without any caveats and it's not fair to promise them otherwise. But Magneto is just like "yes, I will protect you no matter what" (which of course then further fuels his rage when he's proven wrong). 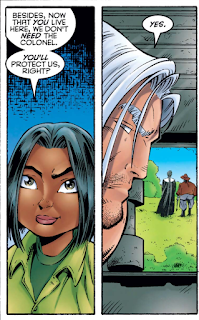 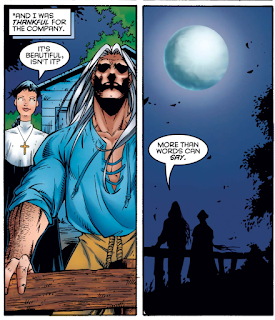 Artistic Achievements
A narrative caption describes a barn as burned to the ground even as the art shows it still standing.

Austin's Analysis
Hindsight makes this a tricky issue to evaluate: the Joseph retcon is one of the more hamfisted & inelegant retcons in a complex serial narrative with no shortage of retcons, and it's also one of the better examples of the shortcomings in Scott Lobdell's "throw out an idea and make up the rest as you go along" style of plotting, as it becomes clear pretty early that no one is quite clear what to do with the character before later writers come up with the retcon & shuffle him off the board. But putting aside the "Joseph" of it all, this is not a bad issue. In fact, it's ultimately a pretty decent character study of Magneto, one which, via a fairly standard plot, reaffirms one of the core tenants of the character: he is someone willing to do wrong things in the pursuit of something right.

Variations on this kind of Magneto story, in which the character ultimately crosses a line while trying to protect/avenge the innocent shows up a lot (it's a favorite device of the X-Men films, especially), but given that the last we saw a fully conscious Magneto (in this universe/timeline, at least), he was ripping the adamantium out of Wolverine's body, the telling of it here seems like an attempt to re-establish Magneto as a somewhat more nuanced character, at least respective to some of his "Fatal Attractions" appearances, someone with a genuine desire to protect the downtrodden, even as he all too easily reaches for extreme measures to do so. It's not quite Chris Claremont's Magneto, but it is much closer to that (and, of even more relevance for the time, much closer to the "Age of Apocalypse" depiction of the character) than the guy who crashed Illyana's funeral and murdered one of his own followers in cold blood. That this "restart" for the character eventually spins out before going off the rails entirely shouldn't, as much as is possible, be held against this issue, which accomplishes what it sets out to do quite well.

Next Issue
Tomorrow, Howard Mackie's return to the events of "Fall of the Mutants" begins in X-Factor #117. Friday, Nate Grey meets Professor X in X-Man #10. Next week, more X-Baby shenanigans in X-Men (vol. 2) #47!