In a Nutshell
Cable & Domino fight in the future to save Cable's past.

Plot
Cable & Jenskot arrive in the future, on the outskirts of Stryfe's camp, and are soon joined by Domino, who was sent there by Blaquesmith. Jenskot proceeds to lead them through Stryfe's camp and into the Askani camp, where they meet with Blaquesmith and learn they are needed to help save the young Dayspring - Cable's past self - from a telepathic assault by Stryfe. Meanwhile, Stryfe tortures the captured Tetherblood for information about the strange glowing orb he's captured from the Askani, but Tetherblood remains silent. Back at the Askani camp, Domino talks with Blaquesmith, and decides his future self must have sent her here in order to do what Cable couldn't: kill Stryfe and end their cycle of violence. She steels away to Stryfe's camp, and when Cable notices she's missing, he goes after her. He stops her from killing Stryfe, but draws the attention of Stryfe's forces in the process. Jenskot leads a force of Askani to distract them, allowing Cable & Domino to get into Stryfe's tent and find Tetherblood as well as the glowing orb, which Cable recognizes as Professor. With its help, Cable is able to bodyslide the four of them back to the Askani camp, where he places Professor inside Dayspring, ensuring his survival. Later, Cable sadly bids goodbye to Jenskot, then he & Domino are sent back in time, their mission complete, as Dayspring rallies to continue his fight against Stryfe.

Firsts and Other Notables
A celebration of Cable's 25th issue (for what that is worth), this story takes place in the far future (relative to the present day), at a point where Cable & Stryfe are in their late teens/early 20s. Apocalypse is dead (following the events of The Adventures of Cyclops & Phoenix), and Stryfe is carving out his own empire while coming into conflict with Cable's Clan Chosen (which seems to be the military wing of the Askani at this point).

Cable (the younger version) is being psychically attacked by Stryfe ahead of what is destined to be a pivotal battle between their forces, and it takes the efforts of the older Cable to integrate his younger self with the Professor (the lingering sentience of Ship, who went into the future with baby Cable back in X-Factor #68, and who will later serve as the operating system of Cable's space station Graymalkin, eventually leading to the Professor gaining a body and going off to explore space as Prosh, as seen in X-Force #39), represented here as a glowing green orb in a bottle. 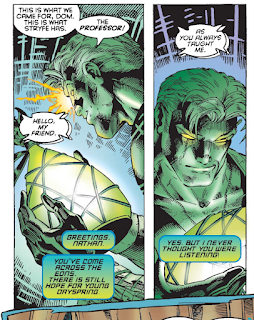 The actual pivotal battle between young Cable & Stryfe is only depicted via the issue's closing page, leaving most of it to occur off-panel. 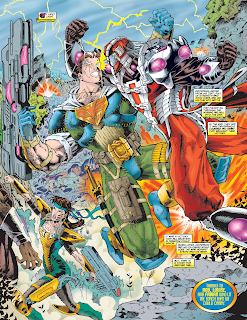 When the younger version of Blaquesmith in the future sends Cable & Domino back to the present day, he refers to Cable as "Askani'son" using the font from the logo of the upcoming limited series of the same name. 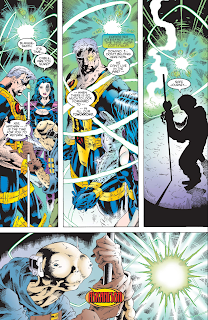 Being the 25th issue of a series published in the mid-90s, this is a double-sized issue with a quadruple fold out, cardstock, holofoil-enhanced cover.

A Work in Progress
It’s mentioned here that Jenskot (a name derives from a quasi portmanteau of Jean and Scott) is a chosen name (more akin to a codename), not a birth name. 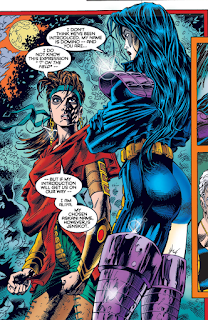 Also, Jenskot seems to have forgotten that Cable is the future version of Nathan Dayspring (which she realized last issue).

A younger Stryfe appears in this story, wearing a proto version of his signature armor. 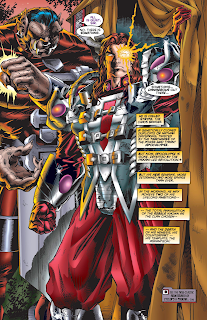 Cable gives Domino a lesson in time travel and how trying to make things better usually just makes them worse. 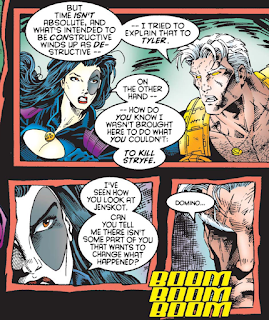 There’s a subplot involving a traitor within the Clan Chosen. Shockingly, it turns out to be the newly-introduced character with whom Adult Cable is unfamiliar. 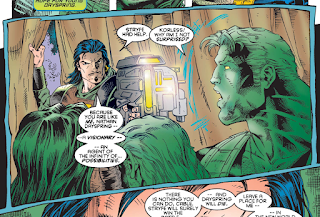 Austin's Analysis
Story-wise, one's patience for this is likely tied to how much one cares about Cable's past (in the future...) and the various far-future conflicts & relationships between the Askani, Clan Chosen, Apocalypse & Stryfe, as this issue presents the series' first extended look at that era since its earliest issues. There's something admirable in the fact that Loeb doesn't actually depict the big important battle between young Cable & Stryfe (the events of this issue taking place on the night before it), ignoring the impulse to have a time-tossed Cable & Domino play and even more direct role in young Cable's development than they're already doing, but at the same time, it also means not a lot actually happens in this issue, as Cable, Domino & Jenskot wander around a jungle and in and out of various camps, while Cable mourns Jenskot's eventual death and Domino is mildly jealous (though again, to Loeb's credit, not unreasonably so).

It's a worthy endeavor on Loeb's part to graft all the future trappings and talk of destiny and glowing orbs in bottles to something more character-driven & relatable, with Cable eventually letting go of the past that was, in favor of the future before him, but Scott Lobdell did a much better job of grounding all the futuristic high sci-fi nonsense in characterization in the similarly-set Adventures of Cyclops & Phoenix mini. Still, this could have been much worse - one needs only look at the series' earliest issues to see that - as at the very least, the central characters of this story remain characters readers ostensibly care about in the here and now.

Next Issue
Next week, a Guthrie family reunion in Uncanny X-Men '95!