The Moral of the Story
You can change who you are, but you cannot run from yourself.

Plot
Brought before the Pykes, Ahsoka offers a deal: set the Martez sisters free to retrieve the missing spice, and Ahsoka will remain behind; if the sisters don't come back, Ahsoka will give the Pykes info on their family to use as leverage. They agree, and the Martez sisters are released. Trace believes Ahsoka is sacrificing herself for them, since they have no family to be used as leverage, but Rafa, not wanting to be one-upped, vows to return with spice and free Ahsoka. Meanwhile, Ahsoka uses the Force to escape from her cell and sets out to plant charges in the Pyke's spice processing facilities. She overhears a conversation between the Pykes & Maul, and tracing the transmission to Mandalore, she gets recaptured & exposed as a Jedi in the process. Elsewhere, Trace & Rafa arrive at a Pyke loading facility, and fight the Trandoshan manager there in order to make off with a replacement spice shipment. They return to Oba Diah and are brought before Marg Krim, who reveals Ahsoka as a Jedi. Just then, the charges she set exploded, which she and the Martez sisters use as cover to escape. As they fight their way off the planet, Ahsoka explains how she left the Jedi Order, and when the three return to Coruscant, they are on friendly terms. Just then, Bo-Katan enters Trace's workshop, having followed them from Oba Diah, and says she needs Ahsoka's help to take down Maul. Ahsoka is reluctant, but Trace says she needs to help the Mandalorians just as she helped them, and Ahsoka ultimately agrees, leaving her bike with Trace, just in case, before boarding the Mandalorians' ship.

Firsts and Other Notables
This episode reveals (formerly Darth) Maul as the force behind the Pyke Syndicate, something not terribly shocking given the way he forged the various criminal factions into the larger Shadow Collective e under his leadership earlier in the series, but still, an effective way to reintroduce the character ahead of the larger role he'll play in the forthcoming "Siege of Mandalore" arc.

Maul also name-drops Crimson Dawn, the criminal organization that featured heavily in Solo (which he was also secretly running).

Did You See?
The manager of the spice loading facility with which Rafa fought was Trandoshan, the same species as the bounty hunter Bossk (a trio of Trandoshans also ambushed the Mandalorian at the start of the second episode of his series).

The other dock workers were all Toongs, members of the same species as the hapless podracer Ben Quadinaros.

The same model of craft flown by the Mandalorians in this appeared appeared amongst the ad hoc Resistance fleet on Exegol at the end of Rise of Skywalker. 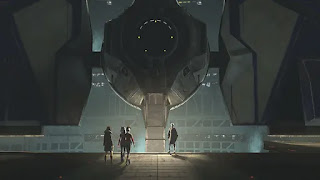 Austin's Analysis
Even by the relatively low standards of this arc, this episode is a mixed bag. It certainly has its moments: Ahsoka sneaking through the Pyke facility, the encounter with Maul, the battle to escape Oba Diah. And both Trace & Rafa remain engaging characters and good foils for Ahsoka (Rafa's insistence on not taking the opportunity afforded by Ahsoka's ruse on account of her not wanting to let Ahsoka be the heroic good guy was pretty great). But a lot of it was also very muddled. The fight between Rafa, Trace and the loading dock goons was fine, on its own, but felt like filler in the context of the story (they could have just as easily pulled off their initial ruse and flown back without anything in the rest of the episode changing). The reveal of Ahsoka's Jedi heritage to the Martez sisters was the equivalent of a dramatic shrug (I appreciate that they were ultimately reasonable in accepting both her past and her keeping it secret from, and that they were, most of all, flabbergasted that anyone would willingly walk away from the Jedi Order, but the actual reveal was robbed of much of its potential drama). And its hard not to feel like everything which happened in this episode, could have happened in the previous one (making the last episode even more of a circular time suck). Even the title is muddied: who is together again? Ahsoka and the Martez sisters? Ahsoka and the Mandalorians? And Maul?

All in all, its hard not to label this entire arc a disappointment. Trace & Rafa are characters I wouldn't mind seeing again (or finding out what happens to them), and the moments where Ahsoka is struggling to find her sense of self are interesting. But too much of it felt like filler (especially disappointing at this point in the series' run), both in terms of plot and character development (for all that these episode were a journey for Ahsoka, she's not that much different at the end from where she started) and too many of the big emotional beats were sidestepped or downplayed (like the reveal of the Martez' parents fate to Ahsoka, or Ahsoka former role as a Jedi). With Ahsoka now reintroduced and, however reluctantly, on her way back to Mandalore and the larger galactic stage, hopefully the series is poised to end on a more triumphant bang.