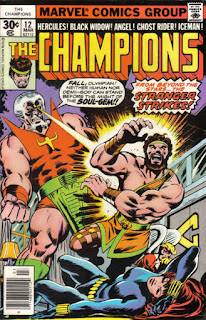 In a Nutshell
The Champions battle Stilt-Man, then the Stranger.

Plot
The Champions return to their headquarters in the midst of a battle between Black Goliath and Stilt-Man, who is seeking the strange glowing box brought inside by a young woman. The Champions help drive Stilt-Man into a retreat, and while Black Goliath pursues him further, they meet with the woman, Regina Clayborne. As she tells them how she came into possession of the box, the cosmic Stranger suddenly appears. Taking his appearance as an attack, the Champions leap into action. As they battle the Stranger, the glowing box increases in size, absorbing Regina and part of the Stranger, prompting him to end the fight. He explains that the box contains the Null-Life Bomb, a weapon which threatens the entire universe, as it is designed to absorb all existence before exploding & destroying everything. As the bomb increases in size, the Stranger, who says he came to Earth to stop the weapon, teleports the Champions away to collect the only object capable of destroying the bomb. Moments later, they find themselves in the realm of Kamo Tharn, who bears a grudge against Hercules and vows his revenge!