Plot
Held captive by the Pyke Syndicate, Ahsoka learns how Rafa & Trace were orphaned after a battle involving the Jedi & Ziro the Hutt on Coruscant, a revelation which shakes Ahsoka. Later, Rafa is taken away to be tortured for information on the whereabouts of the spice they dumped, and after her, Trace is led away as well. But Trace manages to break free, and as she leads the guards on a chase through the prison, Ahsoka uses the Force to escape her cell with Rafa. Together, the three women get out of the prison complex and into the surrounding city, as they are unknowingly watched by a trio of Mandalorians,. Eventually, Trace spots her impounded ship on a landing platform but they are spotted by their pursuers before they can get to the ship, and Rafa & Trace are recaptured. Ahsoka remains free and doubles back to free them, but is forced to act too early when the Pykes threaten to kill the sisters. This leads to Ahsoka being recaptured as well, and all three end up back in their cell where they started.

Firsts and Other Notables
One of the more notable happenings in this episode is the reveal that the Martez sisters have some personal animosity towards the Jedi, as a result of their involvement in an incident which led to the death of Trace & Rafa's parents (as a result of the Jedi trying to minimize the loss of life and either being ignorant of the full ramifications of their actions or choosing a lesser of two evils which still had a tremendous impact on the sister's lives).

The other notable thing is the appearance of three Mandalorians on Oba Diah who are seemingly watching Ahsoka (or at least their attention is caught by her); they're presence will presumably lead into some setup for the series final "Siege of Mandalore" arc. Of the three, two are identifiable: one is Bo Katan (voiced by Katie Sackhoff), whom encountered Ahsoka in season four, episode fourteen (which is the incident on Carlac she mentions here). Katan is the sister of Duchess Satine (former leader of Mandalore & one-time paramour of Obi-Wan), and also appeared in Rebels, where she ended up wielding the Darksaber (which later turns up in The Mandalorian) and becoming the leader of Mandalore herself.

The other is Ursa Wren, mother of Sabine Wren from Rebels. Ursa previously appeared in that series; this is her first Clone Wars appearance.

A Work in Progress
The incident involving the Jedi and the escaped Ziro the Hutt which led to the death of the Martez sisters' parents occurred in the episode "Hunt for Ziro", the finale of the first season; the bunty hounter Cad Bane is the red-eyed alien they referenced in their recollection.

The "green-skinned" Jedi who met with the newly-orphaned sisters (to offer them little more than the Jedi version of "thoughts & prayers" in the wake of their parents' deaths) was likely Luminara Unduli, who was the master of Bariss Offee, the Padawan who would go on to frame Ahsoka for murder, leading to Ahsoka's departure from the order.

The droid conducting the torture on the Martez sisters is the same (or similar) modeal as 8D8, the torture droid seen in Jabba's palace in Return of the Jedi. 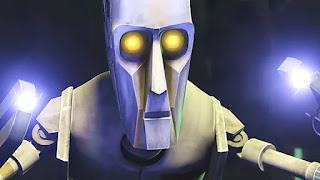 Did You See?
A number of background figures in this episode, including an Ithorian/Hammerhead and a Snaggletooth, are visually based on their respective species' vintage Kenner action figure representatives. 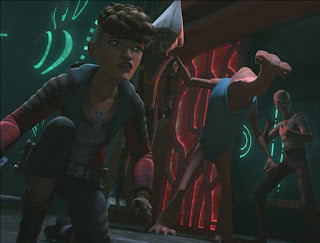 Austin's Analysis
The Ahsoka/Martez sister's arc continues to improve, with an action-heavy episode that still continues to develop the characters, fleshing out the sister's backstory and giving Ahsoka more insight into how they approach life & what motivates their decisions. More importantly, this episode significantly steps up the process of widening Ahsoka's understanding of the world (and, in the process, making some somewhat subtle contributions to the larger arc of the series, continuing to show us how "the other half" views the Jedi (not well, it often seems), thereby laying groundwork for the ease of Palpatine's rise, the near-extinction of the Jedi and the disappearance of their culture from society as a whole, at least on a societal level).

This is far from perfect - the dialogue remains fairly bland, and Ahsoka's reaction to the Martez sisters' tale is far too understated (in part because she still remains at a remove from the action - it's clear the two sisters are meant to reflect the different impulses pulling at Ahsoka post-Jedi Order, but the story has yet to really find a way to ground that conflict in any meaningful actions). And of course, its a highly questionable choice to end the episode exactly where it began, with all three heroes back in their jail cell. But ultimately, if Ahsoka's arc this season is about finding a way to do good outside the parameters of a "good" institution, this episode, both in the way it forces her to see the Jedi in another light (independent of both her earlier raised-from-birth indoctrination & her sense of personal betrayal at their hands) while also testing her adherence to the spirit, if not the letter, of Jedi teachings about still helping others, at least does something to advance her down that path.