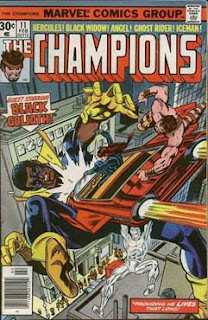 "The Shadow From the Stars"
February 1977

In a Nutshell
John Byrne comes aboard as the Champions battle aliens in the desert!

Plot
The Champions try out their new "Champscraft" vehicle, only to have it experience mechanical issues and threaten to crash. Thankfully, Black Goliath, sent over to check on the vehicle by the manufacturer, is on hand to prevent further damage. As they discuss the near-accident, Darkstar arrives and reveals that Nick Fiury has made arrangements to allow her to stay in the country. Meanwhile, Ghost Rider is traveling through Arizona and runs into some ranchers who are being helped by Hawkeye & Two-Gun Kid. Suddenly, the group sees what appears to be a flying saucer in the distance. Back at the Champions headquarters, Black Goliath helps fix the Champscraft, just as the team hears of the disturbance in Arizona. In Arizona, the superheroes have learned the ranchers are being attacked by the alien Warlord Kaa and his shadow soldiers. Working with the newly-arrived Champions, including Darkstar, the heroes are able to drive off Kaa and his forces. Just then, Black Goliath contacts the team, saying that a woman has showed up at their headquarters with a glowing box that was stolen from his lab last week, and that Stilt-Man has shown up as well, demanding the box in order to become master of the world!