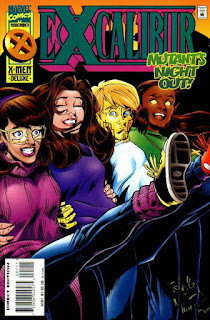 In a Nutshell
Excalibur goes out for a night of drinking

Plot
Kitty & Pete Wisdom round up their teammates for a night on the town, and Moira brings them to a nearby pub that was once owned by her father. As the drinks begin to flow, much is made of the blossoming relationship between Kitty & Wisdom, and Kurt ultimately agrees to let Wisdom remain with the team. Eventually, Moira, Amanda, Meggan & Rahne end up dancing a chorus line atop one of the tables, and the various couples end up making out. Later, a deeply-intoxicated Moira admits that she drank to forget her problems, and the team stumbles home. After they arrive, Kitty & Wisdom stop & embrace in the moonlight, unaware that Colossus has just arrived on Muir Island.

Firsts and Other Notables
This is the mildly-famous "pub" issue of the series, a character-driven tale centered around the team going out for drinks at a nearby watering hole.

Colossus, last seen in Uncanny X-Men #325 after the fall of Avalon and the end (for now) of the Acolytes), shows up on the final page, just in time to see Wisdom & Kitty snogging (as the Brits say), setting up the next issue and beginning his run on the book (he will remain a regular character in the series through to its conclusion with issue #125). 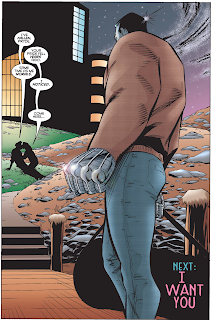 Kitty &Wisdom reveal their relationship to the team, asking that Wisdom remain on with Excalibur. 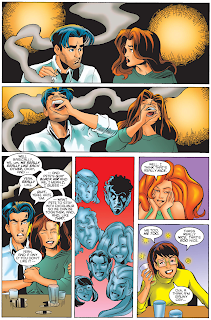 Nightcrawler agrees to it, but he and Brian give Wisdom the “don’t hurt Kitty” tough guy routine. 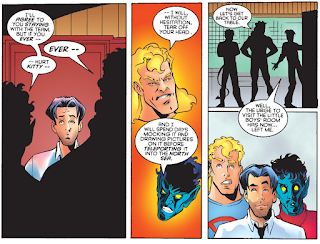 A Work in Progress
Moira is treating a heavily sedated Rory following the loss of his leg last issue (Wisdom makes some jokes about it). 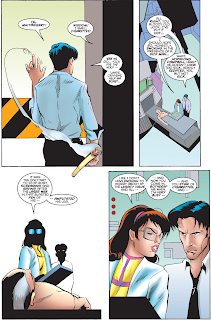 Brian says the last time he and Meggan went to a pub was when he smashed up one in Glasgow, which may be a reference to Excalibur #28 (if it is a specific reference, it goes unfootnoted).

Also going without a footnote is Douglock referencing the time he and Kitty went to a bar in issue #81. 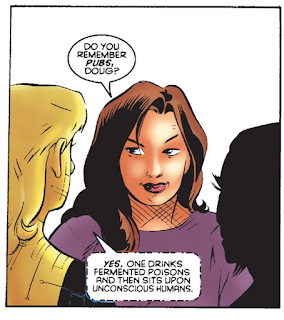 Moira’s father once owned the tavern Excalibur visits, much to Rahne’s shock. 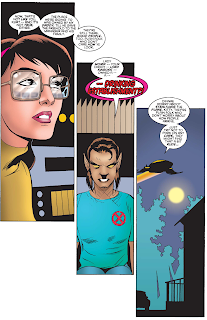 Brian mentions he's not drinking; Captain Britain having a problem with alcohol is an established character trait at this point (with the aforementioned issue #28 having shown him similarly passing on drinks at a pub as a result), but it's not entirely clear if Ellis is aware of that, or thinks he's establishing something new with the character here.

Maybe it’s the fact that I’m writing this in the middle of a global pandemic, but Moira probably shouldn’t be out drinking considering she’s infected with a deadly & highly adaptive disease. 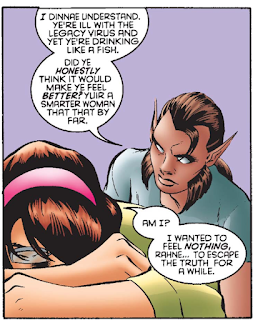 Austin's Analysis
One part a Classic Claremont Quiet Issue, one part a Lobdellian Post-Crossover Quiet issue, and about three parts British pub tomfoolery, this issue is largely held up as one of the highlights of Warren Ellis' run (and therefore, coming during one of the series' three notable/highly regarded runs, one of the highlights of the series overall) and certainly, at least at this point in his run, it definitely is. Taking a step back from superhero action, from subplots involving future selves and killer viruses and evil conspiracies to show the main characters as regular people hanging out together, is almost always a recipe for success, and Ellis certainly rises to the occasion. There's some quibbles here, from the ongoing issues stemming from Ellis' misunderstanding of Kitty's relative age, to Rahne's horror at the concept of going to a pub (which reads much more like the reaction of early New Mutants Wolfsbane, even if the character is, like Kitty, still relatively young here), to the whole business with Moira's dad having owned the pub and Moira been a fixture there as a child (which is the kind of development that seems destined to be ignored outside this issue, and which mostly has - even before the Hickman retcon). And, of course, the shifting, varied art, featuring four different pencilers and three inkers, throughout the issue does it no favors, and largely holds it back from being an all-time classic within the larger context of the X-books.

Still, it's beyond refreshing to have a chance to see these characters as people first for a change, something which arguably hasn't happened since the Alan Davis days. It helps integrate Wolfsbane into the cast, it helps dull some of the edges around Pete Wisdom's author-insert nature, it completes the casting-off of the Britanic nonsense from Captain Britain once and for all. And that final page reveal is one of the series' all time great cliffhangers, as the newly-accepted relationship between Kitty & Wisdom is about to come face-to-face with its first big challenge. Ultimately, this is just a fun issue, and at a time when not just this book but the entire line is digging ever deeper into plot-focused & grimdark stories, that makes it significantly refreshing.

Next Issue
Cable goes back to the future in Cable #25. Next week, Uncanny X-Men '95!