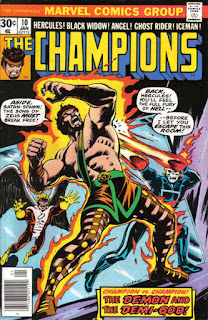 In a Nutshell
The Champions defeat their Russian foes.

Plot
Defeated by their Russian opponents, the male members of the Champions are imprisoned in a vault inside the San Andreas fault; should they try to escape, their actions will trigger an earthquake that will level Los Angeles. The Russians, with Black Widow, Ivan & Bruskin their captives, board a jet and head for the coast, where a Russian submarine is waiting to rendezvous with them. The US Air Force intercedes, and Titanium Man flies out to fight them off. Darkstar is told to do the same, but, disturbed by Titanium Man's bloodthirstiness, she refuses, prompting Crimson Dynamo to go instead. Inside the plane, the history of Ivan & his son is revealed, including the fact that Bruskin played both sides against each other. Darkstar shares this info with Crimson Dynamo, hoping it will end his feud with his father, but he refuses to listen, prompting Darkstar to teleport the rest of the Champions out of the vault. Free, they commandeer a jet and intercept the Russians. In the ensuing fight, Black Widow takes control of the Russian jet while Griffin & Titanium Man are captured. When Crimson Dynamo targets Black Widow, Darkstar intercedes and stops him from harming her, but doesn't stop him from escaping. The immediate threat over, Darkstar returns with the Champions and their prisoners to Los Angeles.