Plot
Confronted by Maul, who taunts her knowledge of Darth Sidious' plans, Ahsoka activates a signal on her gauntlet to alert Rex to her location. As her Clone Troopers arrive, Maul and his forces escape into the tunnels. Later, Ahsoka contacts Obi-Wan, hoping to receive more troops, but he tells her he's setting out to find General Grievous, and that Anakin has been tasked with reporting on the chancellor for the Jedi Council. Just then Rex enters: Maul has captured one one of the Clone Troopers, Jesse. After dispatching Gar Saxon to eliminated the captive Almec, Maul uses the Force to plumb Jesse's mind of knowledge about Ahsoka. At the prison complex, Bo-Katan & Ahsoka question Almec, who is killed by Saxon. Bo-Katan gives chase, but he manages to escape. Ahsoka & Bo-Katan then oversee the shepherding of the city's civilian population to safety, before returning to the throne room to find Maul waiting. As his forces engage the Mandalorians, he tells Ahsoka's he's seen a vision of the future in which they foil Sidious together, and offers Ahsoka the chance to join him. She agrees, until he reveals that he saw Anakin serving as Sidious' new apprentice. Knowing Anakin could never turn to the dark side, and that therefore Maul's vision of the future is wrong, she attacks him. They duel, eventually ending up in the beams of the canopy over the city. As the Republic forces overwhelm Gar Saxon's forces, Maul tries to escape, but Ahsoka manages to grab him with the Force long enough for Rex and a detachment of troopers to arrive and bind him, as Ahsoka looks up at the cracked canopy above her.

Firsts and Other Notables
Maul's rule of Mandalore effectively comes to an end this episode, as his forces are defeated and he himself gets taken into custody after Ahsoka manages to out duel him.

There are several echoes/callbacks to The Empire Strikes Back in this episode: Maul is revealed to have actually been setting a trap for Anakin, not just Obi-Wan, similar to how Vader used Han & Leia to lure a different Skywalker to Cloud City; when Ahsoka & Bo-Katan enter the throne room, Maul is waiting for them, and uses the Force to deflect blaster fire before pulling the weapon away, just like Vader when Han enters the Cloud City dining room to find him waiting; Ahsoka tells Maul "you're find there are plenty of things about me you won't like", which echoes Luke's "you'll find I'm full of surprises" taunt to Vader; and finally, Maul reaches out a hand to a seemingly-defeated Ahsoka and asks her to join him in defeating Sidious, just Vader extends a hand to Luke and asks him to help overthrow Sidious.

There is no newsreel-style narration to open the episode, a first for the series.

A Work in Progress
Per Ahsoka's conversation with Obi-Wan's hologram, this episode is set after the first act of Revenge of the Sith, following the successful rescue of Palpatine and the death of Dooku, just before Obi-Wan sets out on his mission to find General Grievous on Utapau.

Jesse, the Clone Trooper who is tortured by Maul for information on Ahsoka, is a minor recurring character who often appears alongside Rex amongst the other members of the 501st.

Did You See?
Dyden Vos, the leader of Crimson Dawn and the central villain of Solo played by Paul Bettany, is seen briefly in hologram form (alongside Ziton Moj, leader of Black Sun, who previously appeared in the episode "Eminence", and Marg Krim of the Pyke Syndicate from the Martez sisters arc earlier this season) when Maul contacts the leaders of his Shadow Collective. 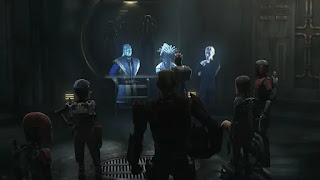 Austin's Analysis
It was always going to be tough to match last week's episode, which was packed with some significant character moments and one of the series' all-time best action sequences. But this episode matched and exceeded that one, presenting an episode that was epic in scope and theme on the same level as any of the films (and even moreso than a few of those...), with not one but two different lightsaber duels which immediately enter into the discussion of all time greats (helped, in no small part, by the fact that the fight choreography was conducted by actors in motion capture suits, including the theatrical Darth Maul himself, Ray Park, who devised a new fighting style for Maul to account for his age and robot legs).

Packed with parallels to The Empire Strikes Back, dripping with a sense of foreboding dread, this is an episode in which the two titular phantom apprentices dance around the edges of Star Wars' central tragedy. With Maul realizing his former master's ultimate plan is on the verge of execution, the episode engages with the Star Wars narrative in the best tradition of the series, adding & deepening the understanding of the film events without contradicting anything that's come before, all the while adding in plenty of surprises (Ahsoka, however temporarily, agreeing to join Maul) yet also, like all good tragedies, being unable to resist the inevitable (making Anakin's fate the thing which pulls Ahsoka back from that alliance is both a smart bit of characterization, and yet also adds a further tragic layer to Anakin's imminent fall: had Ahsoka not been so convinced of his innate goodness, she might have been able to alter his fate). Ultimately then, for the second episode in a row, in terms of characterization, intense action, epic scope, and engagement with the Star Wars narrative, the series has produced an installment that will be tough to top.