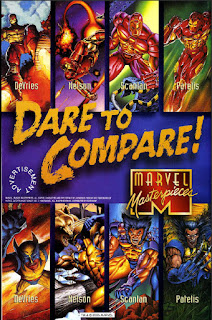 The cards are almost presented entirely in portrait layout, with the card fronts featuring only the Marvel Masterpieces logo in the bottom left corner and the character's name in gold-foil writing in the other corner.

The cardbacks feature the name of the artist who painted the front image, along with a relevant quote about the character written from the perspective of a specific ally, enemy, or love interest of the character, all overlaid atop of smaller, skewed, copy of the cardfront's main image.

Firsts and Other Notables
Art for this series cards came from four artists: Dave Devries, Dimitrios Patelis, Peter Scanlan and Nelson, with each artist painting 38 characters along with two other artists, so that the first 114 cards represent 38 character who each receive three cards, each painted by one of the four artists. Each artist then contributed paintings of nine unique characters each, such that the final 36 cards represent characters receiving one card each (each of those "solo" cards features a comment on the cardback from the artist, usually explaining why they picked that character or detailing their artistic choices). 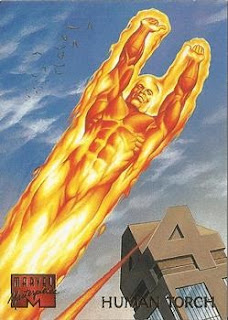 In general, with both the sport and non-sport trading card markets slowing down along side the still-deflating comic book speculator bubble of the early 90s, and Marvel on the verge of bankruptcy, both this set and next year's received significantly smaller print runs relative to earlier series, and as a result, are much rarer these days. The two "Mirage" chase cards in this set, in fact, are amongst some of the rarest Marvel trading cards, and were packaged at a rate of 1 to every 360 packs on average.

The characters are presented alphabetically, with the first 38 character who receive three cards each listed first, then the 36 "solo" characters.

After having numerous characters featured in the previous set, the only character from the 2099 imprint represented here is Spider-Man 2099.

Collection Recollection
This is the first set of cards I've reviewed in which I didn't purchase any of the cards back in the day (I never completed the Marvel Flair sets, but I did buy a few packs). By this point in time, my budget was devoted entirely to the bazillion X-books being published every month (along with some Star Wars, The Avengers, Wizard, etc.), though at the same time, I don't remember consciously deciding not to purchase these: I honestly don't remember even seeing any packs anywhere to buy, had I been so inclined, a testament to their lower print run and the dwindling room in the marketplace for such things.

Also, as someone who remembers trying to track down individual cards in order to complete a set, and the fact that certain character cards (like Wolverine's) were often hard to find than others (thus, felt like an achievement when finding one in a pack), part of me bristles at the "triple card" gimmick, since it dilutes the impact of finding any one specific card (ie "which card is the set's Spider-Man card? Who knows? There's three of them!").

X-Related
Of the 151 cards, 49 or roughly one third of the total cards, are X-related, up slightly from the previous set (which was roughly 25% X-characters). Of course, those numbers are skewed a bit by 14 of those characters representing 42 of those cards, thanks to the "triple feature" approach (also, thanks to the alphabet and the "triple card" approach, the first 15 cards in the set are X-related).

Here is the breakdown by team, with Excalibur being bested by X-Factor only on the technicality that Mystique is part of X-Factor now (even though he card doesn't specifically reference this). If you want to include Colossus amongst Excalibur, then the two teams tie for the lowest representation in the set.

Mr. Sinister's origin as a Victorian-era scientist who made a deal with Apocalypse (which previously hinted at, will be confirmed in the upcoming Further Adventures of Cyclops & Phoenix miniseries) is referenced via his quote on one of Apocalypse's cardbacks. 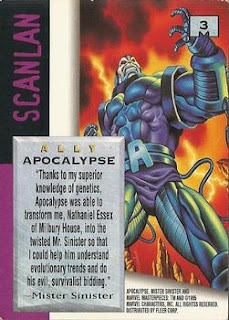 Shard contributes a quote to one of her brother's cardbacks. 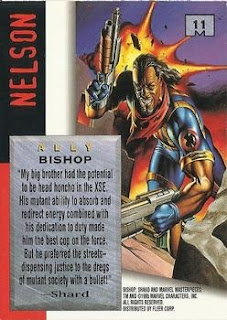 One of Hulk's cards shows him battling the Juggernaut. 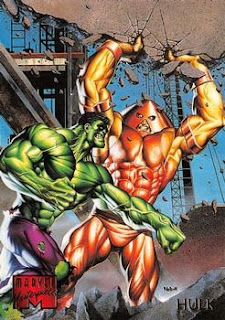 White Queen snarks on one of Iceman's cardbacks about the whole "not fulfilling his potential" subplot. 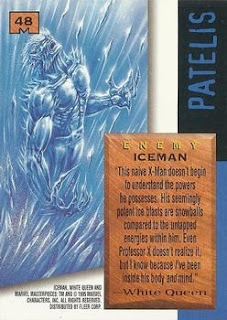 Sabretooth contributes a quote to a Jean Grey cardback, presumably on the back of their interaction in X-Men #28. 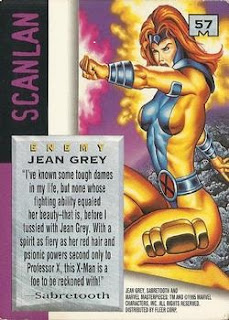 Boomer has a quote about Sabretooth, a nod to the whole "Boomer befriending docile Sabretooth" plotline in X-Force. 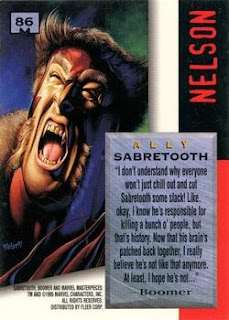 Wolverine's claws appear to be metal in one of his three cards. 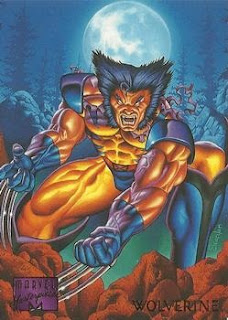 Colossus appears in his Acolyte costume (despite having by now left the group). 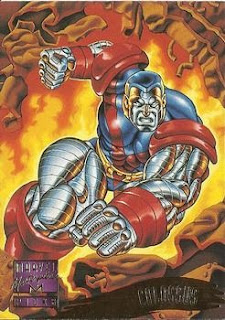 The Grim 'n' Gritty 90s
In a set that avoids a lot of the 90s trappings, Captain America does appear on one card in his pre-armor "straps & pouches" look. 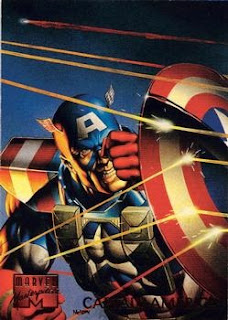 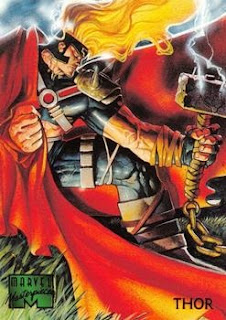 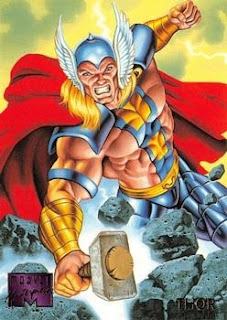 The largely forgotten "Hands of the Mandarian" crossover between Iron Man, Force Works, and War Machine gets referenced. 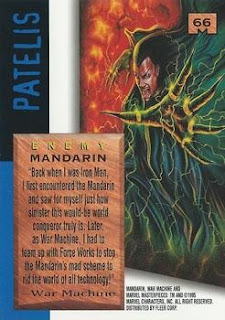 Emplate, the inaugural villain of Generation X, gets his own card. 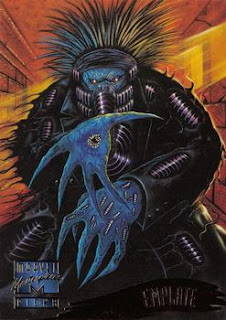 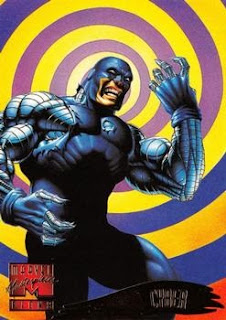 And the Spider clone, Scarlet Spider. 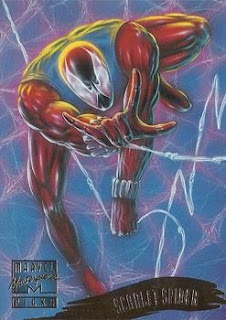 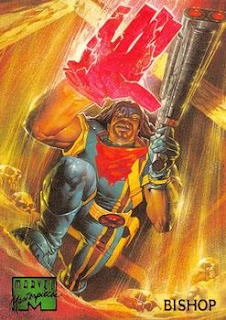 Unique perspective, and I love the glowing hand as an indicator of his power. 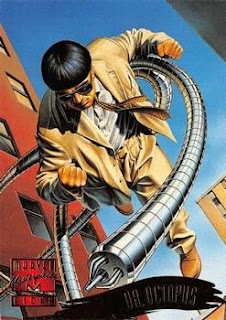 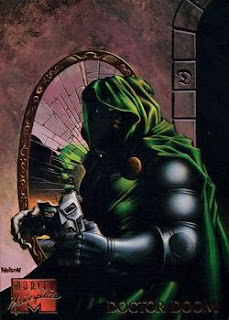 Great use of shadow and light to depict a surprisingly vulnerable Doom. 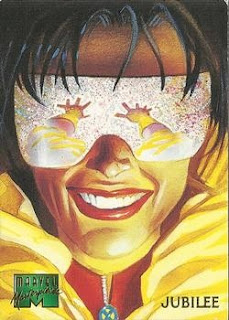 Clever use of mirrored shades. 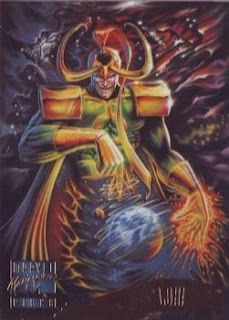 Highlights both Loki's power and ambition. 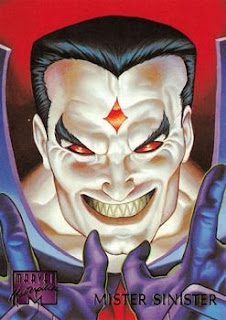 Tons of personality in this one; almost predicts Kieron Gillan's later sassy take on the character. 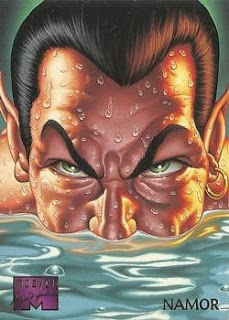 Another card taking advantage of a unique perspective. 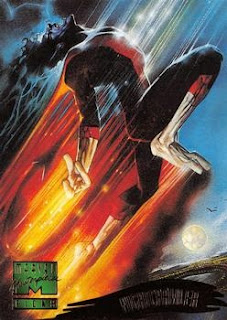 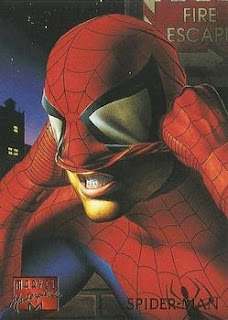 One of the perks of the "triple card" gimmick is that it allows for some less traditional action shots like this one. 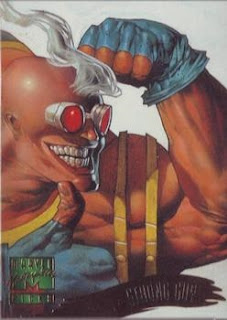 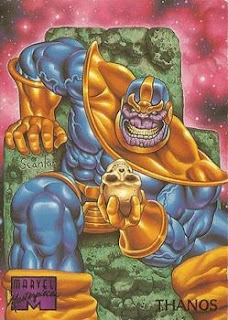 Just tons of personality in this one.

Austin's Analysis
In a lot of ways, this set is a study in contrasts. Compared to the previous, sprawling, series, which devoted cards to 140 unique characters, in the process padding itself out with numerous "of the moment" characters, nearly the entire cast of the debuting Generation X, and large chunks of the 2099 imprint, this set is much more back-to-basics, representing in its 74 unique characters something more akin to the first series' "greatest hits"/evergreen characters approach, setting aside the more flash-in-the-pan 90s characters in favor of focusing on the more classic Marvel heroes and villains. Yet, with its 150 card size, this set is sprawling in its own way,but also, thanks to the"triple card" gimmick, despite that sprawl, it's also highly repetitive.

At times, it's interesting to see different interpretations of the characters (like the trio of Thor cards featuring his different 90s looks); at others, it's more tedious than anything ("here's Wolverine in three different poses").  Padding out the set with a bunch of C- and D-list character isn't necessarily the best approach, but at the same time, it feels like there could be room for some more Avengers, say, or stalwarts from different eras, like Luke Cage or Iron Fist (or, you know, someone on the level of Dr. Strange). But if the goal was to focus on a more core set of characters, then the first series' smaller, leaner card count would have been the better approach to accomplish that. The end result, rather, is a set of cards that somehow feels both incomplete and bloated at the same time.