Plot
On the planet Yerbana, Anakin & Obi-Wan work together to overwhelm a droid force and win the battle, after which Anakin learns he's been contacted by an old friend: Ahsoka. Shortly thereafter, Ahsoka lands on Anakin's flagship with Bo-Katan. They have arrived looking for Anakin & Obi-Wan's help in capturing Maul & freeing Mandalore from his control, action Obi-Wan insists he must run by the Jedi Council, much to Ahsoka's dismay. As he does, Ahsoka reconnects with Anakin & Rex. Eventually, they are interrupted by a klaxon as Obi-Wan rushes in to announce that Chancellor Palpatine has been kidnapped; he and Anakin have been recalled to Coruscant to rescue him. Wanting to help Ahsoka, Anakin splits the 501st Legion and gives it to Rex to command, under Ahsoka's guidance. Newly reinforced, Ahsoka & Bo-Katan return to Mandalore and assault the capital of Sundari. As Ahsoka leads a group of troops into the undercity, Bo-Katan storms the palace & captures Prime Minister Almec, who tells them Maul always intended for her to return with the Jedi, though perhaps not the one she brought. Just then, in the sewers beneath the city, Ahsoka comes face to face with Maul, who says disappointedly that he was hoping for Kenobi as he draws his lightsaber.

Firsts and Other Notables
The "Siege of Mandalore" begins here, with Ahsoka & Bo-Katan's forces fighting to retake Mandalore from the control of Maul, bringing Ahsoka face-to-face with her former Jedi Master for the first time since she left the Order. It marks the beginning of the final story arc of the series.

Anakin & Obi-War are called away shortly after reuniting with Ahsoka, as a result of General Grievous capturing Chancellor Palpatine; in addition to creating an opportunity for Ahsoka to flex some of her newly-focused criticisms of the Jedi gained from the Martez sisters, their departure leads into the opening of Revenge of the Sith, establishing this story as taking place concurrently with that film (which will bring the Clone Wars to their end). As such, this is probably the last time Anakin & Ahsoka will see each other before Ahsoka confronts Vader in Rebels.

The mention of Shaak Ti having failed to prevent the Chancellor's abduction is a reference to one of the Episode III cut scenes, in which General Grievous executes Shaak Ti, having captured her along with Palpatine (it may also be a reference to the first Clone Wars animated series by Genndy Tartakovsky, which depicted Grievous fighting his way through Coruscant to get the chancellor, during which Shaak Ti was the last Jedi standing against him).

Anakin splits his 501st division of Clone Troopers in this episode, giving Ahsoka control of a detachment under the command of the (newly promoted) Commander Rex; presumably this will serve as the means for Rex to avoid the fallout from Order 66 and remain apart from the Empire, such that he's still around (and able to ally with the Rebel Alliance) in Rebels, since he won't be in direct communication with Republic forces/Palpatine as he helps Ahsoka "off the books", so to speak.

Dave Filoni has said the working term for the Mandalorians loyal to Maul was "Mauldalorians", a term I am happily adopting. Two such Mauldalorians, Gar Saxon and Rook Kast, previously appeared in the Darth Maul: Son of Dathomir comic book series (based on an unproduced episode script), which saw Maul escape from the captivity enforced by Darth Sidious and rebuild his power base on Mandalore. This is their first appearance in this series (Gar Saxon will later be killed in Rebels by Sabine Wren's mother Ursa, who is on hand in this episode as well). 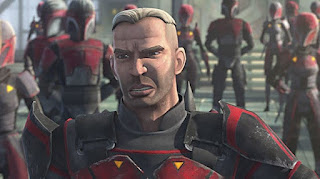 This episode opens with the original Lucasfilm Ltd. title card which appeared before the Original Trilogy film releases. It then cuts to the Clone Wars logo in red, while the main Star Wars theme plays briefly before transitioning to the series' usual, more militaristic take on the theme, all departures from the norm. 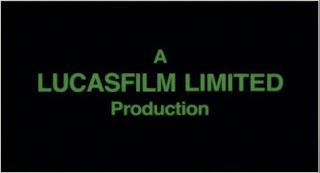 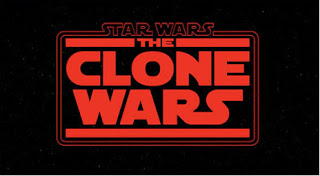 Also, in lieu of the usual episode-opening moral, this episode simply displays a title card with the episode title on it.

Casting Call
Donald Faison from Scrubs (who also provided the voice of Hype Fazon on Resistance) is the voice of the Separatist tactical droid Anakin takes out at the beginning of the episode.

Ahsoka has a new look in this episode, incorporating Mandalorian design into her tunic while sporting beskar gauntlets.

The source of the "Fulcrum" identity, used by Ahsoka (and others) in Rebels (and Cassian Andor in Rogue One) as, essentially, a codename for a deeply embedded Rebel agent, is revealed here to have originated with Anakin, where it was first used as the codename for Saw Gerrera (who, at the time, was fighting against the Separatists on his homeworld of Onderon).

Anakin returns Ahsoka's lightsabers to her, though he's made some adjustments such that they're now blue blades (Ahsoka has traditionally wielded two sabers, one traditional and one of the shorter "shoto" variety, not unlike the one wielded by Luke against Lumiya in the original Marvel Star Wars comic).

The Mauldalorians in general all wear red-accented, spiky armor, reflective of their leader's visual aesthetic.

Did You See?
During the "setting the scene" montage that opens the episode, there's a brief shot of a Jedi Council meeting in which non-present members appear via hologram. One of those Jedi is Depa Bilaba, whose Padawan is shown standing alongside her (adorably mimicking her stance); that Padawan is Caleb Dume who, after surviving the attack on his master as part of Order 66 will eventually grow up to be Kanan Jarrus on Rebels.

Austin's Analysis
After the initial & mostly entertaining introductory arc, built on the back of some previously-released material, and the second, more character-driven but also somewhat mixed, storyline, this episode kicks off the series' final four part story, the long-awaited "Siege of Mandalore" arc, and at least in its first installment, it largely delivers on the hype. Making it clear right from the onset that this is something a little different, a little bigger, a little more momentous, with the altered title cards and theme music, and then reinforcing the arc's position not only as the final story of the season, but of the series, by calling back to the very first episode with the parallel construction, the audience is primed for something big to happen.

And then those big happenings come, one right after another: the origin of the Fulcrum moniker from Rebels, Ahsoka's reunion with Anakin, the call to return to Coruscant and the events of Revenge of the Sith (adding a bittersweet tinge to the opening minutes of the episode as it becomes clear those minutes represent the last time we'll see Anakin as a purely heroic figure, fighting alongside his friend & brother), the splitting of the 501st (thereby enabling Rex to presumably avoid participation in Order 66), and the assault on Mandalore, featuring one of the series' best action sequences as Ahsoka leads an all-jet pack battle against Maul's Mauldalorian loyalists (while not wearing a jetpack herself). It's a breathless start to the series' climatic final act, filled with nostalgic callbacks, continuity notes, character moments, and electrifying action, one which is both satisfying for what it provides, but which also leaves us eager for more.