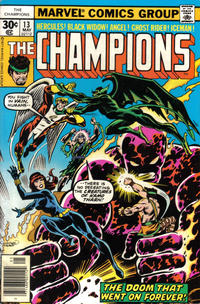 In a Nutshell
Darkstar helps stave off the end of all existence.

Plot
Returning to the Champions' HQ following his battle with Stilt-Man, Black Goliath is sucked inside the Null-Life Bomb which has consumed the building. Meanwhile, the Champions are attacked by Kamo Tharn's beast men even as Hercules reveals he'd already brought to Earth the Runestaff the Stranger sent them to retrieve! During the ensuing battle, Darkstar discovers the portal they traveled through slowly closing, and jumps through, followed closely by Iceman. Back on Earth, Black Goliath attacks the bomb, which triggers its defense mechanisms, manifesting a series of robots to fight him. Meanwhile, Iceman & Darkstar finds themselves drifting through space, while the rest of the Champions are eventually overwhelmed by Kamo Tharn's forces. However, their battle has all been an illusion, as the team remains in the hypnotic thrall of Kamo Tharn. Just then, Darkstar emerges in the null life field surrounding the bomb, and explains to the Stranger what has happened. He fetches the Runestaff from its place on Earth, and Darkstar uses it to restore the universe to its pre-Null-Life Bomb state. With existence saved, the Stranger departs, returning the Champions to Earth. They celebrate their victory, with Darkstar finally feeling as though she belongs, though Hercules finds himself wondering if he, half human, half god, can belong in either world.