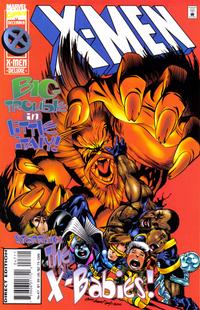 Plot
As Gog & Magog chase the X-Babies through Little Italy, Gambit & Bishop pick themselves out of the wreckage of the nightclub destroyed in their fight with the bounty hunters, then set out in pursuit of them. Meeting up with the X-Babies, Gambit & Bishop engage Gog & Magog again, but are close to being overwhelmed again when Iceman & Phoenix arrive. But even their combined power isn't enough to stop Gog from trying to swallow the X-Babies whole. Just then, Dazzler arrives from the Mojoverse, and orders Gog & Magog back there, before offering to let the X-Babies live with her. With everyone pleased by the arrangement, Dazzler and the X-Babies return to the Mojoverse. Back at the X-Mansion, Professor X calls Boomer into his office; he's made a decision about Sabretooth.

Firsts and Other Notables
Dazzler prompts up briefly in this issue, revealing that she and Longshot are, essentially, the rulers of the Mojoverse following Mojo's death in issue #11, a status quo that never really gets explored much (she next turns up in X-Force #60, as part of the ill-advised retcon to Shatterstar's origin story). 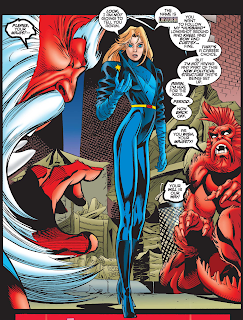 In Dazzler's last appearance in issue #11, it was established that she was pregnant (prompting the offhand Shatterstar comment which will lead to many narrative shenanigans in the future); here, Iceman almost makes a reference to the baby, but is stopped by Jean, who doesn't sense the child within her (which also suggests this story is meant to take place significantly less than ninth months after issue #11, or else Jean wouldn't be expecting Dazzler to still be pregnant...). The question of Dazzler's baby is left dangling as a mystery, but never really gets picked up and taken anywhere after this. 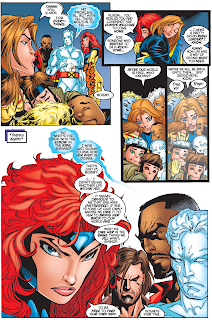 Lobdell, taking advantage of his stewardship over both X-Men titles, uses the final page to set up next month's Uncanny issue, which will bring the "Sabretooth living in the mansion" plotline to a climax, as Xavier calls Boomer into his office to discuss his decision regarding Sabretooth. 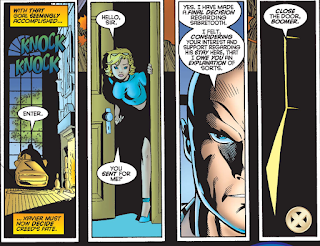 A Work in Progress
The previous issue’s cliffhanger resolve off panel, with Gog & Magog bringing the building down on Gambit & Bishop as the X-babies escape, actions all told through expository dialogue. 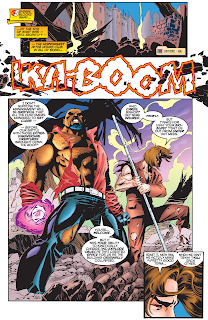 Gambit insists to Bishop that he could never betray the X-Men. Bishop doesn’t entirely believe him. 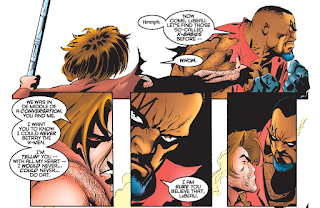 Austin's Analysis
The brief two-part X-Babies story concludes here, and even by the standards of the previous one, this is a flimsy issue. Whereas chapter one at least had some interesting character interactions between Bishop & Gambit and, to a lesser extent, Iceman & Jean Grey, this one jettisons most of that for pure whacky X-Babies hi-jinks, all finished off with the exclamation point of a brief Dazzler appearance and one of Lobdell's patented "toss a new mystery out there and worry about coming up with a resolution for it later (or not)" moments. The whole thing is a brisk, fast-paced read, and not in a good way. Whether it's doing it ahead of the ramping up of "Onslaught" or the arrival of Mark Waid, this whole story is very much what a narrative treading water looks like.