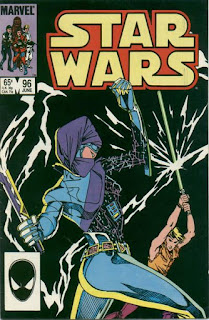 In a Nutshell
Luke duels Lumiya!

Plot
Lumiya deposits the defeated & unconscious Luke inside a holding cell, telling Den she didn't kill him as there are worse things than death. They then discuss the impending arrival of the Nagai fleet, and Den, having learned of the defeat of his allies on Kabaray, asks Lumiya if he can take custody of the captive Dani, in order to learn more about the Zeltrons and how they helped best his fellow Nagai on the station. Meanwhile, Kiro regains consciousness and fashions new breathing equipment for himself before stocking up on tools & weapons and going off in search of Luke & Dani. He infiltrates the Nagai base and frees Luke, who uses the equipment Kiro brought along to fashion a new weapon to help counter Lumiya's lightwhip. The pair then track down Lumiya, and with the help of his new second, shorter-bladed, lightsaber, Luke is able to gain the upper hand on Lumiya, shattering her armor to reveal the scarred face of Shira Brie. Luke tries to convince her to let go of her anger, as the man who made her Lumiya, Darth Vader, did before he died, but Lumiya insists she only wants to see Luke rendered bereft of hope and the will to live. Then she looks up and says he may as well despair now, as the Nagai invasion fleet emerges from hyperspace above them.

Firsts and Other Notables
This issue reveals that Lumiya is the cyborg identity of former Rebel pilot and Imperial double agent (and would-be lover of Luke) Shira Brie, last seen in issue #63 (Luke also reveals to her that Darth Vader is his father, something worth noting since it’s still a relatively big secret). 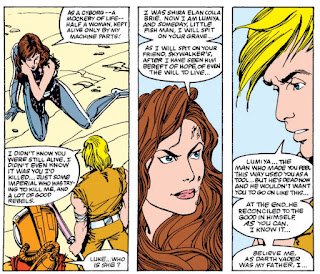 The Nagai (the species to which Den & Knife belong) are so-named for the first time in this issue, and it concludes with their invasion fleet emerging from hyperspace in the skies above Kinooine. 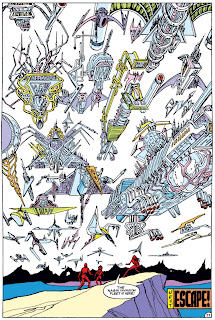 Luke (just with tools, somehow...) creates a second lightsaber, with a shorter blade, that enables him to counter Lumiya’s whip. This is an example of what will come to be known as a "shoto" lightsaber, generally a smaller lightsaber with a shorter blade used by diminutive combatants or as a second, off-hand, weapon for duelists who utilize a twin-bladed fighting style. Both Yoda's lightsaber and one of the two wielded by Ahsoka Tano in The Clone Wars animated series are considered shoto blades, and Luke will wield one again when he battles Lumiya once more during the (non-canonical) "Legacy of the Force" novel series. 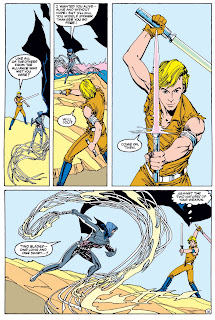 A Work in Progress
Lumiya’s light whip is a combination of laser tendrils and physical ones, which gave her the upper hand on Luke (as it creates more than one attack point he must defend against at once). 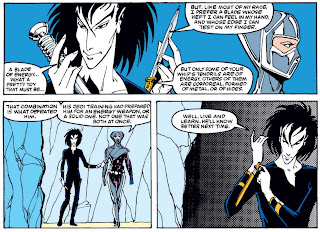 It’s mentioned that both Lumiya & Den serve another master. 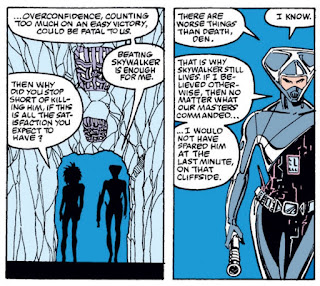 Den & Lumiya learn of the fight on Kabray from the last issue, and the defeat of the Nagai there, prompting Den to focus his efforts on Zeltros and claim the captive Dani to learn more about the species. 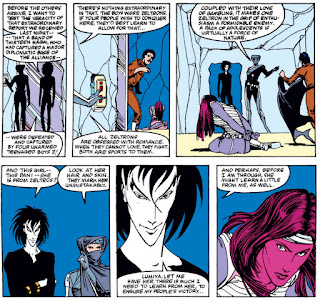 In the wake of being rescued by him, Luke agrees to train Kiro in the ways of the Force. 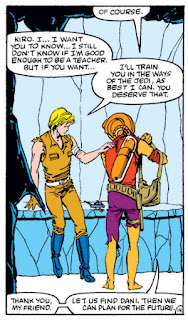 Luke had figured out Lumiya’s identity before destroying her armor and revealing her face. 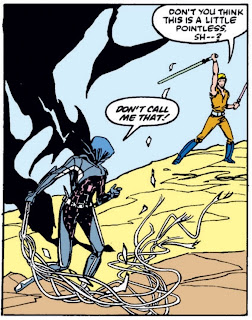 Artistic Achievements
The first seven pages of this issue are a wordless flashback to Luke’s fight with Lumiya in the previous issue. 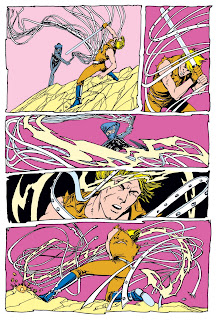 Um, Actually
Luke’s lightsaber hilt is drawn correctly, but his blade is still being colored an incorrect blue.

Use the Force
Luke describes the Force as the power of energy over matter, and mind over both.

Austin's Analysis
After the split focus last issue, this one stays entirely on the Luke/Lumiya confrontation, the better to setup the reveal of Lumiya's identity. The end result is another winning issue, with intense, engaging art from Cynthia Martin book-ending the issue with a pair of lightsaber/lightwhip duels, and a plot that adds to the building Nagai invasion storyline, culminating in the "defeat snatched from the jaws of victory" moment that ends the issue, as Luke stands triumphant over Lumiya just as the Nagai invasion fleet emerges from hyperspace. Martin's art is the star here, but Duffy's plotting is doing its best to match it, as Duffy shows remarkable restraint in tying together the various plot threads woven through previous issues (we know, for example, that Den is referencing the events on Kabray last issue, or that the various Nagai footholds Lumiya mentions are the worlds the Alliance has visited recently which featured resurgent Imperial activity, without Duffy, via dialogue or footnote, spelling all that out). The biggest quibble is that though Lumiya isn't gone from the series yet, her defeat here does feel a bit rushed - another issue between her victory over Luke at the end of the last one and her own defeat here would have been good, especially since this issue recaps Luke's defeat as well, meaning Lumiya's victory lasts, functionally, only a few pages. But that aside, there's little to critique as the Duffy/Martin team finds their groove and brings out the best in the series.

Next Issue
Luke & Kiro vs. an invasion!