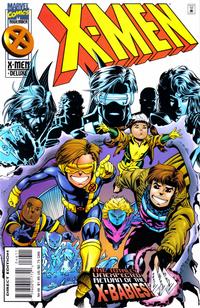 In a Nutshell
The X-Babies, running for their lives, seek out the help of the X-Men.

Plot
At Storm's urging, Gambit takes Bishop out for a night-on-the-town to clear their heads, bringing him to an underground strip club casino. Meanwhile, Jean Grey is at a Manhattan bookstore looking for a gift for her niece & nephew, accompanied by Iceman. The pair are unknowingly watched by someone in the shadows. Elsewhere, Senator Kelly leads a group of heavily-armed soldiers into an secret Sentinel factory, the inhabitants of which have all vanished. When they turn on the power, all the computer screens repeat the same word: Onslaught. Back in New York, Bishop & Gambit discuss Bishop's distrust of Gambit over his actions in Bishop's time. They are being watched by a group of X-Babies, whose emergence triggers a brawl. At the bookstore, Iceman asks Jean to read his mind for any traces of Emma Frost, and they discuss his recent struggles with his powers. Just then, X-Baby versions of Storm & Iceman tumble out of the stacks onto them, arguing with one another. Elsewhere, a woman picking tomatoes in a field comes across a man with flowing gray hair and a beard; he can remember falling from the stars, but the man once known as Magento cannot remember why he is there. Back at the club, the X-Babies are impressed with how quickly Gambit & Bishop quelled the fight. They tell the X-Men they are the run. Just then, the hunters Gog and Magog enter the club, saying they are there to cancel the X-Babies.

Firsts and Other Notables
This issue features the X-Babies, the pre-teen versions of the X-Men ostensibly created by Mojo (though in keeping with tradition, their lineup/costuming represents the current roster of X-Men, despite Mojo himself being technically dead). This marks their first appearance in an issue of an X-book proper (as opposed to in an annual or one-shot). 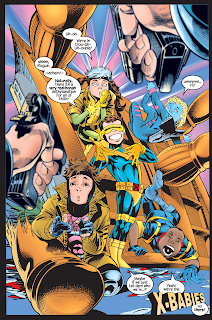 In light of Mojo's death (in issue #11), they are being targeted for death by the new regime in Mojoverse, with bounty hunter man-bear-dogs Gog & Magog (whom debuted in the Longshot miniseries but were last seen in this series' first annual) specifically hunting them down in this issue. 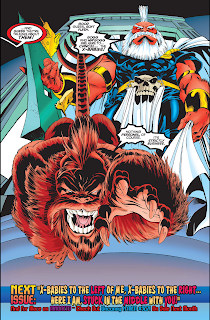 There are a pair of interludes in this issue. In the first, Senator Kelly investigates the disappearance of scientists from a secret Sentinel factory, in which all the computer monitors are displaying the word "Onslaught"; Onslaught's interest in Sentinel technology is one of those things that is used to tease the upcoming story but which clearly falls under the category of "making it up as they go along", since the ultimate reveal of Onslaught's identity doesn't really gel with him being terribly interested in doing anything with Sentinels aside from destroying them (they'll ultimately be used as a sort of security force for Onsalught during the crossover/easy foils for characters in tie-in books). 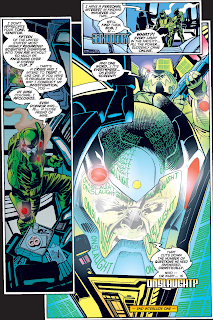 Also, Senator Kelly being gung-ho about Sentinels is somewhat at odds with his less stridently anti-mutant views of late (relative to his earliest appearances).

The second interlude shows a still-amnesiac Magneto waking up in a field (his first appearance since the fall of Avalon), a setup for Uncanny #327 (which will explore Magneto's apparent return more fully), making this technically the first appearance of Joseph. More on that when we get to that issue. 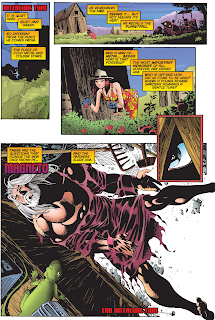 Bishop gets a new buzzed haircut this issue, leaving behind his former mullet-y look and making him more visually reminiscent of his Age of Apocalypse look (he'll get a new costume to go with it shortly as well); this will be his default look moving forward until the launch of his solo series.

Scott Lobdell writes this issue, though he's technically just filling in until Mark Waid arrives for his brief run. For the time being though, that puts Lobdell in charge of both X-Men books.

This issue’s cover is, of course, an homage to Giant-Size X-Men #1.

A Work in Progress
With Storm urging Bishop to get out of the mansion to clear his “Age of Apocalypse” head, Gambit takes him to an underground strip club...casino he’s known to frequent, kicking off an Odd Couple pairing between the two former antagonists (recall one of Bishop’s first acts as one of the X-Men was to accuse Gambit of betraying the team), which will culminate in the pair sharing a limited series together towards the end of the decade. 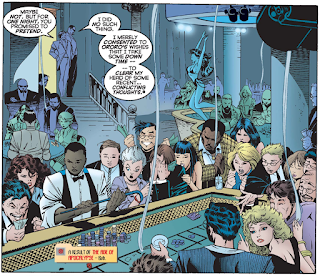 This issue also kicks off a minor recurring bit in which Bishop orders Dr. Pepper whenever he goes out. 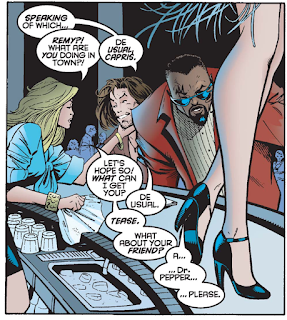 Bishop brings up the whole X-Traitor thing, revealing to Gambit his status as the Witness in Bishop’s future, presumably as Lobdell reminds readers about that particular plot thread ahead of it’s reveal kicking off “Onslaught”. 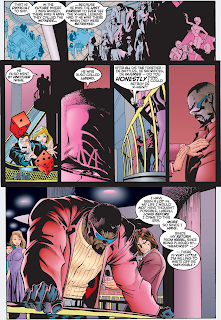 Jean is shopping for a present for her niece & nephew, the children of her sister Sara (whom we now know was captured & killed by the Phalanx) who last appeared at her wedding in issue #30.

Continuing the Emma Frost/Iceman sucks at using his powers subplot, Iceman asks Jean to check his head for Emma Frost. They also discuss his power, with Jean suggesting that it's not a bad thing that Iceman has repressed his powers through the years. 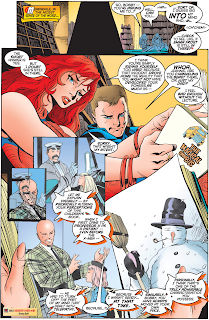 The Grim 'n' Gritty 90s
Iceman is rocking a pair of carpenter jeans & a wallet chain while shopping with Jean at a bookstore/coffee shop Barnes & Noble stand-in, a combo which is ubiquitous now but was very much of its time in ‘95.

Austin's Analysis
With Fabian Nicieza gone, Scott Lobdell steps in ahead of Mark Waid for an issue which kicks off a two-part story which, in turn, is the beginning of a series of two part stories ahead of the start of "Onslaught" proper (technically, issue #50 is a standalone story teasing "Onslaught", but it is double-sized). And, presumably drawing on his background in comedy, Lobdell taps the X-Babies for a somewhat more lighthearted tale following the high drama of "Fall from Avalon" and the emo angst of last issue. It's all mostly setup here (just a few bits with the X-Babies, to your enjoyment or dismay depending on how you feel about them) laced around some quieter character moments (which actually is Lobdell's genuine strength): Bishop & Gambit bonding and reminding readers of the X-traitor storyline, Iceman (in a subplot ported over from Uncanny) asking Jean for help clearing his head of Emma Frost's influence/his doubts about his powers, Jean shopping for her oft-forgotten niece-and-nephew. Nothing groundbreaking, for sure, but the kind of slice-of-life storytelling the series needs to do when it can (i.e. between big anniversary issues & crossovers).