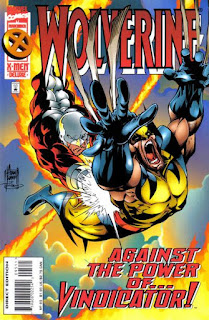 Plot
In Egypt, Cyber battles a robotic Wolverine as the Dark Riders monitor him, pleased with the results. In New York, Wolverine is walking the streets, monitored from afar by James & Heather Hudson. He oversees a strange man named Dirt Nap try to sell a kid some stolen computers & intervenes, drawing Dirt Nap's ire, but James gets involved before Wolverine can attack, thinking he's lost control, which allows Dirt Nap to escape. He & James almost come to blows, but Heather breaks them up, and Wolverine says he needs a cup of coffee. Meanwhile, at the offices of Senator Kelly, Kelly's aide Noah receives a call from Zoe Culloden, telling him they've released "the napper" too soon, but the plan is still afoot to rendezvous in the Canadian Rockies. Back in Manhattan, Wolverine spots Dirt Na outside the diner, having taken control of another host. He runs out to attack him, but is possessed himself. However, Wolverine's healing factor expels Dirt Nap, forcing him into the body of a nearby rat, which quickly scurries away, saying his boss still has big plans for Wolverine. In the wake of the attack, James apologize for doubting Wolverine, and tells him to come home to Canada with them so they can reverse his regression. But Wolverine says, after all these years of fearing it, he's starting to like his wild side now that it's taking over.

Firsts and Other Notables
This is the first appearance of Dirt Nap, a mutant with the ability to possess other people/animals (it's never entirely clear what, if anything, Dirt Nap's "default" form is). He will appear in the next few issues up through issue #100 (where it's revealed he's working with the Dark Riders, with the Genesis the boss he teasingly mentions in this issue), in the form of the rat he possesses at the end of this issue, then again in a Venom limited series and for a few Generation X issues during Larry Hama's run on that title. 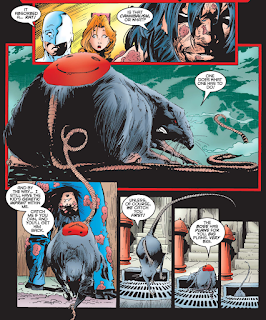 This issue indirectly confirms that Senator Kelly's aide Noah is the guy who's been hanging out with Zoe Culloden watching Wolverine in the previous few issues, as she calls him to discuss the release of Dirt Nap and their ongoing "plan" involving Wolverine. 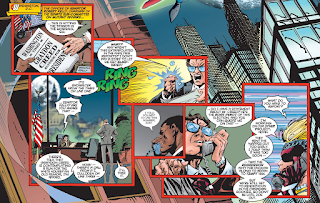 James & Heather Hudson are on hand once again as guest stars.

The Reference Section
Wolverine and the Hudsons grab coffee at a diner called Hoppers, a reference to Edward Hopper's famous painting "Nighthawks" (which features a similar-looking diner). 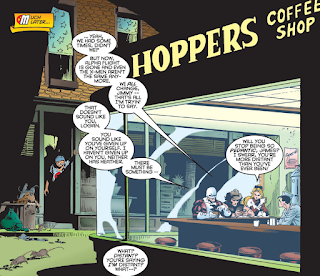 The Best There is at What He Does
While being tested by the Dark Riders, Cyber taunts the Wolverine robot with mocking versions of Wolverine’s catchphrases. 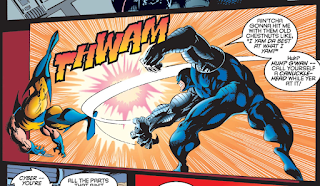 Austin's Analysis
Hama continues his series of done-in-one stories chronicling Wolverine's struggle with his growing animal side, with this issue establishing that he's starting to embrace that side of himself instead of fight it. Kubert's return after having last issue off definitely helps liven things up, but Dirt Nap is still a fairly standard "posessor" villain (like Malice, complete with a physical indication that a subject is being possessed, in this case, the red smiley face that appears on all his hosts) whose most interesting characteristic (possessing a rat, thereby becoming an evil, sentient rat) doesn't occur til the end. And while setting up the Hudsons as the angel/devil on Wolverine's shoulders (with one believing he's giving in to his worst impulses, the other arguing steadfastly for his innate humanity) isn't a bad idea, their presence don't add a whole lot to the story aside from some manufactured drama (if anything, this would almost work better if they were figments of Wolverine's imaginations, like when he was hallucinating Carol Danvers & Nick Fury in the post-Outback days). So not a bad issue, but with issue #100 looming, it's becoming clear the resolution of this plotline isn't going to come until then, and as a result, it feels a bit like Hama is spinning his wheels here.