"On the Wings of Keeradaks"

The Moral of the Story
Survival is one step on the path to living.

Plot
Anakin & the Bad Batch hold off the Techno Union forces as Tech & Rex work to free Echo. As Wat Tambor closes in, Echo is freed and directs the group to an exhaust pipe above them. Thanks to Wrecker's strength and Anakin's Jedi abilities, the group escapes, with Wrecker leaving behind a handful of detonators to destroy Tambor's "science experiments". As Anakin and the clones try to escape the citadel, they're surrounded while perched on a narrow pipe high above the ground. Tech, using recordings he made of their cries, calls a flock of keeradaks to them, which they mount & fly away. The keeradaks deliver the Republic soldiers back to the village of the Poletecs, and Rex gives an impassioned speech urging them to take up arms against the Separatists. They agree, and fight side-by-side with Anakin and the clones when the Techno Union attacks. Together, they drive back the droid forces, much to Wat Tambor's dismay, who is determined to recoup the lost profit as a result of Echo's escape. As the Republic troops prepare to leave the planet, Rex apologizes for not finding Echo sooner, and promises him everything will soon be like it was, though Echo seems less sure of that sentiment.

Firsts and Other Notables
The original unfinished version of the episode featured a scene in which Anakin attempted to negotiate Echo's release with Wat Tambor, during which Tambor demonstrated the destructive capabilities of the spherical Decimator droid on a captive Poletec.

A Work in Progress
The new battle droids seen in the previous episode are revealed here to have wings and flight capabilities, with their forms mimicking those of the keeradaks ridden by the Poletecs (they are also technically called D-wing droids, similar in their transforming nature to Vulture droids). 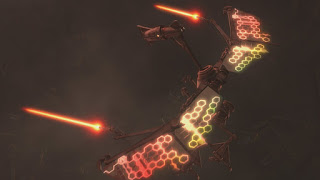 The large tripod-like droids the Techno Union uses in the battle against the Poletecs are Octuptarra; smaller non-flying versions appeared in Revenge of the Sith.

Echo's various cybernetic enhancements make him another one of those characters (like General Grievous and the revived Darth Maul) who serve as a prelude of sorts to Darth Vader's later transformation into a being more machine than man. More specifically, one of those enhancements replaced one of Echo's hands with a scope link, the extendable interface that Artoo often uses to communicate with computers throughout the saga.

Austin's Analysis
This is perhaps the most perfunctory episode of the new season, a fairly standard action-heavy "get the heroes out of a jam" affair. It the lacks the zing that came from the introduction of the Bad Batch in episode one, or Rex's near-hysteric belief in Echo's survival (and that Anakin/Padme sequence) from the second episode. Instead, it returns to one of Star Wars' classic tropes, the old "technologically-deficient natives help the heroes fight off a technologically-superior foe" routine. The end result leads to some legitimately entertaining action scenes (Anakin leading the clones in taking down the Techno Union tripods is a particular highlight), but in the grand scheme of things, there's little here beyond that. It remains to be seen how the storyline concludes next episode, but at this point, this episode feels more like filler than not.