They can destroy and leave no traces
Dreadnoks!
The evil is written all over their faces
Dreadnoks!
A horrifying new foe of G.I. Joe
G.I. Joe, a real American hero
Fighting evil Cobra!


Now this one is confusing. Some online databases actually list this as an ad for issue #35, from May 1985. It's obvious in this archived version that it's issue #30 being advertised...not only from the cover, but because the events from the ad pretty much match what's in the comic. 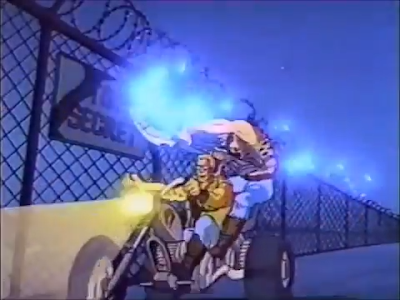 Yet, another archived version of the ad is clearly for issue #35, as seen on the 3D Joes Youtube page. That's quite obviously the John Byrne cover for #35 (the one where he famously arranged the Dreadnoks to avoid drawing as much of their motorcycles as possible.)

It seems likely that Hasbro wanted another comic ad but didn't have one ready for the next scheduled issue. Since issue #35 is also Dreadnok-heavy, maybe they guessed no one would notice? Regardless, it's one of the better commercials. 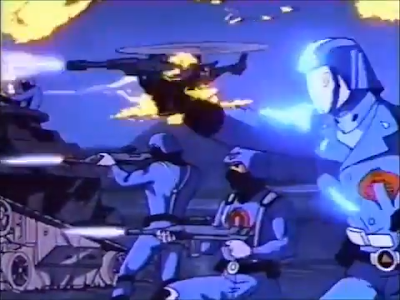 The night effects look great, and there's plenty of mindless action that perfectly suits the Dreadnoks. Most of the character animation is also impressive, giving you the impression this could've appeared in one of the better-animated episodes of the show.

We also have the final appearance of Snake-Eyes in his original uniform at the end...a model that was already out of date, as this had to have aired after the second Joe miniseries. And the cheesy commercial jingles are back...complete with a raspy, soulful voice you'd have to assume never thought he'd be doing a covert toy commercial. 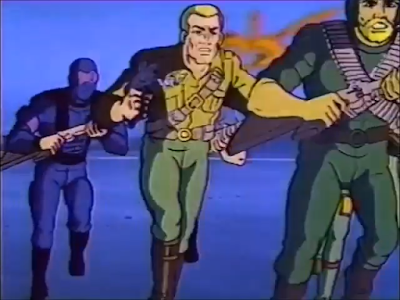 Issue #30 holds a personal significance, as it was one of the earliest issues I read in the Marvel digest reprints. The issue is the first to feature the Dreadnoks doing more than standing behind Zartan, and also marks the debut of their chocolate covered donuts and grape soda gimmick. (It's obvious in retrospect Hama was drawing from his Carl Barks influence. He's stated the Dreadnoks are his version of the Beagle Boys.)

Cobra Commander's son Billy also has a significant issue -- it's the first time he appears "on-model," having previously appearing as perhaps Asian or American Indian in his initial appearances. (Hama hadn't decided yet that the scrappy kid rebel from Springfield would be the Commander's son.) The Frank Springer art also has a Russ Heath vibe to it, which helped to ease me from the show to the comics as a kid. The Springer issues give you a sense you're watching a more intense, less silly version of the cartoon, which greatly appealed to my eight-year-old sensibilities.

Hopefully, I'll be able to continue this series in the future. In the meantime, you can check out my Kindle Worlds Joe series for free at Smashwords...and the audiobook of my novel Black Hat Blues (featuring incredible voice work from Brian L. Knutson) is now available at Audible. You might quality for a free Audible trial if you follow this link...